Hey everyone….Anya here & I’m back with Part 2 of my interviews with the cast & crew of SyFy’s Wynonna Earp.

This time I talk to Melane Scrofano who plays Wynonna and Shamier Anderson who plays Agent Dolls, the leader of the Black Badge division. OMG they were so nice, as you will see.

This is also a really cool interview because Melanie talks about who she’d like to watch the show and she emotionally talks about how her character is complicated and not only what she appears to be. She’s vulnerable, but can kick butt.

And at around 11:22 they give our Tweeks microphone some love. :)

This is such a great show with great girl hero roles. If you want to watch it it’s on SyFy on Friday nights at 10 pm.

At WonderCon, Anya got the chance to sit down with the cast and crew of the SyFy channel’s newest show, Wynonna Earp. Based on the Wynonna Earp comics by Beau Smith, the show follows Wyatt Earp’s great great granddaughter as she carries on the burden family curse…and also gets to kill evil things.

The show is a bit different from the comics as Wynonna is younger and just gaining her powers. There is also a sister dynamic that has been explained as a little like Frozen meets Buffy The Vampire Slayer meets X-Files.

One of the coolest things about this interview just might be how much of a comic nerd Tim Rozon turns out to be!

In parts 2 & 3 of the interview Anya will be talking to show runner Emily Andras, comic creator Beau Smith, and stars Melanie Scrofano and Shamier Anderson….so make sure to come back to watch those.

Wynonna Earp airs on SyFy on Fridays at 10pm. It’s also on CHCH in Canada. The show started on April 1st, so quickly….go catch up. It’s a 13 episode series, so you have time! 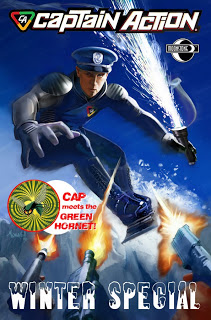 I must confess up front that I know little about Captain Action. I am familiar with the toy though I’ve never actually seen one in person and I did read the Captain Action # 0 that came out a few years back. That’s the extent of my Captain Action knowledge so I went into this issue not really sure how well I’d be able to follow the action.

The cover proudly proclaims that in this issue Captain Action meets the Green Hornet — and that titanic team-up does occur, though it’s in the form of a prose story and not a comic tale. The story is by Matthew Baugh and hits most of the right notes. I appreciate that Moonstone is trying to mix prose and comics but I sometimes think that they’re not clear enough in the solicitations or covers about what you’re actually getting when you buy a book. I assumed this would be a comic book tale and was looking forward to seeing the heroes illustrated together. I did enjoy the story, however.

The opening comic strip in the issue is by Smith and Barreto — and it lives up to both creator’s past works. Beau Smith always delivers action-oriented tales and Barreto has long been one of my favorite underrated artists. There’s nothing earth-shakingly new in this story and parts of it (the ending, in particular) seemed very much out of a James Bond story, which I suppose was the intent.

The Lady Action tale follows that one. I have to say that I chuckle every time I say Lady Action. “There’s nothing I like better than some Lady Action!” This story is entitled “The Spy Who Snowballed Me” and that made laugh, too. The art is really nice and I enjoyed the story a good bit. I’m curious about having more Lady Action in the future. Hah! Sorry, I couldn’t resist.

The final comic story is an Action Boy tale — it shows how little I know about the Captain Action universe because I didn’t know there was an Action Boy. The story follows the trend of the first two, putting the hero into a wintry setting and proceeding to tell an action-oriented story. The art was nice but seemed a little too sketchy for my tastes.

Overall, I enjoyed the issue enough to check out upcoming releases. I’m especially interested in Honey West getting some Lady Action in that team-up they teased in the ads!