Ed Catto: It Creeps! It Crawls! Beware the Comic-Con! 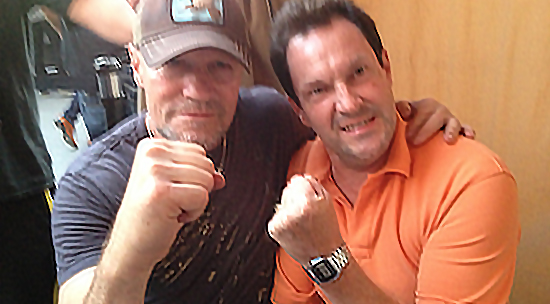 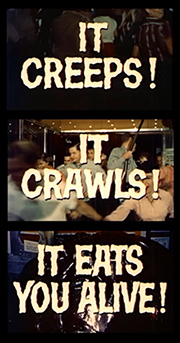 It’s indestructible! It’s indescribable! Nothing can stop it!

Every one of you watching this screen should look out! Because soon, very soon, the most horrifying monster menace ever conceived…

No, this isn’t advertising copy for a comic convention coming to your town. These lines are from the trailer for that old monster movie, The Blob. But it could be used to describe any upcoming comic con.

Comic conventions are not only thriving but, like the Blob, they are now oozing out from the walls of their convention centers and invading local towns. Geek culture cannot be held within its original confines.

Who would have ever thought, way back when Geek Culture was nestled in little comic shops in the scorned section of town, that we’d get to this point? Unlike the foreboding tone of that Blob movie trailer, this expanding, oozing primordial mass inspires a sense of awe and wonderment. 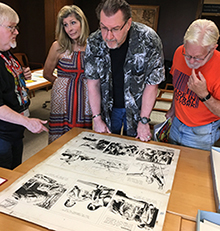 The San Diego Comic-Con is probably the best example of this. The nation’s longest running convention is held annually at the San Diego Convention Center. (And it will be held there until 2021, but that’s a whole ‘nother column.)

The entire city seems to get behind this show. Most of the shops, bars, and restaurants in San Diego offer specials and decorations to welcome convention attendees. It seems like every waiter and waitress is wearing a comic book or Walking Dead themed shirt, in fact. And the show itself is so sprawling, it now schedules events in nearby hotels, local libraries, and even the town baseball’s stadium.

I have a great friend who lives in San Diego. Walshy, as we’ve called him since grade school, doesn’t know anything about comics or pop culture. Check that – he loved MAD magazine. That counts. But by and large, he just doesn’t have a passion for graphic novels, or science fiction, or horror movies, or Doctor Who, or any of the cool stuff at the San Diego Comic-Con.
But each year he attends Comic-Con and has a blast. There is one particularly wild story about how he partied with Michael Rooker (“I’m Mary Poppins, y’all!”) and Miss Venezuela on a hotel rooftop… but we’ll save that one for another day as well. 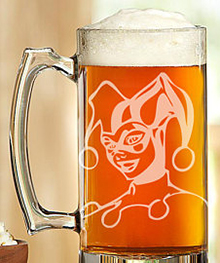 Walshy throws himself into San Diego Comic-Con because, as a resident, he can’t escape it. It’s so big and so boisterous that it’s all encompassing, even for locals.

And the great news is that Geek Culture is very welcoming. It pitches a big tent and invites everyone to come on in and have some fun.

The same thing is happening at other conventions. New York Comic-Con now hosts “Super Week” before their show, for example. Not surprisingly, it’s also happening at the up-and-coming shows in smaller markets.

Over the past year, I lent a hand to help grow Syracuse’s Salt City Comic-Con. It was a rousing success: it doubled in attendance and exhibitors reported very strong sales. It was officially held at the local convention center in the middle of Syracuse’s downtown area. But in reality, the event stretched to make the two days of the comic-con much longer.

So even in a market like Syracuse, Geek Culture has creeped and crawled to ooze out beyond the confines of both the calendar and the convention center to become something bigger. Unlike the teenagers and townsfolk in The Blob, I’m not terrified. I’m elated! And you should be too.