Tagged: As The World Turns

Mindy Newell: As The World Turned 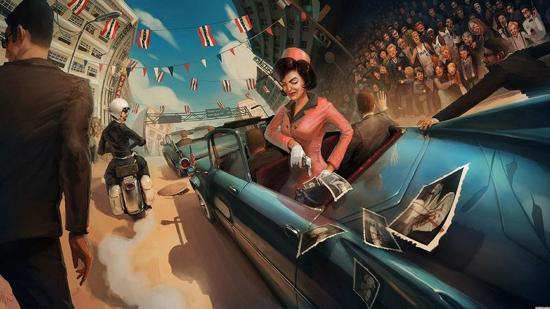 “Here is a bulletin from CBS News… in Dallas, Texas, three shots were fired at President Kennedy’s motorcade in downtown Dallas. The first reports say that President Kennedy has been seriously wounded by this shooting.” • Walter Cronkite‘s first news flash on the shooting at 1:40 P.M. EST, interrupting the CBS soap opera As The World Turns. It is an audio-only report over the “CBS News Bulletin” slide on the screen.

“From Dallas, Texas, the flash apparently official: President Kennedy died at 1 p.m. Central Standard Time, 2:00 Eastern Standard Time, some 38 minutes ago – pause as Cronkite fights back tears, then regains his composure – Vice President Johnson has left the hospital in Dallas, but we do not know to where he has proceeded; presumably, he will be taking the oath of office shortly and become the 36th President of the United States…” • Walter Cronkite announcing the death of J.F.K., 2:38 P.M. EST, November 22, 1963

Being a sucker for both time-travel and alternative history stories – genres that are not necessarily exclusive – I read Stephen King’s novel when it first came out and liked it fine, though I did think it was a little dry at times and a bit overly long and, dare I say, padded? I looked forward to the mini-series when it was first announced, and loved the first episode. Then, because Hulu was releasing each episode on a weekly basis, and being busy with that annoyance called life, I got really lazy about staying current – well, I wouldn’t say I forgot about it, but every time I reminded myself to watch 11.22.63, something else popped up.

Finally, inspired by Bobby Greenberger’s review of 11.22.63 here, I spent most of yesterday binging on the Hulu mini-series, which is now available at the site in its entirety. (Really, Hulu, deciding to dole it out like a weekly television show in this day of streaming and instant gratification was a really dumb idea. Take a clue from Netflix, why don’cha?)

I gotta say, it was definitely worth the wait.

Every generation seems to have at least one seminal historical event, and for us baby boomers, the assassination of J.F.K. was it – well, it was for me, anyway. 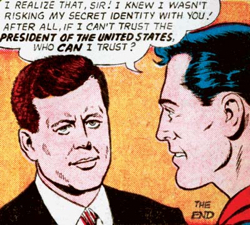 I was 10 when the President was murdered as his motorcade passed through Dealey Plaza in Dallas, Texas; I was in my 5th grade classroom, doing math, when the principle of the P.S. 29 on Staten Island came and knocked on the door, gesturing to my teacher to come out into the hallway. One moment that has been impressed onto my mind is the moment I saw my teacher through the window of the classroom door – I was watching her instead of doing my math problem – put her hand to her mouth, and then turning and pulling down the shade of the window, blocking my view.

Teachers never did that when called out into the hallway, they wanted to be able to keep an eye on us. I sensed immediately that something was, well, off, and I got scared. A few moments later, she came back into the room and told us to close our books. “Now, very quietly, I want you to go to the closet and get your things. Everyone is to go straight home today, okay? No playing in the schoolyard or the gym. Will you promise?” We all hummed yes. I don’t know if the other kids felt anything, but my fear was now in the pit of my stomach. The teacher led us outside. A lot of cars were already out there, parents waiting for their children.

I found my brother, then Sandra and Chrissie and Tommy and Patty – we all lived on the same block – and started walking home. Oh, and also, Chrissie and Tommy and Patty all went to St. Theresa’s, the parochial school across the street from P.S. 29, and they had been let out early, too. I was so scared; I kept my eyes on the sidewalk all the way because I was convinced that the Russians were coming and about to drop a nuclear bomb on us, and I didn’t want my eyeballs to melt or go blind or see the sky light up on fire; this was not the result of the Cuban Missile Crisis, a year earlier, but from my parents in their wisdom taking me and Glenn to see Dr. Strangelove or How I Stopped Worrying and Learned to Love the Bomb instead of getting a babysitter. Good job, Mom and Dad! – although, in their defense, those were also the days of air raid sirens and drills, during which us li’l boomers were marched into the hallway of the school and told to turn and face the wall. I don’t remember if Glenn was scared, but Sandra and Chrissie and Patty were happy to have gotten out of school early. Tommy, who was 11, told them to quit fooling around and walk.

Yeah, that was the beginning of a fun weekend, no doubt ‘bout it.

I’ve always thought that the “60s” really began on November 22, 1963 with the three bullets that killed Kennedy also killing the “pretend” United States; domestic and sexual abuse, homophobia, racism and political unrest are all there, just hidden under the red-white-and-blue patina of American nostalgia. And the success of 11.22.63 (the mini-series, nor the book) partly lies in its ability to capture the general population’s innocence of what was coming; the generation that had stopped Hitler and saved the world 15 years earlier was, at worst, complacent about America’s problems and, at best, willfully ignorant.

The other part is the cast, especially James Franco as the man out of time and on a mission – to stop Kennedy’s assassination. The tension rises slowly, cresting in the last three episodes, as Bobby G. said in his review, so that I didn’t even want to pause it to get up and answer the door for the pizza I had ordered for dinner.  In fact, I had to resist jumping to the last episode to see what happened (would it be true to the book? Thee were enough – really good! – differences so I wasn’t sure), so great was my anticipation.