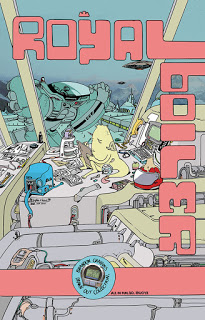 Royalboiler  is an oversized paperback with full-bleed art most of the time — it’s a great size and format for an art book, and really makes the covers (here presented without logos) show up well. That does mean, though, that text is minimal and mostly restricted to some captions on pages where they can be accommodated. The captions are also all in Graham’s lettering font — I can’t say if they’re all hand-lettered or not; does anyone actually still do that? — so they look like they’re part of the underlying art if you don’t slow down and pay attention.

But the point of an art book is to slow down and pay attention, so I don’t consider that a problem.

There is minimal text here, again: just enough to say what this piece of art is, maybe who worked on it with Graham or what year it was done. But there is enough, from those captions and a few semi-autobiographical strips and some collages of photos and artwork from conventions, to piece together a bit of Graham’s life, or at least the parts of his life that he wants to present in his art in public.

So it starts out with covers from King City  and Multiple Warheads  and then goes into some of his odder, earlier, obscurer, or more collaborative projects — Prophet and Perverts of the Unknown and October Yen and so on, and then into lots of art for conventions and covers for other comics. After that comes the Comic Lovers strip for Image Plus, other odd pieces about comics, and so on.

There’s a lot in here — the book has no page numbers, but informed sources claim it’s 248 pages, and that seems about right. That’s almost 250 big pages full of interesting art by a quirky creator — the one thing I would note is that his cover/sketch work is often less dense than his story pages, so there aren’t as many buried jokes or puns in Royalboiler as there are in his narrative comics. Or, maybe, they’re buried even more deeply, so I missed them….