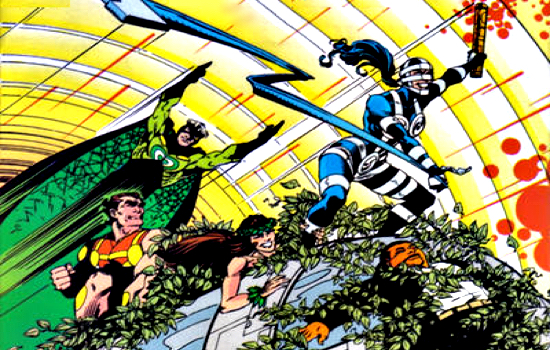 As I pointed out last week in this column, there is a plethora of John Ostrander related material out there this month for you to buy. You’d think it was Christmas or something.

In the previous column occupying this space, I talked about the first volume of my Heroes For Hire series put out by Marvel. This week we’ll look at Volume 5 of Suicide Squad from DC that is coming out December 27. This one is titled Apokolips Now and the major story arc in the volume takes the Squad to the home of the nastier set of New Gods, Apokolips.

Lots of stuff happens in this volume. Three members of the team die, some walk away, some long running subplots are put to rest – including the revelation that Barbara Gordon is Oracle. By the end the volume, the Squad’s existence has been exposed and so has Waller’s running of the team… and she winds up in prison. Lots of story is crammed into this one TPB.

I want to focus for the moment on the first story in Volume 5. It’s one of the Personal Files that my late wife and co-writer, Kim Yale, and I would do from time to time. Each Personal File would center on one character and through them we would see other members of the team. There was never a mission in the Personal Files; you could think of it as an “All Sub-Plot” issue but I think they were highly effective and, as I recall, very popular with the readers.

This time we focused on Father Richard Craemer who was the spiritual adviser to the Squad. That probably sounds odd but the Squad was secretly headquartered in Belle Reve prison that had an active convict population and Craemer was also prison chaplain. In addition, Craemer was also a qualified psychological therapist and served the Squad that way as well.

Craemer is one of my favorite characters and Kim and I had a very definite agenda in creating and using him. At the time, almost every time you would get a priest or minister or preacher of what have you in comics, they were hypocrites – venal, and frankly rather despicable characters. That simply wasn’t either my nor Kim’s experience. That’s not to say those types aren’t out there and the revelation of pederasts among the clergy is well documented and, frankly, sickening. But not every member of the clergy is like that. It became a cliché, a stereotype.

However, Kim and I both had near relatives who were in the clergy. Kim’s father, the Reverend Richard Yale, was an Episcopal minister, a Navy chaplain and a counselor. My mother’s sister, Sister Mary Craemer, was an administrator at Mundelein College in Chicago and later was very active on behalf of senior citizens. Both were very good people and we wanted a character who would reflect that. And as you may have noticed, we borrowed from the names of them both to create the name of our character.

Father Craemer has a lot of humility and a great sense of humor which he needs in dealing with Waller and the members of the Squad. He listens and he treats everyone with empathy. It’s a known fact of my background that I studied to be a priest (one year, in my freshman year in high school, and my so-called “vocation” came from an overdose of Going My Way).  It’s possible that Craemer, to some extent, might be a projection of what I would have hoped I would be as a priest. Not entirely; Kim was a part of his make-up as well.

Craemer has sessions with several members of the Squad and its support staff; the session with Count Vertigo dealing with manic/depression comes to mind and I’ve heard from those in that community that it was a very accurate portrayal.

I so enjoyed Father Craemer that when he left the Squad I brought him over to The Spectre to be the spiritual advisor to the Wrath of God. Craemer never got the easy gigs.

All in all, I think Richard Craemer was a very successful character and there’s a reason for it. We thought the character through. Just don’t write the cliché. If that sounds obvious, well, a lot of basic writing rules are obvious.

So run out and get yourself a copy of the latest Suicide Squad collection. Get several. Give them out as gifts. People will thank you. And if they don’t, well… I do.