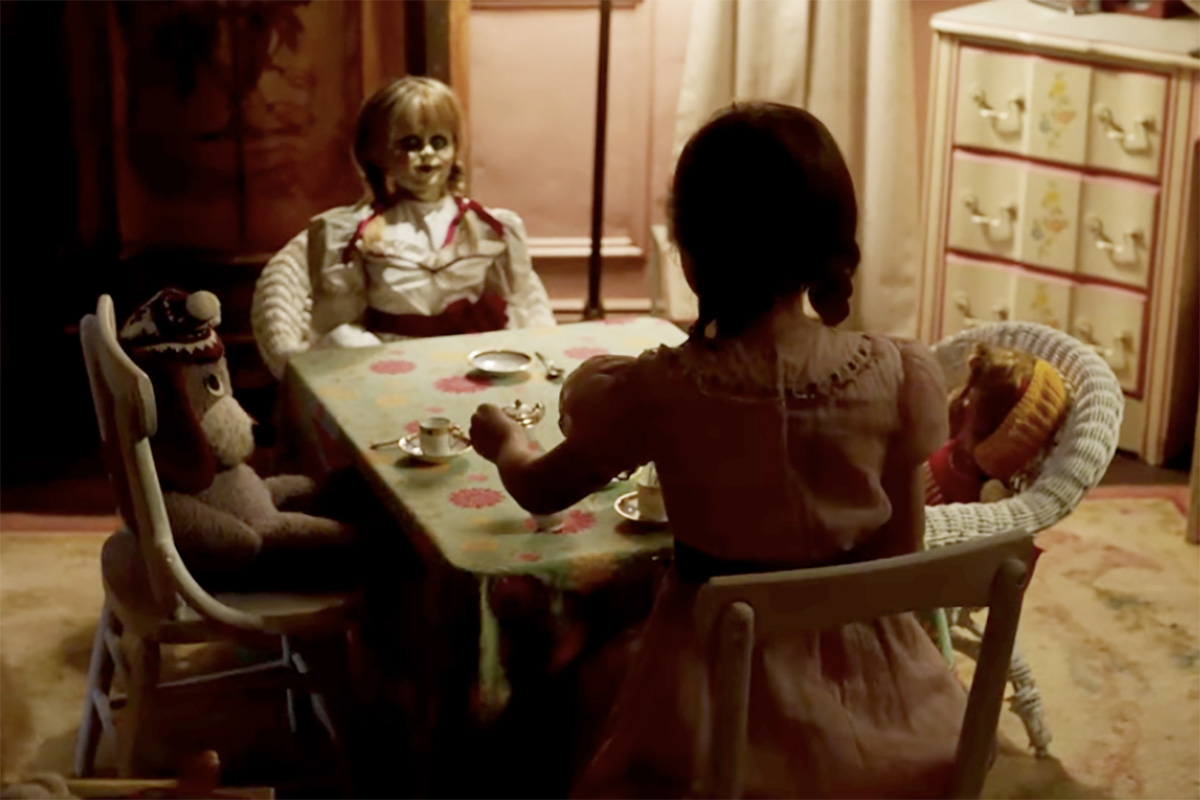 There’s a part of me that can’t help but admire the whole Conjuring franchise.  They have their main series movies directed by James Wan and starring Vera Farmiga and Patrick Wilson, huge stars for mid-budget horror movies, and then in the off-years they can make these spin-off movies like the Annabelle movies or the two forthcoming spin-offs from The Conjuring 2 and just harvest money from their big ideas using lower budgets and less-known talent.  It’s brilliant.  It doesn’t make for a particularly good movie in this case, but I can’t knock the hustle.

Annabelle: Creation is supposed to be a prequel to explain the origins of the haunted doll from The Conjuring.  Interestingly, three years ago they released Annabelle which was also an attempt to tell the origin of the same haunted doll and it started with the titular doll being a mundane non-evil object.  They have to go a long way to make this movie work with the second one and I’m not sure why you would bother as you have an infinite amount of time in the future where you could set this film.  Worse, they set up an even further prequel suggesting that the origin of the demon nun from The Conjuring 2 lies even further in the past.  At this rate we’re sure to have a movie about how a demon-possessed rodent pooped out the seed that grew the tree from which Annabelle would one day be carved.

It’s hard to say what Annabelle: Creation brings to the horror table that wasn’t already there.  It’s a movie about a young girl targeted for possession by a terrible demon and I feel like I’ve seen that story 100 times in the last five years.  It’s a group of orphans in a haunted house this time, that feels new.  It does pose a lot of questions like “if this guy didn’t want to be nice to kids why did he invite six of them to live in his house?” There’s a nun living with them so there’s a more present clerical authority figure but they do seem to have found a nun that does not care at all if small children are screaming in the middle of the night, maybe the ghost is deafening her or something.  Other than that it’s fairly standard fare, people getting haunted, other people not believing that it’s happening, sudden escalation when the movie realizes it’s running out of film.  Wash, rinse, repeat— but this kind of error is mostly bloodless, so you don’t even need to pretreat.

There’s a reasonable sized subplot about a haunted scarecrow that is so out of place in this movie I wonder if it’s an artifact from a movie that ended up being scrapped.  It doesn’t fit with the rest of the movie or the franchise and doesn’t even interact with any of the main characters.  It’s like they paid for the effects work and never made a full-length scarecrow movie and plugged it in here to fill the run time.  A substantial part of the third act is spent with a supporting character running away from a demon scarecrow and it’s a character that isn’t even likable.  I suppose I didn’t want to see anyone killed by evil farm equipment but this was a character who spend most of the previous 80 minutes making life difficult for a girl with polio and her friend.  The strangest part was there were characters I cared much more about who were dealt with quickly and off-screen to make room for this other stuff.  I bet a demon scarecrow could kill all sorts of people.  Or even that a demon with vast telekinetic powers wouldn’t need to inhabit a body made of straw to do work.

The effects are maddeningly inconsistent.  There’s some great work with creeping shadows and some character design with the demon.  There is also an entire sequence that’s supposed to be scary that I believe was just done with a person standing under a sheet.  Having an unmoving doll show up in a lot of places like a creepier version of Droopy is somehow less impressive in a modern horror movie than it was in a 1940s cartoon.  The movie still gets scares in, but they’re more through atmosphere and score than through anything that feels innovative or fun.

It’s hard to come up with a context in which I would recommend anyone else see Annabelle: Creation.  Like, if you absolutely had to see a horror movie and it was the only one you had access to due to some combination of geographic circumstance and catastrophic internet outage it’s certainly a horror movie.  Or if you’re a Conjuring superfan and want to get all the references they’ll seed from this in to next year’s The Nun or whatever comes out after that.  Other than that it’s basically impossible.  You would have more fun with most of what you could drag up on Netflix or whatever comes out in a month, or just doing something else for two hours.

David Fincher is a fantastic director who has spent most of his career making movies I don’t particularly care for. Not because they’re bad but just because I’m not interested in the story he’s telling. I wasn’t interested in The Social Network, I had no patience for The Curious Case of Benjamin Button, and I never quite got swept in the madness for The Girl with the Dragon Tattoo. Panic Room was the last film that I was truly excited for and even then I waited for it to be on cable. I’m back in the fold in a big was now though, Gone Girl is an exceptional film and a worthy kick-off to awards season.