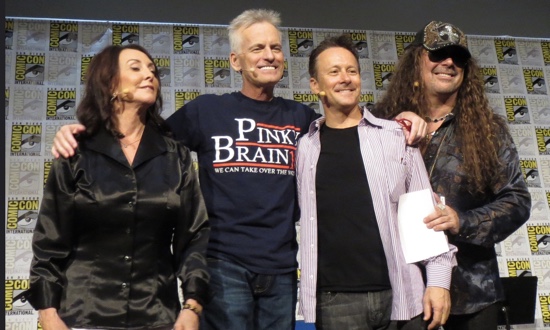 So I used to think the best way to wrap up a con was to find a nice, quiet, atmospheric bar with some awesome friends and partake of a tasty dessert and a refreshing alcoholic beverage. But I have now changed my mind! That is the second best way to finish out the convention experience. The first is to have your last panel of the con be the Animaniacs Live! panel; as I learned firsthand at SDCC 2016.

Anyone who knows me at all (or reads all of my columns, and obviously you should all be doing that!) knows I’m a huge fan of Animaniacs, and will probably never get tired of writing about the different facets of its awesomeness. I’ve also had the pleasure of interviewing several of its key talents – including Rob Paulsen (Yakko, Pinky), Maurice LaMarche (The Brain, Squit, Jess Harnell (Wakko), and most recently, Randy Rogel.

I was delighted to meet Randy, a multi-talented guy who wrote a majority of the songs we all know and love from Animaniacs, at Dragon Con last year, where he and Rob Paulsen did a “Music of Animaniacs” panel in which they sang Animaniacs songs live, with Randy accompanying on piano. And it was fan-tas-tic. The room was packed, the excitement of the fans in the audience was palpable, and the experience of being there in person while those two performed was a joy. Later, Rob announced via Twitter that there were definite plans to take this show on the road with the addition of Jess Harnell, Tress MacNeille, and an entire orchestra to back them. Needless to say, I immediately started hoping someone at, e.g., the Kennedy Center would see the wisdom of bringing them to DC.

I don’t know yet if that wish will come true; but in the interim, seeing Rob, Jess, Tress, and Randy perform the music of Animaniacs live at SDCC recently was incredible. And at the panel, they announced that Warner Bros. has gotten behind the idea of the live tour and turned it into an officially licensed WB thing – with tour dates to be announced soon here. (Kennedy Center, WB. Kennedy Center. I’m just saying.)

Wherever they end up, I know that I must see that if at all possible. And for anyone who hasn’t seen them live yet – if the tour comes anywhere near you, trust me, you want that experience. But if you’re like me and you just can’t wait that long for your next Animaniacs-related fix…well, I did in fact record the whole SDCC panel just for you!

So click and enjoy; and also don’t forget to check out my ever-growing SDCC 2016 photo collection, or my previous coverage of Nick Animation (including TMNT); American Gods; and Kings of Con.

And after that, Servo Lectio for even more SDCC recaps!