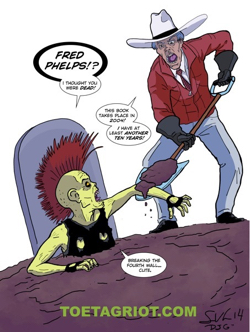 Now I loves me some catharsis. This past weekend I went down to New York’s lower east side to enjoy a David Bowie tribute night at The Delancey. They played the Cracked Actor documentary, had a cover band play a set exclusively from my favorite Bowie era – Station To Station through Scary Monsters And Super Creeps. It was a good time that I’m still reeling from.

With the impending conservative wave reaching its pinnacle in less than two weeks, I’ve been searching for other means to cope. Luckily I received my Kickstarter reward from backing the Black Mask Studios comic Toe Tag Riot the other day. That reward was the graphic novel collecting every bit of it including the shorts and, boy, could it have not come at a better time.

For those of you that don’t know, Toe Tag Riot is a four issue miniseries by writer Matt Miner and artist Sean Von Gorman. It’s the tale of a punk band in 2004 that gets a curse put on them that turns them into zombies every time they play. This causes the band, made up of singer Dickie Tagz, guitarist Paulie Propylene, bassist Annie Maul, and drummer Evie Vee, to have an unstoppable urge to devour human flesh that even band vegetarian Paulie can’t hold back. 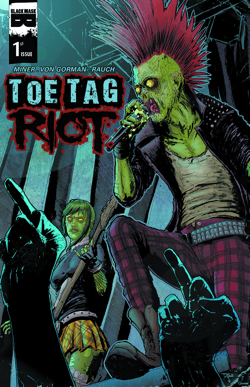 Instead of allowing themselves to give in to the evil of random killings to feed their zombie hunger, the band takes up an arguably more noble stance and only preys on bigots. I don’t want to ruin any surprises, but we get more rock star special appearances than just Fall Out Boy’s Andy Hurley and more bad guys than just Fred Phelps.

Now I know many of you wouldn’t condone the brutal massacres of groups like One Million Moms, The Westboro Baptist Church, or Neo Nazis, but Toe Tag Riot can sure be a good outlet for all that pent up aggression towards bigotry. Matt Miner’s writing on this project was heavily influenced by B horror movies and grindhouse style exploitation films and informs the characters.

Dickie Tagz is written as that kind of blissfully unaware “how homophobic he is in 2004 type” guy who grows as the story progresses. Annie and Evie are written as two kickass lesbian lovers that are very aggressive and in your face about it all which harkens back to those exploitation films. And the language throughout the book is very unforgiving and includes characters using queer slurs. Those characters are the bad guys though as they’re getting killed and/or eaten by our zombie protagonists, so you have to keep those things in perspective. 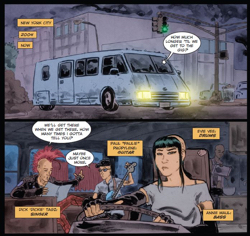 Sean Von Gorman’s art with watercolor coloring by Savanna Ganucheau give the book an almost cartoonish feel at times that really blends nicely with that grindhouse tone. It helps take some moments that could have been taken more seriously like in some of Matt Miner’s other work and gives it a comedic tone that really makes you feel like you’re watching the best kind of B movie and I really appreciate this book for that reason. I’d also like to take this time to say how Sean is a favorite artist of mine and I’ve gotten enough commissioned pieces from him to open up a small gallery. You can follow in my footsteps and start your Sean Von Gorman art gallery by visiting his website.

That being said, you do have to be in the right mindset to jump into this comic. If you’re in the wrong state of mind you could wind up getting offended despite the liberal leanings of the creative team. And if some language and certain kinds of representation may offend you, which I understand, you may have qualms with this book. Otherwise, you should really pick this up. Revel in bigots getting eaten by punk zombies, because after January 20th, this kind of catharsis it might be one of the only things we have to get us through what’s coming.