Manga Friday: Romance Is in the Air

Manga Friday continues to go backwards and forwards at the same time; this week, I read the first volumes of two very popular and long-running series, and the latest volume of Path of the Assassin

, a lesser-known samurai series from the creators of Lone Wolf & Cub

. Our theme this week is young love…but this is manga, so we’re talking about lots of panty-shots, blood spewing out of noses, gigantic sweat-drops, tasteful nudity, and utterly gormless young men. So let’s dive right in:

, I’m informed by its foreword, is a romance comic for young men. (They don’t put it quite that way, of course, but that’s what it is. And it shows just how big the Japanese marketplace for comics is when even the odd niche of a love story in a boy’s magazine is filled.) Kaoru, a young student, ran away from his terribly rich, terribly powerful, terribly conservative, and terribly controlling family some years ago, and is now in college. Aoi, his incredibly sheltered childhood sweetheart – who is the scion of a similar family, and who was betrothed to him at a very young age – runs away to find him, since she’s utterly in love with this man she hasn’t seen in a decade (or at all as an adult). They meet cute, she goes home with him – not like that, get your minds out of the gutter – and then the engine of plot complication starts to chug along.

Kou Fumizuki, who created this series, does make Aoi believable, which is not an easy achievement – she’s confused about nearly everything to do with Kaoru and modern life, and that’s the main driving factor of the plot. Kaoru is more generic, the usual audience-identification character (smart enough but not too smart, hardworking ditto, and so on), but he works, and centers the story reasonably well. I suspect that over-controlling rich families and arranged marriages are mostly things a generation or two in the past for the Japanese public, which makes them fodder for melodrama and comedy. (If they were still living institutions, stories about them would be drama.)

END_OF_DOCUMENT_TOKEN_TO_BE_REPLACED

Only two books for Manga Friday this week; the deadline crept up on me and found me with a smaller “read” pile than I expected. But they’re both pretty good, and both are brand-new, which may make up for it.

First is Alice on Deadlines

And, on the other side, Alice is a voluptuous young woman — presumably in high school. She’s terribly normal and average, except for being gorgeous (and it looks like all the other students of her all-girls school are also gorgeous).

Due to a mix-up, Lapan ends up in Alice’s body instead of the skeleton he was supposed to inhabit. And Alice is bounced into the skeleton. Wacky hijinks ensue, mostly involving Lapan-in-Alice’s-body trying to find a quiet place to fondle himself, and falling all over the other students. Along the way, the two of them do manage to take care of a few shishibitos (souls that cling to life instead of moving on, and which sometimes manifest magical abilities).

END_OF_DOCUMENT_TOKEN_TO_BE_REPLACED

Counting the cars on the New Jersey Turnpike

Well, maybe not the NJ Turnpike, but it seemed like every car in the world was in the Garden State Parkway heading southward both yesterday and today.  Kinda fun if one’s travelling northward, but not at all amusing when one is among the plastic and metal hordes.  It’s nice to come home to one’s own bed, one’s own computer desk, and one’s own ComicMix colleagues; here’s what we all cooked up for you this past week:

Had I only the foresight, Mellifluous Mike Raub could have entertained me in that horrid traffic with his latest Big ComicMix Broadcasts:

Of course our newest addition, Andrew Wheeler, has been cranking ’em out day in and day out, hope you’ve been keeping up! In addition, Robert Greenberger‘s had some crack analyses, Matt Raub‘s been reviewing everything in sight, and even Glenn Hauman made another columnar appearance this past week with Above and Beyond #3: Who made comics piracy big?.  Plenty of cool reads during these hot times! 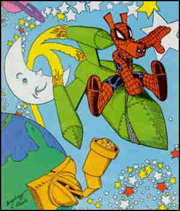 Ouch ouch ouch. A brutal recap of the film. Examples:

A huge crane swings around, very specifically knocking some floors out of the building where Gwen Stacey has a modeling job. She ends up hanging from something way up high. Down on the ground, Captain Stacey meets up with Eddie Brock, who is photographing the whole thing.

EDDIE: Hey, isn’t that your daughter in deadly danger?

EDDIE: Shouldn’t you be doing something?

CAPTAIN: Nah, these days we more or less just wait for Spider-Man. This is the best job ever!

EDDIE: By the way, I’m dating Gwen for some reason, although I too don’t seem especially concerned. Let me take pictures.

Spider-Man arrives and saves the day, despite nearly being thwarted by some errant CGI.

This, along with a brief discussion of ECMLS, is worth a read.