The Brontes: Infernal Angria by Craig Hurd-McKenney and Rick Geary 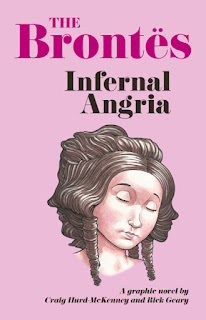 In our timeline, the Bronte siblings created several fictional worlds — they started with Glass Town, which grew (mostly from Charlotte and Branwell) into the somewhat separate Angria, while younger siblings Emily and Anne invented the entirely separate land of Gondal. All of those were explicitly set in odd, “exotic” corners of the real world they were familiar with, and peopled with various lords and adventurers and such. And, of course, the three sisters all published novels set in the real England of their day, all beginning with debuts in 1847.

The Brontes: Infernal Angria simplifies this, as fiction often does. There is one land: Angria. It is real, somewhere other than Earth, and accessed, wainscot-style, from the playroom of their childhood house in Haworth. Time works differently there; visitors from England can enter Angria, have any number of adventures, and return at the moment they left…but time can also pass in Angria between visits. (If the reader suspects this is entirely for storytelling convenience, he can hardly be blamed.)

Craig Hurd-Kenney makes the origin of Angria specifically in the children’s isolation and grief, starting in 1825 when their two older sisters, Maria and Elizabeth, died. (And a few years after their mother also died.) But he actually begins this graphic novel with a prologue set in 1861, years after all four of the younger Bronte siblings were dead, in which Charlotte’s widower attends the death of her father, Patrick, and then destroys all references to Angria in the house. This seems to be setting up a later conflict, but it really doesn’t pay off in the current version of Infernal Angria — I suspect Hurd-McKenney originally had a much longer, more dramatic story in mind, and the current 90-page version is what he and artist Rick Geary were able to actually get done in the twenty-ish years they were working on it.

So Infernal Angria is one part secret history — this is what the Bronte children were really up to — and one part unfinished drama. We see the Brontes enter Angria and have adventures and interactions there, but it’s all fairly thin and quick and melodramatic, as one might expect of plot points based on the stories told by a bunch of nineteen century pre-teens — it’s almost a distraction to the real concerns, back in England, which center on whether going to Angria at all is a good thing. The core tension is between the nature of Angria, that time-stopping power which is health-reviving for English travelers, and their father’s religion. Hurd-McKenney is not always clear why these things should be in tension, unless he’s implying Angria is an alternative afterlife. (My understanding is that the Brontes’ fictional worlds were not pagan, so they should be as close to their god in Angria as in England. Hurd-McKinney, or his characters, seem to have different ideas but don’t quite make them clear.)

I think this is Hurd-McKenney trying to construct a plausible secret history based on real history, and not quite succeeding, to my mind. It’s also possible that the original conception of a longer, fuller story would have had more room to make that conflict clearer and stronger. But, as it is, it feel like the Brontes, as they each sicken and get near death in turn, make random choices about who they feel about Angria and Heaven without quite saying what those choices are and what the stakes are.

So I can’t find Infernal Angria entirely successful. It’s interesting, and knotty, and a thoughtful weaving of secret history. but everything didn’t quite come together the way I would have liked. I should admit that I came to it as a fan of Rick Geary, the artist, rather than as a Bronte scholar or knowing anything about Hurd-McKenney — so the fact that I think the pictures are more successful than the framework they support might just be what was to be expected. Either way, it’s quirky and specific: fans of the Brontes, of secret history, of 19th century literature in general, and of vague religious conflicts will find things of interest here.

(Note: this book is not available from the usual hegemonic Internet retailer, nor from B&N or IndieBound — finding it might be a problem. ISBN is 9781532386244, if you want to do some searching.)