Frankenstein Jr. and the Impossibles

Hanna-Barbera ruled Saturday morning television in the 1960s, cannily finding trends and adapting them to their pint-sized audience. Working in tandem with CBS Saturday morning chief Fred Silverman, they spotted a fad and capitalized on it. As the lids were galvanized by the super-hero trend which led to ABC’s surprise smash success with Batman in January 1966, it is little surprise that the fall 1966 cartoon season was festooned with colorful heroic figures. Among the dozen new series to debut that September there was Filmation’s earliest offerings: The Lone Ranger and The New Adventures of Superman, plus H-B’s Space Ghost and Dino Boy, The Super Six, and, notably, Frankenstein Jr. and The Impossibles. The latter series was split evenly between the two properties, each offering something for its viewers. The former show was about boy genius Buzz Conray (Dick Beals), who constructed the thirty-foot tall robot improbably dubbed Frankenstein Jr. Buzz’s scientist dad (John Stephenson) was perfectly okay with the pair heading out to tackle the colorfully-clad criminals that plagued Civic City with regularity.

The second half was an odd blend of rock & roll, secret agents, and super-heroics, the three leading fads of the decade. The Impossible were Multi Man, Fluid Man, and Coil Man (Don Messick, Paul Frees, Hall Smith), secret agents posing as rock stars to disguise their heroic deeds. Regardless of venue, their performances were invariably interrupted by an even more rainbow-hued assortment of evil-doers. The bubblegum music and pop art color scheme were indicative of the pop culture that was filtering down to the kids.

Until recently, fans could only enjoy a sampling on Warner Home Video’s 1960s cartoon collection but now, all eighteen episodes have now been collected by their Warner Archive division. For those of us who love tripping down memory lane, rewatching these episodes is an instant reminder of what it was like crowding around the television, surrounded by cereal bowls and siblings, to watch the silliness unfold.

Of course, when you’re eight, as I was, this was serious entertainment. The show was never one of my all-time favorites but seeing these again, I’m reminded of the goofy fun. The “Frankie” stories are incredibly formulaic and the villains are more dumb than evil. It’s also hard to take foes with names like Junk Man, the Mad Inventor, Mister Menace, or Dr. Hook (without the Medicine Show) very seriously.

Still things moved along at a clip and with a sparkle of youthful enthusiasm, especially as Buzz shouted “Allakazoom” as they launched into the sky.

The pop trio was given their assignments from Big D, via a mini-screen embedded in the guitar, and then they shouted a rousing “Rally-ho!” and donned their outfits. They took on similarly silly threats from the Fiendish Fiddler, the Terrible Twister or the Diabolic Dauber.

At the time, my untrained ears had yet to recognize the limited voice cast that H-B tended to use on all their shows. Now, though, Ted Cassidy, Messick, Frees, and the uncredited Paul Winchell come through clearly.

Interestingly, this relatively tame series was one of the first to be attacked at being too violent for children, which is one reason it was canceled after running on CBS for two seasons. Uncut, though, it was resurrected on NBC a decade later, running from November 1976 until September 1977. It’s certainly one reason the 1960s collection ran a warning the cartoons were “intended for the Adult Collector and is Not Suitable for Children”. Thankfully no such warning appears here.

There is no restoration nor are there any extras, but the quality is good enough for those of us wishing to relive our youth in high-definition. 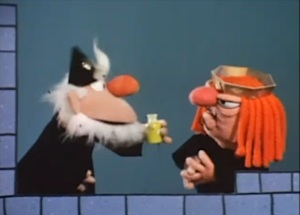 In a few days (January 4th to be exact), ABC lauches the second season of V with a lot of new cast members and a few surprises as well. Cast member Laura Vandervoort talks about what we can expect in the next run, plus a bit on the future of her role as Supergirl. Plus a bad week(month?) for poor ol’ Spider-Man. 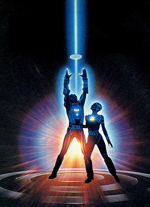 The Point Radio: Julie Benz On Being A Super Heroine

We begin our look at the new ABC super hero series, NO ORDINARY FAMILY,  by talking with JULIE BENZ – straight from being a victim on DEXTER to a much more powerful role here. Plus Ryan Reynolds lands in R.I.P.D. and a quiet weekend at the box office. 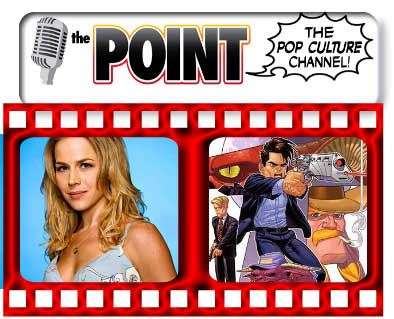 Kryptonsite reports that ABC has made the pilot of No Ordinary Family available online and legally over a month before its September 28 premiere… but only if you’re one of the first 50,000 people.

Visit NoOrdinaryScreening.com and put in the password “Extraordinary.” (Please note that this is case-sensitive.) There, ABC is screening the pilot with limited interruption.

This password/screening apparently has a tie-in to Best Buy stores, and was originally discovered by the Stitch Kingdom website.

Because this is apparently limited to 50,000 viewers, we cannot guarantee how long this password will work. Please remember that the Extraordinary password is case-sensitive.

Jane Badler, who played Diana on the original V series is joining the cast of ABC’s present series V as a recurring guest star. Badler’s character Diana is the mother of Anna (Morena Baccarin) who is the new leader of the Vs. Badler’s role begins during the season two premiere.

Courtesy of ABC, here’s a first look from the  original, brand new 12-minute Lost
chapter called “New Man In Charge” which offers a look at what Hurley (Jorge
Garcia) and Ben (Michael Emerson) do as the new Island overseers.

Oprah Winfrey To Be Replaced By Howard Beale 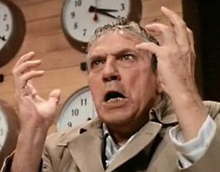 Next year, life as we know it will end. Oprah Winfrey will be ending her successful show.

Oprah’s program grew out of her stint as host of A.M. Chicago. The local program was so successful that after two and one-half years it went national to the other ABC-owned stations, and to general syndication. Now that Oprah’s sailing off
into the fog, her host station WLS-DT has decided what to do with the valuable time slot between Good Morning America and The View. They’re going to do a live, local morning news show.

No big deal, right? Lots of teevee stations have news shows following the endless network morning “news” show. But this one has a difference. This one has a live audience.

Just like Howard Beale, central character of the movie Network.

Like all of the better news shows, this new thing will be “local and fun,” according to WLS president and general manager Emily Barr.
“This will be another opportunity for us to do something terrific.”

Well, good luck with that. Personally, I loved Network and, with guys like Glenn Beck and Bill O’Reilly dominating the airwaves, the expansion of “unreality teevee” appears to be unstoppable.

‘FlashForward’ fans take cancellation lying down, and want you lying down too

Fans of ABC’s cancelled drama FlashForward are planning to stage protests at ABC’s offices in New York, Los Angeles, Chicago, Detroit and Atlanta this Thursday. Flashmobs (sorry) will lie down on the ground in front of the various ABC offices for two minutes and 17 seconds, in honor of the blackouts that happen in the plot of the show.

Now, if any of the fans report seeing anything in the future, we could have something here…

Additionally, fans shipped 20,000 friendship bracelets to ABC
Entertainment Chairman Steve McPherson, similar to the one Joseph
Fiennes’ character, Mark Benford, was given by
his daughter on the series.

For more information, go to http://www.preventtheblackout.com/.