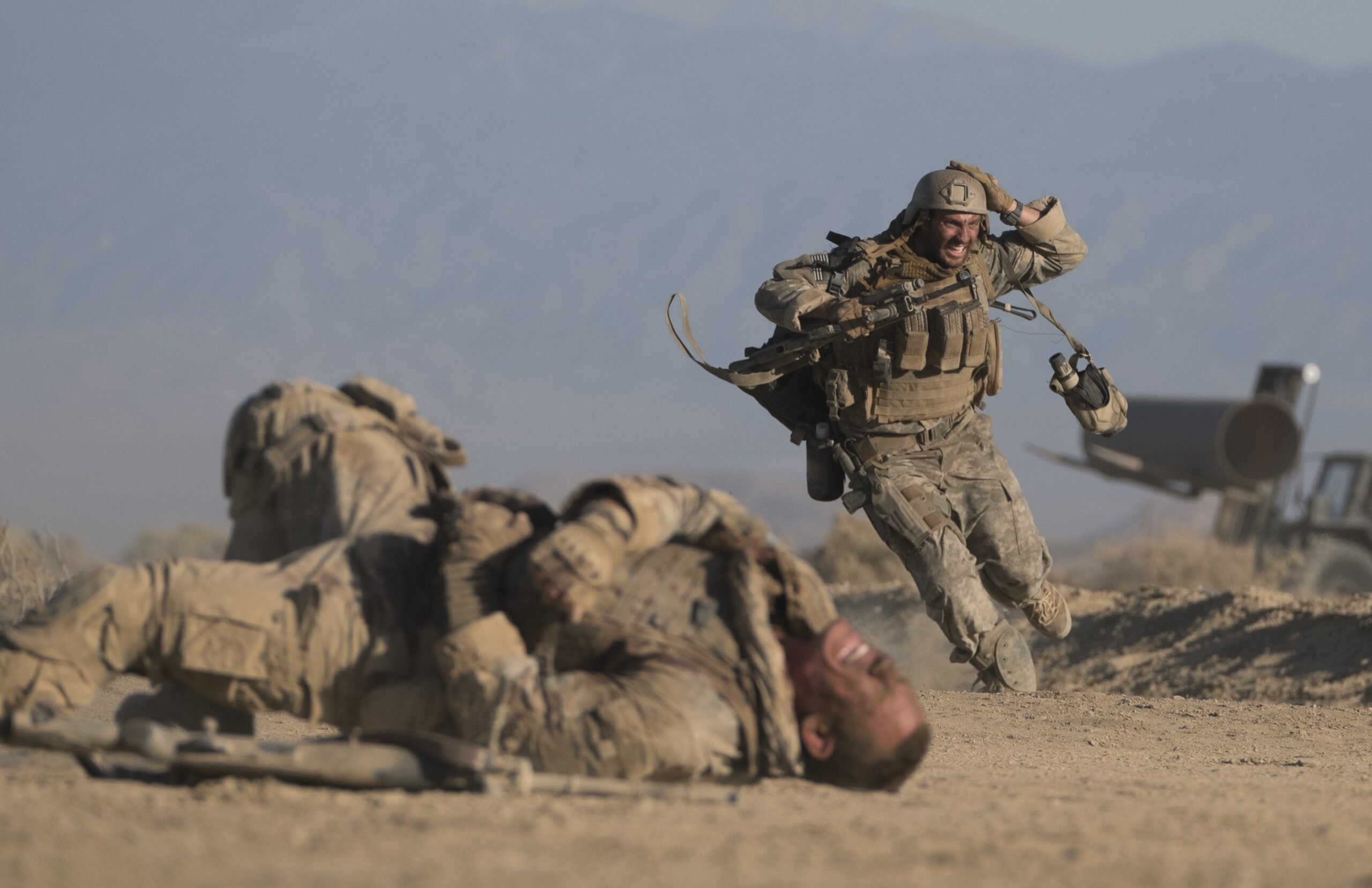 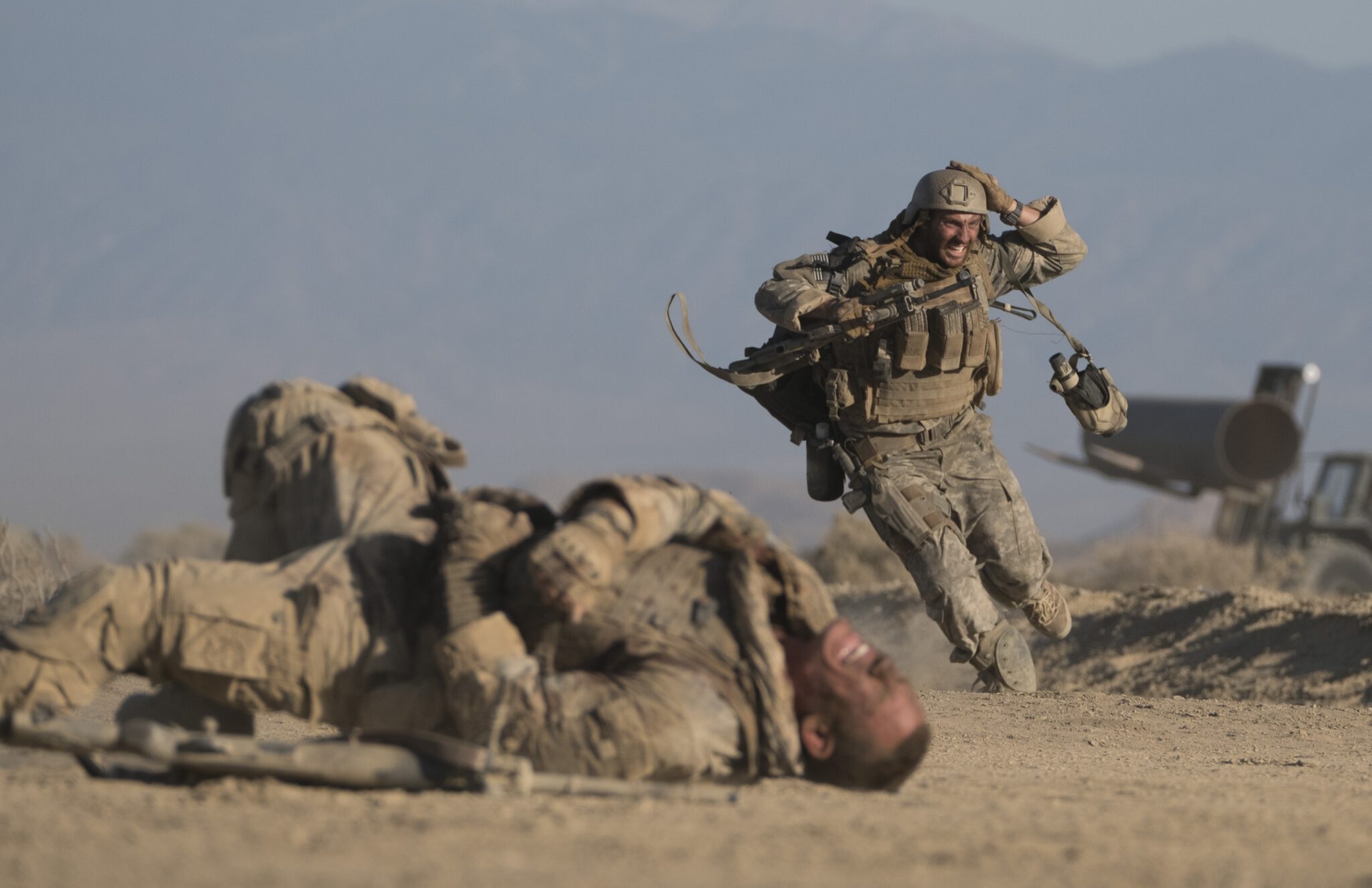 I’m not sure what it would take for me to get solidly behind a war movie these days.  There’s certainly a fatigue component from the unending wars we seem to be fighting in real life, full of drama and heartbreak in their own kind.  It’s also very hard to get anything new out of the genre right now.  Perhaps because so many fantastic directors have made big important war movies, or maybe just because we seem to get three to five every year.  I would need either a fantastic take on the themes I’ve seen a thousand times (and I think you’re about to fall well short of that with Dunkirk, Christopher Nolan) or some fantastic new way of telling a story in the backdrop.  The Wall is an attempt at doing the latter; this is a horror/thriller movie set in the Iraqi desert, but it isn’t a good enough movie to get over my general distaste for the genre.

The Wall is not a complicated movie.  Two soldiers are in the Iraqi desert to investigate an attack and are ambushed by a sniper.  Staff Sergeant Shane Matthews (John Cena) is hit first and is incapacitated, and Sergeant Allen Isaac is shot in the leg and is trapped behind the eponymous wall.  The rest of the movie is mostly Sergeant Isaac talking to his assailant (Laith Nakli) over short-range radio while he devises numerous plans to stay alive, identify and locate his attacker, and try to escape.  It’s not the strongest plot in the world, but it’s only an 81 minute movie and it’s more than enough to make that time feel full.  It hits the necessary action beats, it has some unsatisfying twists which I’ll come back to, and it does what it can to find catharsis.

What the movie is missing is a coherent thesis statement.  For a short film it does an awful lot of bouncing around.  There’s a fair amount of assuring the audience that war is hell, but there’s not a person alive that hasn’t heard that a thousand times by now.  There’s a lot of dialogue about who is really the terrorist, the insurgent fighter or the invading army, but they undercut it pretty dramatically with the way in which the Iraqi sniper threatens to gouge out Isaac’s eyes or staple his tongue to his chest.  Ideology aside, I’m not looking to even entertain the idea of rooting for someone that wants to do that so there’s no incentive to look at both sides.  There’s a desperate last minute attempt on the part of the movie to perhaps assert that this was a movie about the way people deal with guilt and grief.  I could entertain that idea if it weren’t introduced in the last ten minutes of the film, that’s a little late to be telling me what the movie is actually about and seems more like a last ditch effort to seem important.

This isn’t a story that needed to be set in the Iraq War.  You could have set this in a city with only a couple changes.  It could be in the distant future or an awful lot of the earth’s past.  I kind of want to know why they decided to make it a movie about a modern war.  One of the twists late in the movie (and this is a spoiler and this is your spoiler warning and I hope you’ve stopped reading by now if this bothers you) is that the Iraqi sniper is using the information he gets from talking to Isaac to fake a distress call to command and he plans to ambush the rescue team, and he probably did the same to get Isaac and Matthews out here to begin with.  It turns the sniper from a troubled person who claims to feel forced by the circumstance of the war into a cold blooded serial killer in a snap.  It bucks the trend of the last 40 or so years of war movies, and instead of showing the adversaries as people fighting for country this man is undeniably evil and is killing for sport or pleasure.  If the whole movie were set up like this it would be one thing, but as a last minute reveal it works to dehumanize the enemy in a war we aren’t even fighting anymore.  It left me cold, I didn’t like it.

That said, I don’t think I was supposed to like it.  I’m not entirely confident who The Wall is made for but it isn’t me.  It’s violent and graphic in ways I’m not interested in seeing.  It’s a gritty war movie and I don’t need any more gritty war movies;  it’s not interested in deep or meaningful characters as it is in manipulative drama and shock moments.  It isn’t a movie for me, but it’s probably a movie for some.  There were two teenagers sitting behind me who seemed really into it.  They’ve probably seen a lot fewer war movies than I have.  Ironically, this movie about people who use fantastically precise weapons is a dull, blunt, instrument.