Announcing a New Monthly Feature From The Tweeks 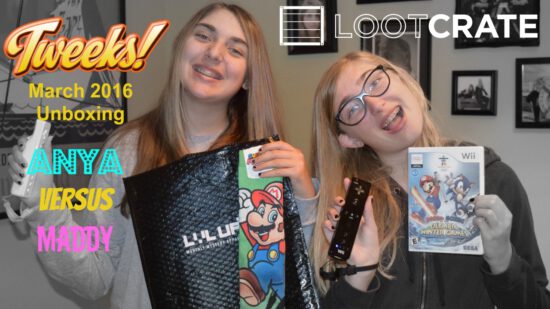 Debuting on March 27th, ComicMix’s resident twin teen geeks The Tweeks will be bringing us a new monthly feature! Maddy and Anya will present their LootCrate LVL Up+ unboxing.

But the fun doesn’t stop there! Quite appropriately, the March LootCrate theme is “Versus.” Since there is only one of each LootCrate goodie but two geeky girls, it means they’ll be battling it out for each cool item each month! No, we aren’t encouraging sister on sister violence, they’ll compete in a different geeky ways for the awesome swag.

That’s where you come in dear ComicMix Reader! We are going to need suggestions for feats of geek!

Is there a game you want to see them play to decide who gets the coolness? Let us know!

Got a pop culture trivia question for the twins? Email it to me at Adriane@comicmix.com

We took a road trip up to San Jose last weekend to check out the first ever Silicon Valley Comic Con. This was Steve Wozniak (of Apple fame) & Stan Lee’s venture. As we should have guessed by the location alone, this wasn’t the kind of con we’re used to. It was nerd on nerd (tech meets comics) and way more male-centric than the cons we usually go to. There were some great guests though like Nathan Fillion, Jeremy Renner, William Shatner, and a Back To The Future reunion. Watch the video to see how it all went down.

Also, interesting to note, there were far fewer Deadpools (our count was barely in the double digits) and instead Marty McFly & Spider Man cosplay were every where we turned. And also we only saw one Spider Gwen, but tons of girls wearing Spider Man and Spider-Woman costumes. This says something about SoCal vs. NorCal, we just don’t know what.

We love cat videos, superheroes, and comics, so when we met Rob Worley at Long Beach Comic Expo and he introduced us to his Eisner Award-Nominated adventures of a cat named Scratch how could we not pick up both Volumes 1 & 2?

So, Scratch is a cat who hates baths, but loves his human, Penelope. He’s your basic ordinary house kitty until he’s kidnapped by a mad scientist (whose name you’ll see Anya has problems pronouncing) and ends up with the ability to team up with any of his nine previous lives when he gets caught in sticky situations.

In Volume 1, The Pet Project & Cat Tails, you get to meet Scratch and his friends, but in Volume 2, Cat of Nine Worlds, things get crazy when a new cat, time travel and 9 magic stones that when brought together give ultimate power are brought into the picture.

This is a great series for kids (Anya says ages 4 – 12, while Maddy thinks this is all-ages fun — especially for cat lovers). Watch our video review for the deets!

Target to check out the new DC Superhero Girls dolls and the new Black Widow doll (action figure, if you wish) from Marvel.  Maddy also explores the choice of geek socks made for women that somehow forgot to include women.

Back when we first saw the IndieGoGo campaign on ComicMix for Hullabaloo we were freaking out. A Steampunk animated girl superhero in the hand-drawn 2D Disney style…sign us up! So, imagine our happiness when we happened to run into Hullabaloo creator James Lopez at Long Beach Comic Expo.

Well, first we had to buy all sorts of awesome art from his table, but then we got down to business asking all of our questions about the collection of 4 short animated films that will soon (but not soon enough) be on the festival circuit and on DVD.

What we didn’t know is that James Lopez has for a long time been one of our favorite Disney animators. He was the animator for Timon in The Lion King and the farm animals in Maddy’s favorite movie — Home On The Range (store that away for Tweeks trivia later on). He’s also worked on Pocahontas, The Princess and the Frog, Hercules, The Emperor’s New Groove, and The Bee Movie. Oh and he won an Oscar too. No big, right?!

For those of you who weren’t immediately sold on “Steampunk” and “hand-drawn animation” this is a story about Veronica Daring — a girl scientist who returns home from an elite finishing school to find that she needs to rescue her inventor dad who has gone missing. Veronica meets up with another girl inventor named Jules who is going to help. Two girls with mad STEM skills & cool clothes & gadgets. OMG! Seriously. OMG!

So, watch our interview with Mr. Lopez and then count the days until we can actually watch this awesomeness. You can find our more info at hullabaloo-movie.com.

(And if you are even a smidge excited, Maddy would like to recommend The Finishing School series by Gail Carriger which is like Steampunk girls meets a Hogwarts for Spies).

We spent last weekend at the 6th annual Long Beach Comic Expo. Basically we shopped and counted Deadpool costumes, but we also interviewed some comic creators and went to some panels too. Here are some of our highlights, so you can feel like you were there too. We’ll be back next week with some interviews.

Oh, and our final Deadpool count was 68. Maddy won.

This week McCall’s introduced three new patterns in their Cosplay by McCall’s series. Did you even know they had a series for Cosplayers? Well, they do. It’s been around since last fall – and it was developed after talking to actual cosplayers about their needs, wants, etc. Yaya Han even has her own line. Priced from $17.95 to $19.95 (with some really great sales going on now for much much less), the patterns can be reused for different cosplays and seem pretty easy with their step by step instructions and larger outer envelopes full of additional info, sewing tips, line drawings and photo references. There’s also a blog with more ideas on the cosplay.mccall.com site.

The new patterns are Flight, Trenched & Cloak X and in this episode, we give some suggestions of what we’d make with them, plus what patterns we love from the other cosplay collections on the site. There’s so many cool patterns. that we could totally costume ourselves for all of our fandoms from Supernatural to Avengers, from Jane Austen to Hamilton, from Disney Princesses to Anime cats! Only problems is the actual sewing part…which actually doesn’t look like it would be impossible….when we figure out our sewing machine.

To celebrate how exciting we were to hear that James Corden will be hosting our Super Bowl, The Tonys (June 12th on CBS), we are counting down the top 10 reasons why we adore him!

Back in the day….back before we were born even!…there was this much loved cartoon on Nickelodeon called Invader Zim. But check this out the powers that be at Oni Press have brought it back. And last weekend Volume 1 of the comic series was released! It was written by Jhonen Vasques & Eric Trueheart with artists Aaron Alexovich and Megan Lawton with Simon Troussellier and Rikki Simons.

Would be spoilers to say that we love it and now we not only want to watch the TV series, but we’d like new episodes as well?

The comics follow where the cartoon series left off. It’s about boy named Dib who knows that Zim is really an alien who wants to destroy the world, except no one believes him. It’s rated for teens, but we feel like these books would be loved by younger boys too. It would be loved by anyone who likes funny stories and fart jokes, actually. Watch the video and we’ll explain further.

Tweeks Go to Disneyland: Season of the Force, Marvel HQ & Inside Club 33

This week Maddy & Anya take you to Disneyland. They review Season of the Force (the Star Wars take over of Tomorrowland) and Marvel’s HQ. And then then you take you inside the very exclusive Club 33 in New Orleans Square.

Located in New Orleans Square, the private club has a “secret” entrance and as our mom likes to point out, it’s the only place within the park that sells alcohol. Named for either it’s address (33 Royal Street) or the 33 initial corporate Disneyland sponsors in 1966, Club 33 was built by Walt as a place for special guests, but he didn’t live long enough to see it. Club 33 membership requires lots of money (something like a $27,000 buy in with $12,000 a year in dues) & lots of time (we’ve heard it’s a 15 year waiting list), so we’re not members, unfortunately. This is definitely a must-do before you die, Disney fans!