Editor’s Note: This originally appeared at www.michaeldavisworld.com on January 28, 2011. It is being reprinted here without permission. It’s been reformatted to meet ComicMix’s high editorial standards. 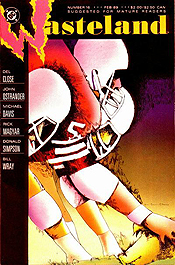 …Denys Cowan, Bill Sienkiewicz and I shared a studio next to some creators who are all legends now. It was the second silver age of comics and we were in the thick of it.

Howard Chaykin was doing American Flagg!, Walt Simonson was on Thor, Al Milgrom was doing Spider-Man. Jim Sherman was in the studio but I forgot what he was working on, I do remember it was bad ass.

The studio where all those superstar upstarts were was called Upstart Studio.

Also at Upstart was Frank Miller who was doing Daredevil and about to do Ronin. I seldom saw Frank but when I did more often than not he would ask what I was working on and was just a great guy. I remember being a bit jealous when Bill and Frank started working on Elektra and for the life of me I can’t remember why.

All that said, how’s that for a line up?

Those guys (Denys included) sounds like a comic fan’s dream team even now. Speaking of my best friend Denys a few years forward in time from our studios days would see him nominated for an Eisner for best penciler… twice. People forget just how badass Denys Cowan is.

Our studio never got an official name although Bill liked to call it Bill and his little helpers… the bastard.

As far as what we were doing at Bill and his little helpers Studio, Bill was working on Elektra and The New Mutants; Denys was doing The Black Panther for Marvel, V (the comic adaption of the original TV series) and Vigilante for DC.

What was I doing? Nothing great in comics, that’s for sure.

I was working on children books, movie posters, etc. I had one comic book assignment for the Marvel magazine Epic. The assignment was given to me by the late great Archie Goodwin. I made an appointment with Archie hoping for a cover assignment I never dreamt he would give me an interior job.

I loved comics but I was trained as an editorial and mainstream illustrator. I never learned to do comics like, say, a Denys Cowan who can imagine and draw anything from his head. I need reference, I need to look at stuff, and I need dozens of layouts before I start a finished piece. Comics that are fully painted and tell a non-liner story at that time were rare. I was always jealous (still am) of guys that can do that make it up from nothing jazz.

Dwayne McDuffie recently commented on multitalented guys that can write and draw. Truth be told Dwayne, just as a writer, is light years away from where I will ever be as a visual storyteller. That, to me, is multitalented. When Christopher Priest was the editor on the Spider-Man book he once dissected a cover painting I did for him like he was a high school science teacher and I was the frog. He’s also a hell of a writer and just as good a musician. Reggie Hudlin glides between producing and directing movies and TV shows to writing some of the best comics I’ve ever read. Those guys are multitalented.

20 or so years ago, except for Heavy Metal and a few other outlets, painted comics were few and far between. The graphic novel as a fully painted editorial piece of art and content was not quite there yet. It was about to come into its own lead by people like my brother from another mother Bill Sienkiewicz. The work of Kent Williams, George Pratt and Dave McKean was just around the corner as well but not there yet.

Howard Chaykin saw over 20 years ago where comics were going and produced a few painted books before just about anyone did.

Like an asshole, I tried to do comics the way Denys, Walt, Howard and Frank did. I was too stupid to listen to Howard Chaykin when he told me, “Do what you do, the industry is changing and you can bring something new to it.’

Some of the best advice I’ve ever been given. It’s right up there with, put your hands on the wheel and answer in a civil tone of voice, “Yes officer, whatever you say officer.”

I wish I was joking about the cop advice, but I assure you I’m not.

I did not listen to Howard. Years later Mike Gold told me the same thing after I delivered a Wasteland story, which was not my finest hour. I didn’t think he would but Mike gave me another Wasteland story and said, “Do this like any other illustration assignment.” The story was about South Africa and I nailed that mother.

Of all the high profile regular illustrations gigs I was doing (Newsweek, NBC, etc.) the assignment I was the most excited about was Epic. It was a six-page story I was writing and drawing and taking forever to do because I wanted to do it like “regular” comics artists did. Could not do it then, can’t do it now.

Long story short, I will never forget those late night talks with Howard, Bill, Frank, Jim, Al and Denys. It was indeed the second silver age but for me it will always be my golden age.

Bill and his little helpers. Somehow that does not brother me anymore.

Yeah, I know this is pretty damn sappy.