In short, it looks amazing, with some intense action and very slick animation. But don’t take my word for it, watch for yourself. 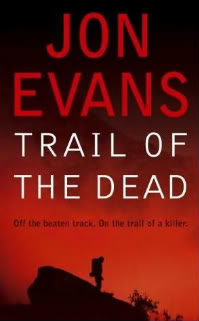 The list of novelists jumping into the graphic novel game continues to grow, and Vertigo is leading the recruiting effort. Jonathan Ames’ comics debut, The Alcoholic, is due out this fall from DC’s imprint, and now comes word that Jon Evans is scripting a Vertigo book titled The Executor.

Evans (also a well known journalist) writes about the transition from prose to comics in a Guardian blog, explaining how he finally entered into comics, which were once considered "a squalid literary ghetto."

But the prospect of experimenting with a whole new kind of storytelling, immediate and visceral, was exciting … And an idea that had nagged at me for years, but never seemed quite right for a novel, was perfect for a graphic one: The Executor, a tale of dark secrets and racial tensions in a small town by a Native American reservation. …

Authors are accustomed to being dictators, but comics are a terrible medium for control freaks. Artists know more about visual storytelling than most authors ever will, and tend to interpret even detailed scripts as suggestions, not commands. I couldn’t be happier with The Executor’s artist, Andrea Mutti, but a lot of negotiation and letting go of ego was required on both sides for the book to work.

Dreamworks to Adapt ‘The Damned’ 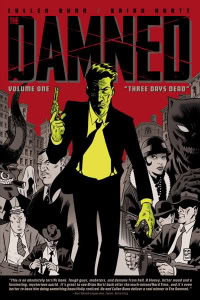 Oni Press just landed a new movie deal, with Dreamworks picking up the rights to the series The Damned.

The comic, created by Cullen Bunn and Brian Hurtt, is set in Los Angeles during Prohibition and follows a detective who stumbles onto some supernatural weirdness while investigating a case.

The past couple months have been a Hollywood boon for Oni, with things moving forward on Scott Pilgrim vs. The World (likely starring Michael Cera) and Ben Stiller picking up the option on the upcoming The Return of King Doug.

Things have also been pretty busy for screenwriter David DiGilio. He’s been signed up to adapt The Damned for Dreamworks, and he’s already adapting the movie version of his comic book series North Wind, published by BOOM! Studios. 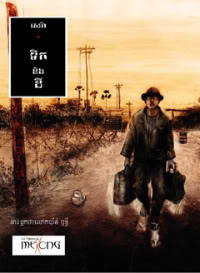 With comics being created throughout the world, it’s all too easy to overlook some of the medium’s best talents. The lack of recognition for Séra, the French-based cartoonist who’s created a collection of graphic novels sketching out tales of the Khmer Rouge.

Like Art Spiegelman and Marjane Satrapi, to name two, Séra looks back on the ugly history of his native land and weaves it into comic book stories (he’s created 12 books). Séra (real name Ing Phouséra) was born in Cambodia and fled for France in 1975, just as Pol Pot took control of the country.

A recent article on TIME magazine’s Web site, takes a look at this largely unknown creator:

Séra started his first graphic novel about Cambodia, Impasse et Rouge — chronicling the years just before the Khmer Rouge — in 1987, five years before Art Spiegelman’s Maus would win a Pulitzer for its famous depiction of the Holocaust and demonstrate that gravitas and the graphic arts were not mutually exclusive. Impasse et Rouge wasn’t published for almost another 12 years. Although the following two titles about Cambodia, L’Eau et la Terre (2005) and Lendemains de cendres (2007), were picked up in fairly quick succession by the major French comic publisher Delcourt, Séra has still not had the international success that "serious" comic books artists like Spiegelman, Daniel Clowes (Ghost World) and Marjane Satrapi (Persepolis) have enjoyed. He teaches drawing by day and works as a night porter at a Paris hotel to get by.

I’ve looked to see if any of his books have been translated to English, but I haven’t found any so far. 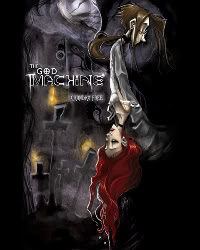 It’s a diverse bunch, and a sign of ASP’s growth after the success of Mouse Guard and English translation reprints of The Killer. One of the new titles is The God Machine (cover at right), which follows a young man as he tries to save the soul of his recently deceased girlfriend.

Co-publisher Aki Liao, [editor] Joe Illidge, [art director] Pauline Benney, and I have pored over some amazing submissions. And the crop of creators and titles we’ve selected we think not only fit the company’s focus and direction and mission, but will be greatly enjoyed by fans of ASP’s current titles and new readers who we’re sure will jump at these new books we’re so extremely proud to publish.

END_OF_DOCUMENT_TOKEN_TO_BE_REPLACED 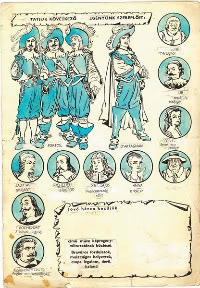 Here’s a story about a comic book with a plot more interesting than most comics. Pal Korcsmaros was a Hungarian illustrator, who lived during World War Two and its aftermath, when the USSR ruled easter Europe.

One of Korcsmaros’ endeavors was comic books, and particularly remaking classic tales, such as The Three Musketeers. According to a story at Agoravox, the Communist regime placed severe strictures on the content that could be produced, so many of Korcsmaros’ works were taken and sealed away.

Those manuscripts have recently been found (including the page seen here, via Agoravox). Korcsmaros’ grandson has taken possession of the manuscripts, though a painful legacy remains:

What makes this case special is that this not only reveals a personal tragedy and the loss of privacy in the Communist dictatorship, but also the infringement of other fundamental rights to property and copyright. The destruction of personal liberties went together with the destruction of the liberal arts and the forums of freedom. The author of these comic books was stripped from his property, and for 33 years the heirs of the intellectual properties were also stripped from their rights. Not to mention the readers in Hungary, who had to wait for a generation for the re-publication of this classic comic book, and the readers in Western Europe, who have lost the possibility to get a decent publication of Hungary’s eminent comic books maybe forever.

New Images from ‘The Spirit’ Revealed

IGN just posted some of the first images from the upcoming The Spirit movie. Judging from the photos, the movie stars (in order): Scarlett Johansson, Samuel L. Jackson, Frank Miller and a green screen. Exciting! Or not.

Here’s one of the images:

Honestly, it looks like Jackson was on his way to emcee the ESPYs and wandered onto the Sin City set. Nothing about this evokes the feel of Will Eisner’s The Spirit, but I suppose it’s too early to say for sure.

The Weekly Haul: Reviews for the Week of April 10

A good range of comics this week in style, but there wasn’t too much substance, and a surprising dearth of Skrulls, what with Skrullapalooza going on (Thanks for that one, Brian!) Still, some interesting books, so let’s discuss. 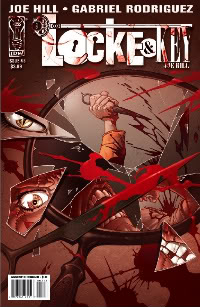 — In Hollywood, this century so far has been dominated by horror films, an endless line of creepy or violent flicks that closely imitate either The Ring

. It would be easy to look at a project like Locke & Key, which is published by horror house IDW and written by Stephen King’s son, and think it’s just another creative property hopping on the horror bandwagon.

Writer Joe Hill is crafting a very distinctive story, though, and one that’s made strong by the characters. In each issue so far, Hill has mostly featured one of the three children whose father was murdered by a teenage psychopath. This issue it’s the daughter, Kinsey, and the bulk of the story is a completely convincing look at how she struggles to fit in as "the girl whose dad got killed."

The little side moments then are used to further develop the supernatural mystery of the family’s home – Keyhouse – and to bring the villain back into the picture, as the murderous and insane Lesser makes his bloody escape from lockup. No surprise then that the series has already been optioned for a movie.

Nova #12 — This series is lightyears ahead of every other outerspace series right now, and every issue can be counted on for epic battle, a thoughtful plot and some cool interstellar weirdness. This time it’s Richard finally besting the Phalanx infection, only to end up in a too-big fight with a Technarc (a giant alien robot from Warlock’s family tree).

A special credit goes to the art team of Paul Letterier and Rick Magyar, who manage to make the robot aliens believable and expressive, no easy task. Now, if only the conclusion to this story was actually in this series, not Annihilation: Conquest.

— I have something of a painful secret to admit. I don’t read manga. I just can’t get into it, no matter what I try. I really hate to admit then that it took a manga version of Batman to hook me. But aside from some introductory pages that rehash Batman’s history (I’m assuming for readers who like manga and not Batman), Yoshinori Natsume’s American comics debut is a strong one.

The questions raised of Batman’s true identity (whether he’s Bruce Wayne or Batman) are nothing new, but the deeper story of Batman’s history in Japan and the mask-wearing, face-cutting-off villain are set up quite well in this first issue.

END_OF_DOCUMENT_TOKEN_TO_BE_REPLACED 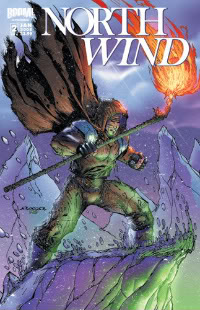 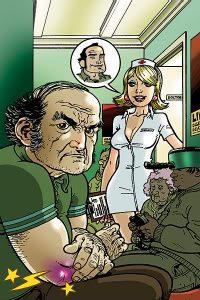 For several decades now, Harvey Pekar has existed in comic book form as a straight-talking, ill-tempered, hypochondriac who can’t go very long without finding something to complain about.

The latest edition of his American Splendor

strikes me as an important moment in that career, then, as Pekar is settling into a more mellow existence. In the first issue of this volume (the second from Vertigo), Pekar doesn’t call a pharmacy worker a Nazi (and benefits from the lack of anger) and doesn’t blow his top at a sycophantic fan who invades his life and doesn’t totally trash a critic who didn’t like his book Macedonia

One of the things that made Pekar something of a phenomenon in the first place was his always-simmering anger (let loose so famously on David Letterman’s couch), so these stories become interesting in two respects: watching Pekar’s personality change and seeing if his fans stay with him through that metamorphosis.

The eight stories collected here are otherwise a fairly typical mix for Pekar, little snippets of everyday life both mundane and striking, and always entertaining.

The two best are: a small moment with Pekar and Hollywood Bob, who makes a random comment that gives an abrupt and bizarre punctuation to a conversation, and a memory of a theater coworker’s painful relationship from Pekar’s teenage years. Though the art is good throughout, the pencil work by Zachary Baldus in the theater story is some of the best pencil art I’ve seen in comics in quite a long time.