Review: ‘Up’, Pixar and Storytelling 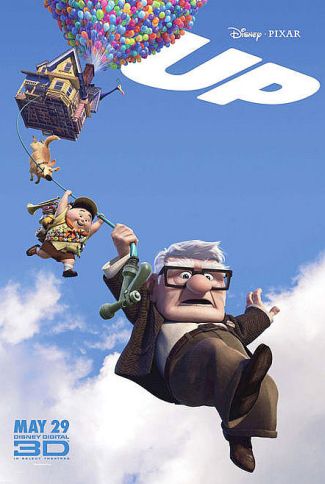 One of the things that I love about Pixar is that they
remember what a lot of filmmakers – and sadly, particularly those working in
the CG medium – have forgotten:

A film needs a story.

So many films today focus on technological dazzle, shock value, making pretty
pictures, or cleverness. None of these are bad things; any and all of them can
add enjoyment, but for me a good story is more important than anything else. I’ll
enjoy the spectacle, the beauty, the wit, but what stays with me is the story.
If story is absent, everything else fades quickly. Pixar’s films have had
consistently strong storytelling, letting the characters carry the viewer along
on their adventures, and this summer’s offering, [[[Up]]], is no exception.

Up doesn’t come near to matching the sheer dazzling brilliance of last
summer’s [[[Wall-E]]], but it is a sweet and charming movie in its own right,
and like Wall-E, it remembered to have a story.
Not only that, but Up takes a startling number of storytelling risks,
particularly for a movie aimed at children.

First there was the absolutely heartbreaking montage of Carl
and Ellie trying to save for their dream trip, and having their dream
constantly derailed by crisis after crisis, only to have Ellie fall ill and die
just as the trip was finally in their reach. This montage is also a rare
instance of a wedding being the beginning of a couple’s story rather than the
“happily ever after.” Seeing Carl lose the legal battle to stay in his home was
also painful.

END_OF_DOCUMENT_TOKEN_TO_BE_REPLACED

The Academy Awards are always a bit baffling in their nomination choices— who gets chosen, who gets overlooked— but the Best Costume category is a lot easier to predict. Historical dramas, unless they’ve really bollixed things up (think of the laughable attempts at historical garb in King Arthur or Robin Hood: Prince of Thieves), will invariably fill the nomination list.

This year we have Australia, a World War II epic; The Curious Case of Benjamin Button, in which Brad Pitt lives backwards from the early 20th century to the present day; The Duchess, set in 18th century England—I think everyone would have been shocked if this one hadn’t been nominated—Revolutionary Road, set in the 1950s; and…

…Milk. Okay, apparently the 1970s are now long ago enough that they qualify for a historical costume drama. I feel old. Then again, looking back at the 1970s, much of the fashion was as outlandish in its own way as panniers and three-foot powdered wigs, so I suppose it’s really not that much of a stretch.

Shamefully overlooked were any of the year’s many science fiction, fantasy, and comic-book related movies. In particular, it is shocking that Hellboy II: The Golden Army did not get a Best Costume nomination for its visual feast of elves, trolls, demons, and fish-creatures. The Makeup nomination hardly seems adequate. But then, this is nothing new; none of the Star Wars prequels received so much as a nomination for their incredibly detailed and inventive costumes.

Which leads to an interesting question: why does the Academy tend to nominate and honor movies whose costumes are based on history over movies whose costumes are entirely invented—created (pardon the expression) out of whole cloth, rather than copied from the history books? There are exceptions, of course; The Fellowship of the Ring was nominated, and The Return of the King was not only nominated but actually took home the award. Still, one would think that the creativity and imagination that goes into designing an original fantasy or science fiction costume would trump historical recreation. (Though having done both I can say that to do either one well requires a fair amount of skill.)

END_OF_DOCUMENT_TOKEN_TO_BE_REPLACED

The Fan’s Guide to the Oscars

The 2009 Oscar nominations are in, and they include a gratifying number of comic book adaptations and other geekly delights. First and most obvious is The Dark Knight. In addition to Heath Ledger’s highly anticipated posthumous Best Supporting Actor nod for his reinvention of the Joker, The Dark Knight has also gathered a slew of technical nominations: Best Art Direction, Best Cinematography, Best Sound Mixing and Sound Editing, Best Film Editing, and Best Visual Effects.

But the Batman isn’t the only comic hero to get Oscar’s nod. Iron Man was nominated for Best Sound Editing and Best Visual Effects (though sadly, Robert Downey Jr. received no recognition for his splendid portrayal of the eponymous douchebag hero. His nomination for Tropic Thunder is a small consolation, as comedies and comic roles get snubbed by the Academy almost as much as fantasy and science fiction.) Wanted, based on Mark Millar and J.G. Jones’ comic miniseries, was nominated for Best Sound Mixing. And Hellboy II: The Golden Army got a nod for Best Makeup. No nominations at all for The Incredible Hulk – thought I wouldn’t want to be the one breaking the news to Ed Norton.

You may notice a pattern here: except for Ledger’s Best Supporting Actor nomination, all the comic book movie nominations are for technical awards: music, sound, visual effects, makeup. And even those seem a bit skimpy – where is The Golden Army’s costume or visual effects nomination? Makeup alone does not begin to cover Guillermo del Toro’s stunning visual feast. It’s sad that in a year delivering so many knockout performances and stories from the comic book world, the Academy continues to marginalize them in favor of heavy real-world dramas.