‘Roots of the Swamp Thing’ Includes 3 by Nestor Redondo

Lost amidst DC Comics’ latest round of solicitations is a historic reprint collection of one of its seminal works: DC Comics Classics Library: Roots of the Swamp Thing. And it’s historic not because it represents the first hardback compilation of the material but because the story is being published in its entirety for the first time ever.

Upon her arrival at DC Comics in 1976, Jeanette Kahn made no secret of her disdain for the company’s sampler-style use of reprints in the years prior to her arrival. Instead, she wanted to see specific fan-favorite storylines compiled in a single volume or series. So 1977 saw the release of four key Ra’s al Ghul stories in the tabloid-sized Limited Collectors’ Edition #C-51 and the beginning of an irregularly-published set of one-shots called the Original Swamp Thing Saga (appearing in DC Special Series #2, 14, 17 and 20) that ultimately reprinted Len Wein and Bernie Wrightson’s Swamp Thing #1-10 from 1972-1974.

The years passed and collections of specific stories grew to become the industry standard, evolving from the newsprint of these formative examples to much nicer grades of paper and from the traditional pamphlet-type package to paperbacks and hardcovers. There was a tendency, however, to favorite the art over the scripts in many of these early (and not-so-early) collections.

When Steve Englehart’s landmark eight-part Batman opus from Detective Comics from 1977 was reprinted (first in 1985/1986 and again in 1999), the impact of his last chapter was blunted a bit by the fact that the Len Wein-scripted Clayface III follow-up was attached by virtue of the fact that it had also been penciled by Marshall Rogers. Conversely, Wein’s own run has only ever been reprinted up to Swamp Thing #10–because that’s the point when artist Bernie Wrightson left the book. Problem is, Len continued to write Swamp Thing for another three issues, ably abetted by artist Nestor Redondo. More significantly, he carried the themes from issue #1 (and specifically the tragic creature’s relationship to his pursuers Matt Cable and Abby Arcane) to a touching, satisfying conclusion in #13.

Unfortunately, the fan without access to the original issues has never read it. The first ten issues (along with the prototype story from House of Secrets #92) were gathered again on much nicer paper in 1986’s Roots of the Swamp Thing #1-5 before going the trade paperback route with Swamp Thing: Dark Genesis in 1992. And most recently in the digest-sized Secret of the Swamp Thing (2005). [Meantime, the pre-series short story from House of Secrets #92 is now one of the ten most-reprinted stories in DC’s history, with–to date–ten reprintings compared to Swamp Thing #1’s five.]

END_OF_DOCUMENT_TOKEN_TO_BE_REPLACED 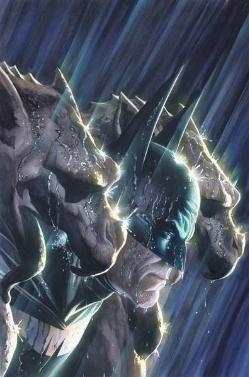 The nature of super-hero comics (and serial storytelling in TV as well) has become an incestuous thing, one that feeds on its own cast of characters, no matter how wrongheaded it might seem. In any given story arc, the reader (and the viewer) has been trained to expect The Last Person You’d Ever Expect (fill in the name of your favorite Beloved Supporting Character) to be revealed as the villainous mastermind. And/or salacious details about Our Hero. Dark secrets that threaten the very underpinnings of the lead characters’ being. The promise of certain death for players who’ve existed for decades. (No, really. We mean it!)

The pleasure in last week’s wrap-up to [[[Batman R.I.P.]]] was in the way Grant Morrison mocked all that. Consider yourself under a Spoiler Warning for the duration of this column.

At its best, the story was a love letter to Batman as he ought to be — prepared to a degree that anyone else would find ludicrous (as in a terrific flashback sequence) and uncompromising in the face of threats against the reputation of his family name. Watching him emerge from an inescapable deathtrap and wade through all comers was quite satisfying after months of questioning whether Batman had lost it.

Just as 1993-1994’s [[[Knightfall]]] arc gave us the ultra-violent Batman that a fringe of fandom imagined they wanted, R.I.P. delivered the story formula that readers have been conditioned to expect. And then, in the final act, Morrison pulled the rug out from under them. Think that the Black Glove was going to stand unmasked as Thomas Wayne, the father of Bruce who’d faked death and became a criminal mastermind? Lies. All lies. Waiting for the culmination of Batman’s mental breakdown? Didn’t happen (at least not to the degree it seemed). He was acting! (Thanks, Alfred!) And that caped-and-cowled, ready-for-slabbing corpse? No body.

I can’t help but think, too, that Morrison’s treatment of the Joker reflects a bit on the villain’s usage in the wider DC Comics line. In Morrison’s first issue (#655), the character was casually defeated by a nut in a Batman costume who shot him in the face. And in this climax, his fate was even more dismissive: He was accidentally run off the road and killed (yeah, right) by a speeding Batmobile driven by the deranged Damian. The two scenes struck me as a statement of sorts on the sheer over-saturation of the Joker, a villain who’s appeared in 44 comics in 2008 alone! A character that almost anyone in the DC Universe can hold their own against is a character who can be sucker-punched by nutty Batman wannabes. Couple that with his ubiquitous presence in Bat-books proper and the persistence in characterizing the Joker as the biggest and most unstoppable mad-murderer in history and you have a Batman who’s rather ineffectual, too. But I digress.

END_OF_DOCUMENT_TOKEN_TO_BE_REPLACED

The Stories That Informed ‘Batman R.I.P.’

“Criminals are a superstitious cowardly lot. So my disguise must be able to strike terror into their hearts. I must be a creature of the night, black, terrible …a…a…”

As if in answer, a huge image of a Caped Crusader flashed across a movie screen. Across monitors throughout space and time and other dimensions.

“It’s an omen!” each man, alien and other-dimensional imp declared. “I shall become a Batman!”

One of the attractions of Batman was, it’s often been said, the fact that a kid could actually imagine growing up to be the Caped Crusader. No one was ever going to grow up to be Superman but with an extensive training regimen (and a hefty bank account) …well, anything’s possible. Overlay that with the spirit of mainstreaming and conformity of the 1950s and you end up with a universe where there seemed to be a Batman knock-off on every corner and planet.

In 1964, editor Julius Schwartz found his arm twisted into taking over the flagging Batman titles. He immediately ditched the extended Batman family and the increasingly prevalent space alien stories for a more contemporary angle grounded in the real world. And as the years rolled on, Schwartz and company refined their approach and gradually, permanently put the Dark back in their Knight.

END_OF_DOCUMENT_TOKEN_TO_BE_REPLACED

In today’s Action Comics #870, Jonathan Kent dies. Again.  While this is his first death since 1985’s Crisis on Infinite Earths, it’s a significant alteration to Superman’s status quo. ComicMix asked historian John Wells to take a look back at the character’s role in Superman’s life.  Graphics were selected and are courtesy of our pal Mark Waid.

A bitterly fought election had come to a close but the victor had little time to enjoy himself.  Instead, still in a rage over a blackmail attempt targeting his family, Jonathan Kent clutched his chest and collapsed, dying in the arms of his wife and son.  Speaking of this pivotal event in Smallville’s 100th episode (January 26, 2006), executive producer Al Gough told TV Guide that this was “part of the Superman mythology that was always going to have to be told.”   But did it really correspond with the comics?

In the beginning, Ma and Pa Kent didn’t exist at all.   As far as Action Comics #1 (June 1938) was concerned, the infant Superman was simply discovered by a passing motorist and dropped off at an orphanage.  And, even with a considerably longer account, the 1939 Superman comic strip stuck to that particular detail.  Ultimately, it was 1939’s two-page origin at the front of Superman #1 that set down many of the details that fans would consider sacrosanct.    Here, the Kents were actually shown discovering the super-baby’s rocket and asking a relieved orphanage to adopt him.  And, as the vignette concluded, Clark Kent was seen standing at his foster-parents’ graves, inspired to honor their memory by becoming Superman.

The subsequent Superman radio show sidestepped the issue of Clark Kent’s formative years altogether.  In this one, the passing motorist didn’t find a baby.  Inside this rocket, he found a full-grown Superman ready to take on the world.  Yikes!