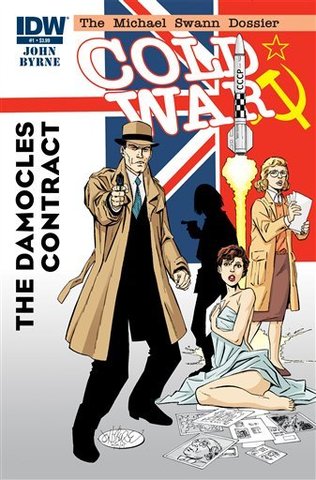 There were three phases the entertainment industry went through during the Cold War. The first was “The Russians are Coming!” when movies and comics and what have you spat out tales of woe like I Married a Communist, in which we were warned that the enemy wore no convenient uniform or had any distinct facial features that could tip us off that he was the most horrible man in existence. Then you had the “Man, what would it be like if the Russians were coming?” phase where we had movies like Red Dawn and books like Red Storm Rising, trying to give us an idea of what a real shooting war with the Soviets would be like.

Now we’re in the “Man, remember when the Russians were coming?” phase, where we all get nostalgic for M.A.D and make video games about what it would be like to weather a Russian invasion, like in Call of Duty: Modern Warfare and the like, but in modern times. We’re suckers for traditional western wars, which probably has its roots in fetishizing World War II while forgetting that most combat veterans don’t like to remember what they did back then.

Beth nabbed issue 1 of this comic called Cold War: The Michael Swann Dossier by John Byrne since I professed my undying love for East vs. West in my Supergod review, and she thought this would be right up my alley. I like it a lot.Well, it’s kind of generic, but we’ll talk about that and whether or not it matters.

END_OF_DOCUMENT_TOKEN_TO_BE_REPLACED

If you ever want to, you can take any history book, cross out the title and scribble “Why The British Are Dicks” on it and it would suffer no loss in its accuracy. Most history after 1600 can be attributed to explaining the meaning of that sentence; Britain and France were the biggest colonial powers in the last couple centuries, and when they started to realize that they couldn’t actually tell others what to do, they mashed a few cookie cutters on a globe and created a whole bunch of countries that quickly fell into ethnic civil war because their borders were based on the location of natural resources and not tribal boundaries. Ergo, the common governments that were set up by imperialism became mechanisms for conflict as different ethnic groups fought to control it for their own interests.

Oh don’t get me wrong, the British and French produce cool things like “That Mitchell and Webb Look” and Daft Punk, but as far as geopolitics go, don’t bother reading about them unless you want chronically high blood pressure.

Jordan didn’t really have this ethnic problem as badly as, say, Nigeria. The kingdom was made in the early 20th century, and its borders were and are fairly stable. Some extremist elements would say that Jordan deserves to be folded into Greater Israel, but this isn’t a widely discussed idea. The Golan Heights is about the only thing anyone is still arguing over for ownership, at least in the immediate vicinity of Jordan. Otherwise, the kingdom has enjoyed unity ever since its creation.

I only really know Jordan as “one of the countries that got pulverized by Israel in the 1967 war”, so Merik Tadros’ graphic novel “The River Jordan” is an interesting look into a country I have little current knowledge of. It only spends a little bit of time in the country, but it still plays an important role in the themes of the novel.

Illustrated by Greg Houston, this book is based on actual events, and is semi-autobiographical. It follows the story of two families of the Nasir brothers and the tragic events that tear the two families apart. The narrative specifically views the story through the eyes of Rami, the youngest son of one of the brothers. The plot follows the events of the story almost like a documentary, with a voiceover box stating things in plain, factual exposition, even when it lets us see what characters are thinking.
END_OF_DOCUMENT_TOKEN_TO_BE_REPLACED 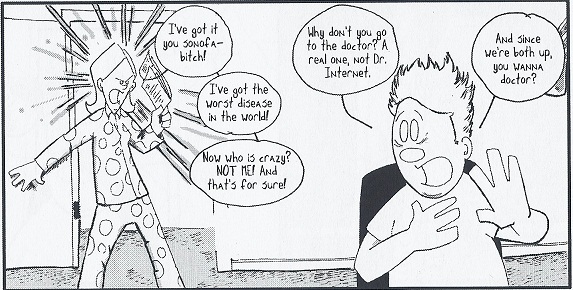 …So after the power outage, my house reverted into a tribalist confederacy and it was up to me to reunite the kingdoms that spawned throughout the house. I conquered the house room by room until I faced off against King Dad in the living room, and with his defeat I became the new king and we all watched Netflix on my Android for–Oh! Hi! Didn’t see you there. I was just describing my week long debacle in the aftermath of a Fimbulwinter-esque storm that crushed the New England area like a gnat under a giant boot made of ice.

What’s that? You want to hear more about this comic called Loserville: And Then You Might Explode? Well you’re in luck, because I happen to have read it in between my conquests and I have to say, it’s all right. Don’t worry, I’ll explain.

Loserville  is a webcomic written and illustrated by Alex J. Cox and published by SLG Publishing, and it’s all about a (relatively) young couple trapped in the mundane machinery of their day to day lives. But this isn’t like any of the normal planets you and I might occupy, oh no. There’s talking animals, time portals, a mascot that haunts your diabetic comas, and a neurological disease that causes you to spontaneously combust.

END_OF_DOCUMENT_TOKEN_TO_BE_REPLACED

REVIEW: FDR and the New Deal For Beginners: Comics That Educate 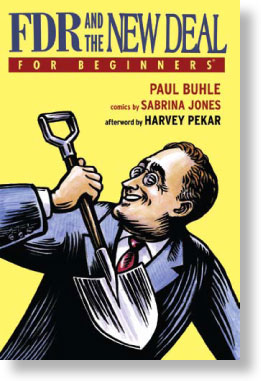 Depending on who you ask, Franklin Delano Roosevelt is either a fantastic president or a menace.

Typically the focus on whether to call him good or bad hinges on your opinion of his New Deal economic program. Advocates say it was a helping hand in a time of need, especially after President Hoover exacerbated the troubles of the Great Depression. Opponents say that the New Deal was ineffective and that therefore it should be dismantled.

There are some who go farther, like when Father Coughlin called him “Franklin Double-Crossing Roosevelt” and others compared him to a dictator. One thing you can’t deny, though, is that being president during the Great Depression, World War II and pulling a country through both events successfully while paraplegic is pretty hardcore.

FDR and the New Deal For Beginners is a book aimed at teaching the unfamiliar and the amateur about just exactly what FDR was all about, and what the New Deal consisted of. If you’ve never heard of this man, this book will give you a great overview of his presidency, from his early life all the way through his last term. END_OF_DOCUMENT_TOKEN_TO_BE_REPLACED