The Law Is A Ass #456: Supergirl Contracted Stupidity 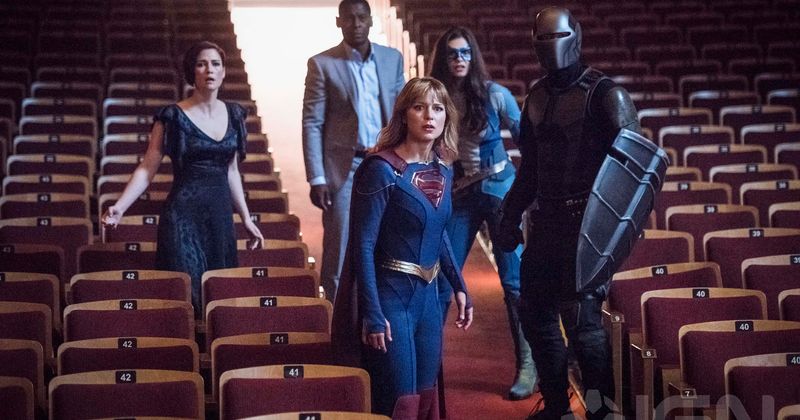 No, we don’t need the Wayback Machine, today, we can get by with the Halfback Machine. (Be glad it wasn’t the Nickelback Machine.)

The last time I wrote about a TV show it was The Wild Wild West, so I needed the Wayback Machine, because, while that show may not date back to when Adam was a pup, it does go back to when Eve was a rib. This time I’ve set my crosshairs on Supergirl, Season 5, Episode 1, “Event Horizon.” That was only a year or ago, so I can use a time machine that has short range and even shorter reach; my memory.

In “Event Horizon” we learned Lena Luthor had to raise capital for a new project so she sold her holdings in CatCo; the news conglomerate which employs Kara (Supergirl) Danvers, Jimmy Olsen, and the other Supergirl characters we care about; to Andrea Rojas, who took over as both owner and as editor-in-chief. Andrea wanted to convert CatCo from a hard news organization to one with more of a revenue-driven thrust. A Buzzfeedesque news network that would provide “water cooler news… that’s just fun to read and just as easy to digest. [because] Everything is about clicks.”

To say said change in editorial policy did not sit well with the Catco staff is more of an understatement than saying Leiningen had a slight ant infestation. (Hey, that’s a classic literature reference, I shouldn’t have to explain it to you.) The CatCo staff believed news should be as hard as well water before Culligan was manned and as probing as alien abductions. Indeed the entire room of CatCo’s top employees threatened to walk rather than go along with Andrea’s clickbait conversion. That’s when Andrea reminded them that they were, “all on a brand new three-year contract,” and that, if they walked, Andrea would enforce the contracts’ non-compete clause, so that none of them could work in the news media for the duration of those contacts.

That’s when my brain went TILT quicker than pinball machine in a temblor.

See what law school did to me? It taught me an analytical thinking process that I can’t turn off. Now, anytime I hear something even slightly related to the law such as “why Andrea had to remind the CatCo staff that they had new three-year contracts”, I start analyzing it to see whether it was logical or plausible or even remotely accurate— or was it the par-for-the-course legal nonsense that popular entertainment customarily palms off with all the dexterity of a third-rate magician palming a coin?

I wracked my brain, because law school wrecked my brain, trying to see if there was any way the CatCo staff could have all gotten new three-year contracts without them knowing about it.

Could Andrea have negotiated new contracts with them without their knowing about it? No. Contracts are a meeting of the minds. In employment contracts they meet when one mind agrees to give something – his or her services – in return for the other mind giving something – remuneration and benefits. It doesn’t take a legal scholar – lucky for me – to know that you can’t have a meeting of the minds, if one of the two sides of a contract doesn’t know a contract was even being negotiated.

Maybe the CatCo contracts had an option clause, like a team option in a baseball contract. One that allowed CatCo to renew a contract at its discretion for a term of service specified in the contract. No. Not logical.

Option clauses in sports exist because a team wants to retain the services of a player if he is still performing at a certain level or to be able to cut that player by not exercising the option, if the player’s skills have diminished. You don’t need option clauses in standard employment contracts. When the employees in question are still young enough that they can be played by performers who are still young enough to appeal to the desired 18-to-34 demographic of a network TV series, it’s not likely that their skills have diminished to the point that they couldn’t perform the standard duties of a standard employment contract. So an option clause wouldn’t be an option.

Could Lena Luthor have been negotiating new employment contracts with the CatCo employees while also, and at the same time, negotiating with Andrea to sell the company and the employees renewed their contracts without knowing CatCo was about to be acquired by a clickbait company? Possibly, but not likely.

Business acquisitions such as this one generally take a long time. Not just because all the executives of the company being acquired are all making sure their golden parachutes are in place but because the rights of the shareholders must also be considered.

It is very unlikely that a major entertainment company such as CatCo was a privately held corporation rather than a publicly traded corporation. Mostly because CatCo would need so much capital to operate that it would need to sell stock publicly to raise operating funds. You don’t think a company like CBS gets all its money from Flo’s audience appeal or those 2:00, 3:00, 4:00, and 5:00 a.m. infomercials, do you?

So, if we assume that CatCo is a publicly traded media conglomerate, Lena couldn’t just call up Andrea and say, “Buy my company, I need the cash.” No, she and Andrea would have to negotiate terms that would satisfy the minority shareholders sufficiently that they didn’t file some sort of lawsuit against the transaction. And those negotiations would have alerted the CatCo employees of the impending sale so that, rather than being sandbagged by it, they could have decided they didn’t want to work for Andrea and her type of news organization and not renewed their contracts.

Which left me with only one alternative. The CatCo employees all signed new contracts willingly and with full knowledge that CatCo was about to be sold to Andrea Rojas, then they all forgot what they had done. And if that’s the case, why did Andrea fight so hard to keep them? Seems to me that people that stupid aren’t capable of reading the news, let alone writing it.