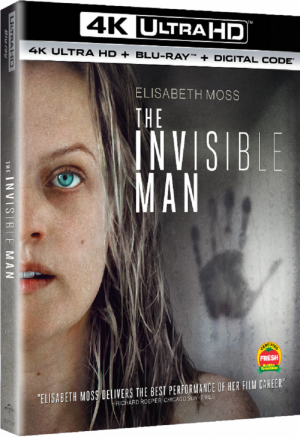 After its creative misfires reviving their classic monsters, it is understandable audiences were cautious about Universal’s latest offering, The Invisible Man. Thankfully divorced from that shared universe, this retelling of the H.G. Wells tale stakes out new ground thanks to surehanded direction and a stellar performance from Elisabeth Moss. The film was one of the few bright spots in the abbreviated 2020 film season and is out now disc from Universal Home Entertainment.

The novel was a product of its time, the science fuzzy enough to be accepted by the genteel readership, the thrills delivered through its gripping third-person narration, a change of pace for Wells, who was rapidly becoming the father of science fiction with his works. There, Griffin altered his physiology to become invisible but grows mad with his attempts to find a way to reverse the process. As serialized, it was a ripping yarn that has been endlessly adapted ever since.

Here, as written and directed by Leigh Whannell, the focus is shifted from the tragic figure to a potential victim. Rather than a science fiction or horror tale, this becomes a psychological thriller, leaving audiences wondering through its 2:04 running time whether the title character is real or a figment of her fractured imagination.

Cecilia (Elisabeth Moss) is trapped in an abusive relationship with the unpleasant Adrian (Oliver Jackson-Cohen), until she enacts a long-gestating plan to run away. After nearly failing, she finds sanctuary for a fortnight with her old friend Detective James Lanier (Aldis Hodge) and his daughter Sydney (Storm Reid). She is suffering a horrible case of PTSD, so frightened of the outside that the concept of seeking professional help (or a restraining order) is beyond her.

Freedom is dangled before her when word is received that Adrian is dead. But is he? Soon, she begins hearing things, seeing things, feeling things that suggest she is being tormented by Adrian but is invisible to the eye. In time, her nerves frayed, her manic tone suspects, she tries to convince James Adrian is back, invisible, and seeking revenge for leaving him. James is concerned and her sister Emily (Harriet Dyer) suspicious of her.

Things build, the tension building with a quickening pace and you can see for yourself what happens next. It is a contemporary spin, for sure, with more a strong dose of female empowerment. While Hodge and especially Rain are underutilized, the film is really Moss’ and she owns it, bringing all her gifts to bear.

The film is out in the usual formats including Blu-ray, DVD, and Digital HD.  The 1080p transfer is very strong which is essential when the visual details count. The colors are sharp and the lowly lit scenes easy to follow. Even better is the Dolby Atmos soundtrack.

Given our limited theatrical choices in the months ahead, you would do well to catch this one.