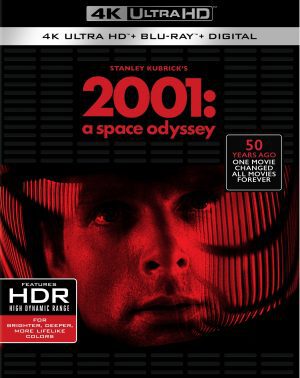 I was ten when I was taken to see 2001: A Space Odyssey for a friend’s birthday. I was coming to love all things science fiction by this point, but the film both dazzled and baffled me. I got most of it up until the final twenty minutes or so and was left utterly confused. I next encountered it at college and appreciate it, as a filmmaking milestone but still didn’t love it, largely because I realize how cold and sterile the future was when I wanted something to look forward to. The star child ending was, thankfully, less a conundrum.

I haven’t seen it all the way through since then, but Warner Home Entertainment changed that with the gorgeous new release, lovingly restored and available in a deluxe 4K, Blu-ray, and Digital HD boxset. There are two Blu-ray discs, one for the film and one for the bonus material plus a small booklet with stills and several gorgeous cards.

The film’s influence on the genre and filmmaking cannot be underestimated since so many revere director Stanley Kubrick’s vision and meticulous approach to production. Where many SF films go from concept to screen in a year or two, this took four and involved the brilliant Arthur C. Clarke, building off his short story “The Sentinel”.

We are taken from the Dawn of Man to the bright future and the evolution of man. Present throughout the millennia are black Monoliths and when one is found on the Moon, broadcasting a signal to Jupiter, things get interesting. The Discovery is sent to explore the newfound alien object and we’re off.

Interestingly, Kubrick and Clarke were trying to be as realistic in examining how space travel in the near future would work as the same time producer Gene Roddenberry was looking a century or two further ahead with vastly different results. Of course, Kubrick had Hollywood film money and Douglas Trumbull on his side while Roddenberry had to feed the weekly prime time maw. (Still, Roddenberry did beat them at the computer going mad four months earlier than the film in “The Ultimate Computer”, take that HAL.)

We follow astronauts Frank Poole and David Bowman (Gary Lockwood and Keir Dullea) resemble the NASA ideal as they exercise, work, and recreate aboard the giant, white spacecraft. Their interactions with HAL 9000 look fanciful a decade or more earlier and today look entirely plausible (thank you, Siri).

I wish the characters were wearer and more human but that was not Kubrick’s style (the same could be said for his final outing as well). DO I better understand the final sequence? Sure because in the intervening years it’s been written about extensively. I still possess the ten year old’s sense of awe at the sheer spectacle of the film even if it is not my favorite SF film of all time.

The new 4K editions was scanned from the original camera negative in 8K resolution reduced to a brilliant 4K in the proper 2.20:1 aspect ratio, graded for high dynamic range in both HDR10 and Dolby Vision. The time and effort that went into perfecting the visuals makes this edition a far cry superior to the one overseen a few years back by Christopher Nolan. The fine detail captured here along with the superb color balance makes this an entirely new film watching experience (I envy those with a nice home theater to watch this in). 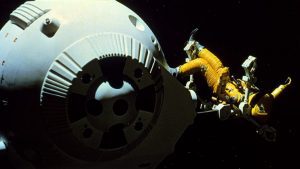 The audio comes as a pair of 5.1 DTS-HD Master Audio lossless mixes, the 1999 restoration and re-mix and the original 1968 6-track 70 mm theatrical audio. Both are wonderful to hear and make you appreciate the classical sore all the more.

The Blu-ray version is remastered from the new source making it a quantum leap better than the previous edition, alone making it worth purchasing.