Spider-Man unknowingly wearing an alien symbiote was perhaps the most interesting thing to come out of Secret Wars but it also thrust the character into a decade of increasingly unfortunate stories as Venom inexplicably proved a popular monster, giving us the even worse Carnage. As a result of the commercial interest in the character, Sony insisted the third film from Sam Raimi include Venom but when the director is told to include something he’s disinterested in, the results are rarely good. With a renewed Spider-Man franchise, Sony is back to milking the cow and offers up a Venom solo film that lacks everything that made Spider-Man: Homecoming so welcome.

The violent, messy film has arrived on disc from Sony Home Entertainment including the popular 4K, Blu-ray, and Digital HD combo pack. Ruben Fleischer directed, which makes sense given the tonally similar Zombieland with a script by Jeff Pinkner, Scott Rosenberg, and Kelly Marcel (never a good sign).

We get journalist Eddie Brock (Tom Hardy), now relocated from New York in the comics to San Francisco, where his failure to interview billionaire Carlton Drake (Riz Ahmed) somehow costs him both his job and his relationship with fiancé DA Anne Weying (Michelle Williams). Instead, he stumbles across an even bigger story: alien symbiotes are on Earth and one bonds with Brock, turning him into Venom.

Brock has to warn the world of the threat while Venom has other ideas until they come to a meeting of the minds. Meantime, there are symbiotes aplenty, chaos, mayhem, and wanton destruction by the ton.

The only reason any of this works is Hardy, who never gives less than 100 percent to a role and while he’s less interesting here than he was as Mad Max, at least gives us a Venom to care about. He pairs okay with Williams who took on a superhero franchise to push herself as a commercial actress and should have considered other roles despite her desire to be a she-Venom in the inevitable sequel. Speaking of which, we sadly get foreshadowing of Carnage (Woody Harrelson, who should know better) in the mid-credits sequence.

The 4K disc shines with great detail for Venom, thanks to superb SFX and you get to enjoy every byte of mucous and slime. The film overall is adequate with solid Dolby Vision (making San Francisco shine) in the HDR transfer at a 2.39:1 aspect ratio; and Dolby Atmos and core 7.1 Dolby TrueHD Master Audio tracks, but not overly superior to the Blu-ray disc (for the budget conscious). 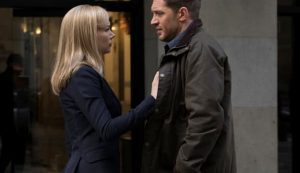 The Blu-ray contains the various special features, pretty much by-the-numbers behind-the-scenes material. The best part is “Venom Mode”, essentially a pop up trivia track when watching the film a third or fourth time.

That said, “From Symbiote to Screen” does have 20 minutes of fan love thanks to the involvement of Kevin Smith, so you can get much of the background you’d want. Then there’s “The Anti Hero” (10:00), “Lethal Protector in Action” (9:00) focusing on stunts; “Venom Vision” (0:00) with Fleischer discussing directing the movie; “Designing Venom” (5:00); “Symbiote Secrets” all about the comic book Easter Eggs; two music videos: “Venom” by Eminem and “Sunflower” by Post Malone, Swae Lee (from Spider-Man: Into the Spider-Verse); and four deleted and extended scenes (the best being the mid-credits sequence). For those who purchase the iTunes version of the movie, you get the exclusive bonus “Friends of Venom” (7:00) with Smith talking about the supporting players.

The 4K disc does have one neat bonus: the Spider-Man: Into the Spider-Verse post-credits scene.

You have to love Venom or Hardy or be a collector to genuinely want this on your shelf. Otherwise, it’s a fairly standard comic book adaptation at a time when the stakes have been raised considerably.