The Law Is A Ass #438: Stu Went Looking For The Old Bailey 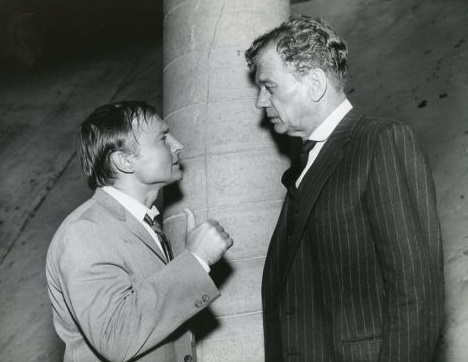 TV or, not TV, that is the question. The answer is TV.

I know, I’ve spent the past five columns writing about a TV show and not comic books, and also four out of the five columns before that doing the same. But sometimes these TV shows are just asking for it.

Like “By His Own Verdict,” the November 15, 1963 episode of 77 Sunset Strip. Okay, most of us weren’t even born when this episode first aired. And those of us who were – like, gulp, me – couldn’t shave yet. But the law involved in the story hasn’t changed in the almost fifty-five years since the episode aired. In fact, it’s been the law since 1910, which is before all of us were born. So the topic is still topical, even if it’s not timely.

Joseph Cotton played Arnold Buhler, a criminal defense attorney who was about to retire. His last case was defending Max Dent, a petty criminal played by Nick Adams who was on trial for murder. Right after the not guilty verdict, Max verified that because of the Double Jeopardy Clause of the 5th Amendment, he couldn’t be tried again for the murder. Then he told Arnold that he was guilty; he killed the man.

All of this took place in the teaser, before the opening credits. In my day, people wrote compressed stories that weren’t being padded for trade paperbacks or season-long story arcs, things actually happened. And they happened faster than a frat boy’s Friday night dash to the toilet bowl.

Arnold was upset. He had prided himself on being able to tell whether a prospective client was guilty or innocent and only representing the ones who were innocent. Max not only blemished that record but that also meant Arnold was complicit in a miscarriage of justice. So Arnold hired private investigator Stu Bailey to investigate and try to determine whether Max was truly guilty.

Stu took the case but without the usual aid of the other members of the 77 Sunset Strip team. This was an episode for the 6th season, after Jack Webb took over as producer, decided the show needed to be film noir rather than light-hearted action adventure show, and jettisoned everything that made 77 Sunset Strip 77 Sunset Strip except for Efrem Zimbalist, Jr. and the title. And the title didn’t even make sense any more. Stu’s office wasn’t on the Sunset Strip, it was in the Bradbury Building in downtown Los Angeles.

While Stu was helping his friend from America’s Old Bailey, we viewers were hoping what Stu would really do was find the old Bailey. Alas and alack, that was not to be. Instead of classic 77 Sunset Strip, we got a muddled story that suffered from a loss and a lack of legal accuracy.

Before Stu had finished his investigation, Arnold began, for want of a better word, stalking Max. No, not for want of a better word; there is no better word. Arnold was stalking Max. Following him around. Bothering him. And finally, hinting that he wasn’t glad to see Max, that was a pistol in his pocket. Arnold told Max that while Max couldn’t be tried in a court of law again, he could be tried by Arnold. Arnold would be Max’s judge, jury. And executioner.

Meanwhile, Stu learned Max was as irredeemable as a book of expired Green Stamps. So, just in time for the fourth act, Arnold announced he had reached his final verdict and went looking for Max.

Arnold found Max in the train yards. Max ran. Arnold chased him, usually with his hand in his pocket where the gun was. While Arnold and Max were playing Hide and Seek, Stu and Marty Kline, the DA who prosecuted Max, were looking for Arnold to stop him from killing Max.

As the doctor in the Myanmar epilepsy ward said, that’s when the fit hit the Shan. Max, after pleading with Arnold to stay away to no effect, pulled out his own gun and shot Arnold. As Arnold lay dying in Stu’s arms, he explained that he had set the score right. Arnold goaded Max into killing him. But Arnold didn’t really have a gun, so Max couldn’t claim self-defense. Max had murdered Arnold. Now Max could be prosecuted for murder again, just a different murder.

Marty the DA lamented to Stu that Arnold wouldn’t get the result he had desired. As Arnold had provoked Max, the best they could do was prosecute Max for manslaughter, not murder.

Bob, the former public defender, lamented that self-defense law must not be on the curriculum in California. Because neither Arnold nor Marty had the slightest idea how it worked.

A person may defend himself when he has a reasonable belief that there is an imminent threat of physical harm to his person. In defending himself, the defender may use the same amount of force being used by person against whom the defender is defending himself. Max reasonably believed Arnold was chasing him with a gun and was going to kill him. That’s what those of us who know how self-defense actually works, call deadly force. Because Max reasonably believed Arnold was going to use deadly force, Max was entitled to use deadly force to defend himself against Arnold.

But, wait, Arnold didn’t have a gun, so he wasn’t going to use deadly force against Max. Doesn’t that disqualify Max from asserting self-defense? Do you really think I would have wasted all these column inches, if the answer to that were yes? If the person has a reasonable belief he is in danger of being killed, he may assert self-defense, even if he is, in fact, mistaken in that belief. Like I said, that’s been the law of the land since at least 1910. Probably longer.

In order to goad Max into killing him so that Max could be prosecuted for his murder, Arnold spent a good part of the episode convincing everyone, especially Max, he was going to kill Max. Max had a reasonable belief Arnold intended to kill him. Meaning Max had a right to use deadly force to defend himself, even though Arnold never actually intended to use deadly force. Max didn’t commit murder or even manslaughter. Max didn’t commit any crime at all. Nick Adams might have been guilty of overacting a bit, but Max, he was as innocent as Dr. Richard Kimble, Jason McCord, and all of Perry Mason’s clients. Combined. (Wow, I really have to kick this fixation on old TV shows.)

Arnold, you knew less about the law than a first year student at the worst law school in the country. And because of that, like Narcissus withering away by that pool of water, you died in vain.