The Law Is A Ass #434: Green Arrow’s Prosecutor Is Trying My Patience 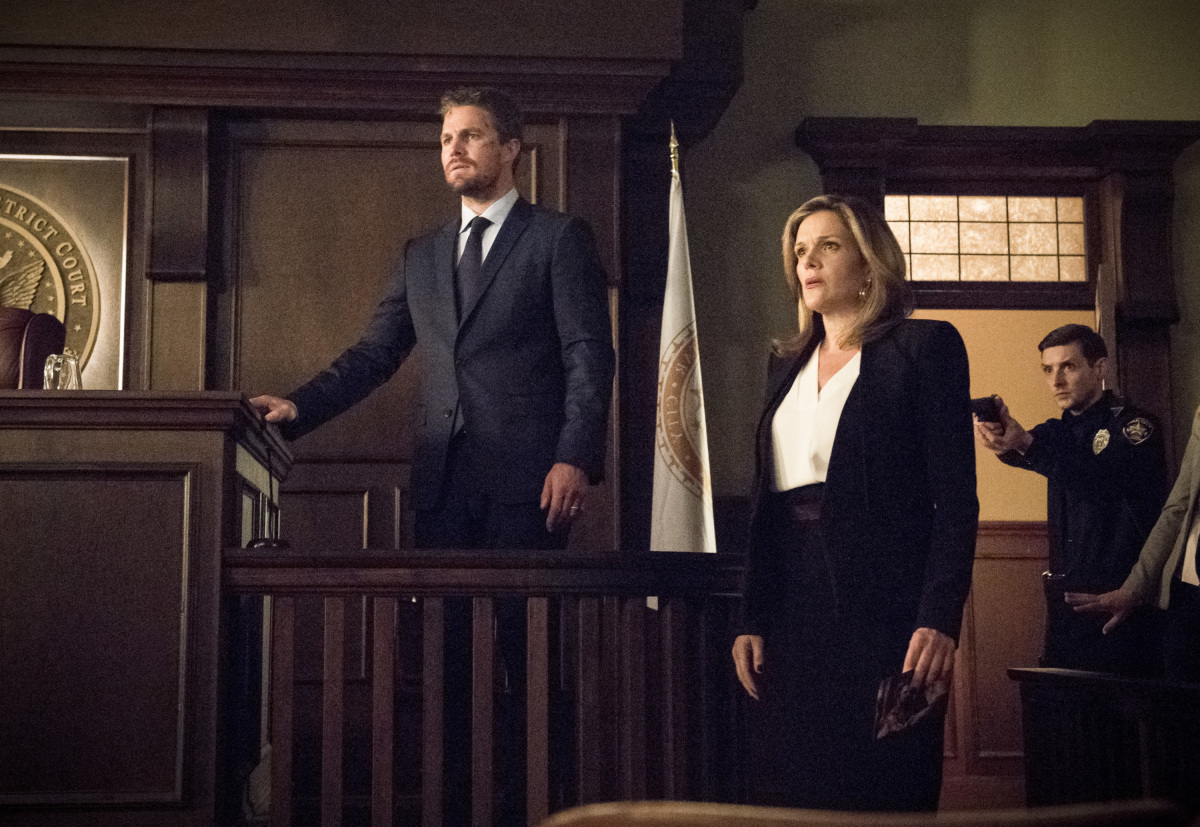 If, as it has been said, a fish rots from the head down, then Team Arrow, from The CW’s Arrow, must be a twenty ton whale shark that’s decomposing from the head, Oliver (Green Arrow) Queen, down through the rotting body that is Green Arrow’s support group, Team Arrow. Why I call them rotten is something we’ll go into as “The Law Is a Ass” continues to suffer the migraine that is the Arrow episode “Docket No. 11-19-41-73.”

Ollie, a super hero in Star City was on trial for violating Star City’s anti-vigilante law and for some homicides and assaults occasioned by the fact that on occasion he shot people with arrows. I started writing about Ollie’s trial last column. I didn’t get too far. I covered the facts that Ollie’s trial was in Judge McGarvey’s courtroom; that McGarvey was under the thumb of Ricardo Diaz, the crime lord who rather openly ruled Star City; that Alexa Van Owen was the prosecutor; and that Jean Loring was defense counsel. I mentioned that Alexa called John Diggle, who was secretly the second-in-command of Team Arrow, and that John, with Ollie’s full knowledge and approval, perjured himself by testifying Ollie was not the Green Arrow.

I pointed out that Alexa wasn’t doing a very good job, because she called witnesses she had not interviewed before trial, so did not know what their testimony would be. I think the second thing they teach you in law school is don’t call a witness about whose testimony you’re uncertain and don’t ask a question whose answer you don’t already know. (The first thing they teach you is how to find the Tuition Office.)

So did Alexa’s job performance improve as the trial went on? Is the Dalai Lama Catholic?

Alexa’s next witness was Dinah Drake, a detective in the Star City Police Department, and also secretly the super hero Black Canary. And guess who didn’t lock down Dinah’s testimony before calling her as a witness?

If Alexa had interviewed Dinah and learned Dinah was going to say Ollie wasn’t Green Arrow, then Alexa wouldn’t have called her. Not calling a witness whose testimony will contradict your case is so basic that not even Dr. McCoy would have quibbled over the logic. If, on the other hand, Alexa had interviewed Dinah and Dinah had told her Ollie was Green Arrow, then Alexa would have had a prior inconsistent statement from Dinah, which she could have used to impeach Dinah’s testimony.

The Rules of Evidence in most states allow a party in a trial to impeach its own witnesses. When the party calling the witness wants to impeach it’s own witness with a prior inconsistent statement, that party must first show that it was surprised by the testimony and that the testimony has affirmatively damaged its case. Or, put in language that even Cousin Vinny could understand, “Hey, Judge, I didn’t know da witness wuz gonna say dat, and it hoits my case.”

If Alexa had a prior statement from Dinah saying Ollie was Green Arrow, she could have argued to Judge McGarvey that Dinah’s testimony both surprised her and hurt her case. After McGarvey agreed — and even this bleeding-heart former defense attorney, agrees Alexa could show surprise and affirmative damage – Alexa could have impeached Dinah with the prior inconsistent statement. That Alexa either didn’t either know what Dinah was going to say or failed to impeach Dinah only shows that she didn’t interview Dinah before trial.

Oh, Alexa did impeach Dinah, but her method of impeachment was just as incompetent as her tactic of not interviewing her witnesses before trial. Alexa asked Dinah, over objection, whether she had murdered a drug-dealer named Sean Sonas. (Dinah had; trust me. I’ve seen all the Arrow episodes so I saw her do it.) Dinah declined to answer on 5th Amendment grounds.

When Alexa asked Dinah whether Dinah murdered Sonas, she violated this principle. Not only should she never have asked the question, Judge McGarvey should have sustained the objection and never allowed the question to be asked. But, like I said earlier, McGarvey was a Black Friday judge; bought and paid for at bargain basement prices.

So for the first – and only – time in her trial, Alexa had a witness who did testify that Oliver Queen was Green Arrow. Then Alexa got to the heart of the various homicide and assault charges leveled against Ollie. She asked Rene if he ever saw Green Arrow kill or maim people. Rene testified that he had, but there were too many occurrences for him to estimate how many people it was.

With that triumphant testimony, Alexa rested her case.

And promptly lost every homicide and assault count leveled against Ollie. Or should have, anyway. This is a TV trial, remember, so we can’t expect it actually to follow such things as burden of proof or proof beyond a reasonable doubt. We can hope, but we shouldn’t really expect it.

Had a competent defense counsel moved for a verdict of acquittal on the homicide and assault counts because the prosecution failed to offer any evidence that the defendant actually killed or assaulted the named victims, it would have been granted. Naturally Jean Loring, didn’t even go through the motions by making the motion. After all, where would the drama in the episode be if a prosecutor as inept as Alexa Van Owen were facing a competent defense attorney?

So after spending a couple of weeks describing what a lousy prosecutor Alexa Van Owen was, is it now time for me to write about what a lousy defense attorney Jean Loring was?

Next time will be.

Meaning this column has run out of what the newspaper game calls column inches. We’ll have to talk about what a lousy attorney Jean Loring was next column. And probably the column after that. There was so much barristerly balderdash in “Docket No. 11-19-41-73” that I’m afraid we’re in for a long haul down the halls of justice.