The Law Is A Ass #433: Green Arrow Wants Me To Trial Little Tenderness 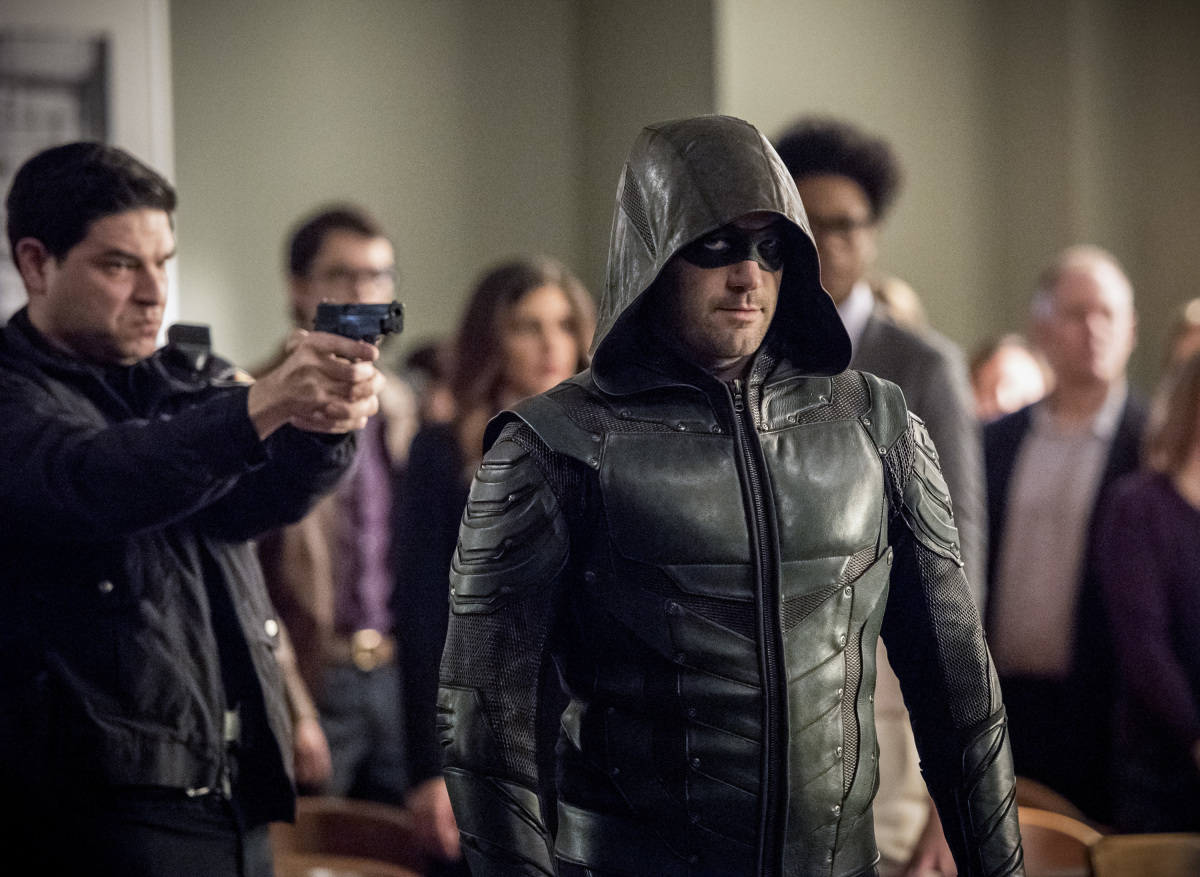 I think I’m losing all respect for Oliver (The Green Arrow) Queen. And considering when the TV series Arrow started he was a stone killer except he killed people not stones, I didn’t have very much respect for him to begin with.

Ricardo Diaz, the crime lord who had taken control of Star City earlier in the season felt it wasn’t enough that he used the corrupt politicians under his control to impeach Oliver as the Mayor of Star City, he also had his underlings prosecute Oliver. Diaz wanted Oliver to spend the rest of his life in prison, while Ollie watched Diaz ravage Star City. Diaz even brought in a special prosecutor, Alexa Van Owen with her 99% conviction rate, to prosecute Ollie. And that still wasn’t the worst thing Diaz did. Considering Kirk Acevedo, the actor playing Diaz, never saw a piece of scenery in the Arrow sets that he didn’t treat as a blue plate special, the worst thing Diaz did was emote.

Now you may be wondering what crimes Star City was prosecuting Ollie for in the case and episode called “Docket No. 11-19-41-73.” Wonder no more, I’m here to tell you.

That is, I would be here to tell you, if the episode had bothered telling us. I know Ollie was being prosecuted for violating Star City’s anti-vigilante ordinance by being The Green Arrow. I know that, because it’s the one count in Ollie’s indictment the episode did bother to mention.

Actually, there were probably multiple counts of illegal vigilantism. Star City Council enacted the anti-vigilante ordinance early in Season 6, so any time Ollie went out as the Green Arrow after that – which, considering the show is called Arrow, was every episode – that was a new, and separately-indictable violation of the ordinance. But there still had to be more.

Laws passed by city councils, as opposed to laws enacted by state legislatures, are misdemeanors not felonies. I’ve mentioned this before and I wish TV people would remember it. Misdemeanors don’t normally carry sentences in excess of one year. Felonies do. Prosecutor Van Owen offered Ollie a plea bargain with a fifteen-year agreed sentence. So, Ollie had to be charged with at least one major felony for an agreed sentence of fifteen years to be considered a bargain.

But what felony? The show didn’t tell us specifically, but it did give us enough information to let me make a law-school-educated guess. I’m guessing there were multiple indictments for the many murders and assaults with a deadly weapon that Green Arrow committed by shooting actual arrows into actual people over the course of the show.

There had to be some murder indictments somewhere in mix, because Ms. Van Owen’s offered plea bargain was to a single count of First Degree Manslaughter. Courts have ruled that a person cannot plead guilty to a crime, if it is not a lesser included offense to one of the crimes charged in the indictment. Pleading to crimes which are not lesser included offenses of one of the indicted offenses violates the defendant’s constitutional right to receive notice.

Moreover, manslaughter wouldn’t contain any elements in common with anti-vigilante. One can be a vigilante without killing people. Hell, as brutal as he is, Batman does it all the time. So manslaughter also isn’t an included offense of anti-vigilante laws. On the other hand, manslaughter is a crime of lesser degree than murder and does contain common elements with murder. So if Ollie was offered a plea to manslaughter, he has to have been indicted for one, or more, murder.

After Ollie turned down the plea offer, the trial started. So did my note taking. Two legal pads and several Bics later, I was ready to start writing about the trial. Lucky me.

Uh, Alexa, didn’t you vet your witness so that you’d know the answer to that all-important question before calling her? No. Okay. Still, a mistake that fundamental makes me doubt that 99% conviction rate. Seriously, on L.A. Law Susan Dey also played a prosecutor named Van Owen who would have done a better job. Hell, Susan Dey’s other big role, Laurie Partridge, would have done a better job.

Alexa’s next witness was John Diggle, Oliver Queen’s personal bodyguard, and also secretly Spartan, the second-in-command of Team Arrow. She asked John if Oliver Queen were the Green Arrow. He said no. And as the head of Oliver Queen’s security, John would know whether Ollie was Green Arrow. Again I’m forced to ask, did Alexa not vet her witnesses before calling them so that she’d know how he would answer her questions?

Okay, I admit that John perjured himself (with the full knowledge and approval of Ollie) because Ollie was the Green Arrow and John knew that. But Alexa didn’t know that. All she knew was that she posed a question to John and she didn’t know that he wasn’t going to give her the answer she was hoping he’d give her.

But Alexa impeached John’s damaging testimony. She pointed out all the injuries he had incurred in his years as Ollie’s body guard, so he couldn’t have been that good a security officer. Right, a body guard got injured protecting his charge; aren’t they supposed to do that? So John was conscientious in his job, that certainly proves he’s an unreliable witness the jury should ignore.

I’d tell you who Alexa called as her next witness, but this column is already pretty long and, when it comes to covering old Docket No. 11-19-41-73, I’m like someone who took sandpaper to his tablet computer. I’ve only scratched the Surface. (I’m not sure I’m even up to the third one yet.)

So, I’ll follow the time-honored tradition that all TV courts use when they need to go to commercial break. This column is in recess and will reconvene next week.