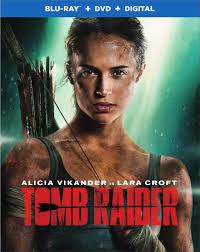 Let me stipulate upfront that I have never played a Lara Croft game or saw the first film adaptation of the Tomb Raider franchise. I have a passing familiarity with her thanks to the virtue of Lara being the first major adventure video game female star (where are the others?). As a result, I approached the Blu-ray release of the March Tomb Raider film, out tomorrow from Warner Home Entertainment, with an open mind.

While Angelina Jolie seemed picture perfect in her turn, the slightly smaller, more athletic Alicia Vikander has made the part her own. It helps that the film is effectively her origin story and for 118 fun minutes, we watch her go from clueless Millennial to adventurer after being told she has to claim dad’s inheritance or lose it all…now. She is 21, aimless, and seeking a purpose when life hands it to her and she decides to grab it. Then hang on to it, when she heads for the isle of Yamatai. Dad (Dominic West) leaves a message warning her off, but by then she’s invested and goes for it. I gather this script from Geneva Robertson-Dworet and Alastair Siddons is based on the 2013 reboot of the video game franchise.

Lara Croft feels right and solid as a character, thanks in a large part to Vikander’s strong acting in any role. Unfortunately, Lord Richard Croft, rival Mathais Vogel (Walton Goggins), and other supporting roles are less well-defined, a disservice to actors involved, notably Kristin Scott Thomas and Derek Jacobi.

The movie zips along just fine and the stunts and escapades feel good, more than just an 8-bit video game come to life, but there’s also an unevenness throughout spoiling the fun.

The film comes in a variety of packages and the Blu-ray, DVD; Digital HD combo pack was reviewed. Word is the 4K UltraHD looks spectacular and since it was shot digitally, it looks pretty darn sharp in 1080p. The lossless Dolby Atmos/TrueHD 7.1 and DTS-HD 5.1 Master Audio tracks are equally attractive.

The film underperformed at the box office, which is a real shame, but it may explain why we get a mere four bonus features. First up, is Tomb Raider: Uncovered (7:04) as cast and crew talk production; Croft Training (6:03), Vikander prepares and gets buff; Breaking Down the Rapids (5:33), Director Roar Uthaug leads us through the set piece; and, Lara Croft: Evolution of an Icon (9:51), a nice history of the video game that became a phenomenon with fans/experts Megan Marie and Erika Ishii giving us gushing context.