REVIEW: The Bridge: How the Roeblings Connected Brooklyn to New York

The Bridge: How the Roeblings Connected Brooklyn to New York
By Peter J. Tomasi and Sara DuVall
208 pages, $24.99, Abrams ComicArts 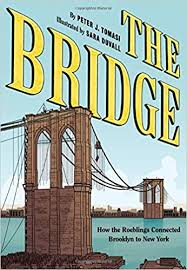 Once upon a time, Brooklyn was a city separate from New York, separated by a river and giving rise to vastly different cultures. Yet, people commuted from the Brooklyn shore to Manhattan Island and in the 19th Century, a visionary engineer thought a bridge was needed to connect the two.

The feat of engineering is something worth celebrating and David McCullough did that with his 1972 The Great Bridge, which served as the source for Ken Burns America Collection: Brooklyn Bridge. But, there are other ways to tell that story and Peter Tomasi, a comics writer and editor, has been longing to tell this story for years.

Thankfully, his dream, like John Roebling’s, has become a reality. Unlike the elder Roebling, at least Tomasi is still around to see it. Tomasi is known for how his humanizes his heroes, making them relatable in ways that do not diminish their amazing accomplishments. Partnered with Sara DuVall, we get to see the people who toiled for decades to make the Bridge a reality.

As with so much of the 19th century, the story begins with the Civil War as John’s son, Washington, experiences much. A Union soldier, he had been trained at his father’s side and more than once used his knowledge to help construct bridges for the soldiers to use. He saw much, endured much, and brought home those memories and more than few injuries.

Washington also fell in love, meeting Emily Warren at an officers’ dance. They were infatuated with one another and they formed a partnership that was stronger than the steel wire the Roeblings’ factory produced.

No sooner did Washington return from the war in 1865 than he and his father embarked on drafting plans to convince the governments of two cities that a bridge was not only necessary but also possible to build. By this point, the cold, taciturn John has ingrained a worldview and work ethic in Washington that ensured the two would work compatibly which proved fortuitous when the suborn older man died from an untreated infection.

The difference in Washington, much as it separates Tomasi from many of his comic book peers, is the touch of humanity. Over the years between construction (1869) and opening (1883), Roebling goes out of his way to ensure the men’s safety, shortening work hours, having an on-site doctor, etc. His loyalty to the men is inspiring as is his relationship with Emily. She comes into her own as his cheerleader, champion, and ultimately surrogate when he is too ill to leave their home.

With 208 pages to work with, DuVall paces things nicely and her art, simple and clear, helped by Rob Leigh’s strong lettering and nice palette from colorists Gabriel Eltaeb and John Kalisz. They help us see the depths men had to dig before hitting bedrock, the physical and emotional toll the work took, as well as the political shenanigans that almost derailed the project in its final phase.

Overall, this is a masterful use of the graphic novel format to tell an important story in a compelling way. Highly recommended for readers of all ages.