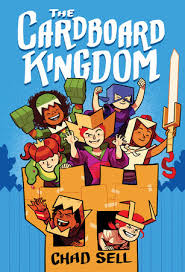 All too often the Young Adult graphic novels crossing my desk live in worlds of fantasy and science fiction, borrowing heavily from what has come before, resulting in a colorful sameness to so many. As a result, The Cardboard Kingdom is a breath of fresh air.

Cartoonist Chad Sell has assembled a team of writers — Jay Fuller, David DeMeo, Katie Schenkel, Kris Moore, Molly Muldoon, Vid Alliger, Manuel Betancourt, Michael Cole, Cloud Jacobs, and Barbara Perez Marquez – to visit a multicultural neighborhood filled with imagination. The boys and girls like to play make-believe games but do so taking ordinary cardboard boxes and turning them into costumes, props, weapons, and the like to aid in their games. Consider it early cosplay training.

This vividly illustrated series of vignettes and short stories has a nice blend of Caucasian, African-American, Indian, and Latin American playing together and as with all friendships; there are strains, fights, and tentative steps at making up. Also unlike so many other YA works, the parents are not all supportive or all clueless, there’s a similar mixture of types, which adds an important dimension to the stories.

Sell’s artwork is clear, his storytelling strong and we see the children as they truly are and as they imagine themselves. Often, there are several silent pages where the writers let the visuals do the heavy lifting. While these are all short works, easily read in batches, there is a continuity throughout the long summer so you can follow a progression.

We watch the children experiment with being heroes, villains, and monsters along with rivalries and unexpected alliances. There’s Jack who wants to be a sorceress and while mom is okay with her son in a gown, but disapproves of his character’s meanness. Miguel and Nate seem to really like one another but struggle with those feelings while playing their traditional male roles. Amanda’s dad speaks little English and represents his Latin home’s conservative values setting up some at-home conflict. Then there’s Sikha, the oldest in the group, is left looking after her brother Vijay, because their single mom works long hours.

Everything builds up to the last all-out campaign before school begins, leaving the readers satisfied with their summer vacation to this imaginative and worthy neighborhood. This is aimed at 9-12 year olds and is highly recommended.