While Waiting for the Final Season, Revisit Westeros in 4K 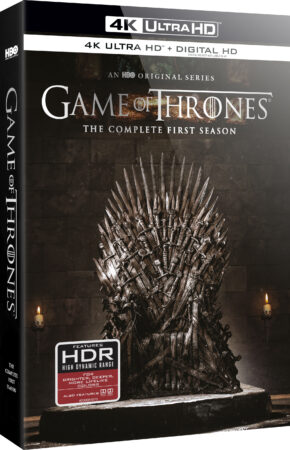 A perfect gift for Father’s Day or way to kick off summer break, the 4K Ultra HD format for Game of Thrones: Season 1 comes with eye-catching key art featuring the iconic, all-powerful Iron Throne. With this release, fans and those new to the series alike can now catch more than 600 minutes of one of the most critically acclaimed first seasons of episodic television in striking clarity.

In addition to Season 1 episodes, fans can go beyond what started it all, with hours of gripping bonus features, from behind-the-scenes, making-of sequences, audio commentaries and much more.

Game of Thrones continues to be the most successful franchise in HBO history and remains the most awarded drama series in Emmy® history, with 38 Emmys® to date.

*Please note: Bonus features will be in HD format.

About Game of Thrones: Season 1
In a land where summers span decades and winters can last a lifetime, trouble is brewing. From the scheming south and the savage eastern lands, to the frozen north and the ancient Wall that protects the realm from the darkness beyond, powerful families are engaged in a deadly cat-and-mouse game for control of the Seven Kingdoms of Westeros. As betrayal, lust, intrigue and supernatural forces shake the four corners of the Kingdoms, their bloody struggle for the Iron Throne will have unforeseen and far-reaching consequences. Winter is coming. Let the Game of Thrones begin.