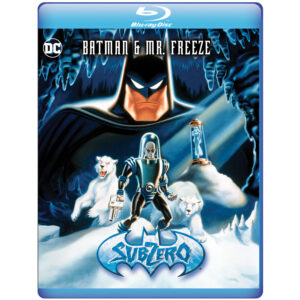 One of the strengths found in Batman: The Animated Series is its compassion for heroes and villains alike. In this series, inspired by the success of Tim Burton’s 1989 feature film, writers and animators alike brought a more adult, more mature approach to the stories, rewriting the rules for children’s animated fare.

In time, this gave them license to explore larger themes through direct-to-video films achieving mostly successes. Overlooked until now, is Batman & Mr. Freeze: SubZero, released this week by Warner archive for the first time on Blu-ray. Written by Randy Rogel and Boyd Kirkland and directed by Kirkland, they build on the tragedy of Victor Fries.

The origin of Mr. Freeze was presented in “Heart of Ice”, written by Paul Dini and directed by Bruce Timm, explaining the accident that forced him to live in a cold suit and what twisted his mind.

This 67-minute film (short by contemporary standards), picks up from his last appearance on the animated series. We find Mr. Freeze has set up a home on an iceberg, dining on fish, and keeping a polar bear for a companion. Everything is fine until the day a submarine, on military exercises, accidentally damages Nora Fries’ containment capsule.

With her life once more in danger, he sets out to revive her by transplanting organs to revive her. Of course, the perfect match is Batgirl (Mary Kay Bergman), setting up the latest confrontation between Batman (Kevin Conroy) and Robin (Loren Lester). It’s a thin premise compared with the richer complexities in similar offerings but there’s enough action and humor to keep it interesting.

The characterizations are a little broader than the series itself so Barbara wisecracks too often and Mr. Freeze is more villainous than filled with pathos. Still, this anniversary edition reminds us of what can be done with solid characters and believable motivations.

The disc wisely includes “Heart of Ice” as well as “Cold Comfort” from The New Batman Adventures, “Meltdown” from Batman Beyond, “Deep Freeze” from The Adventures of Batman and Robin.  Finally, there is “Get the Picture: How to Draw Batman” and “Art of Batman: Music Montage”.