Justice League should have been the super-hero film of 2017 but instead, was deemed an improvement over Superman vs Batman but not the blockbuster fans hoped for and Warner Bros prayed for. While it’s incredibly sad why director Zack Snyder had to bow out in favor of Joss Whedon coming in to handle reshoots but the finished product is a much-needed course correction from the wrongheaded approach to super-powered people. By lightening things up, Whedon helped us welcome the new heroes and formation of a team.

That the threat was incredibly boring has to be laid directly at the feet of screenwriters Chris Terrio and Snyder. He feels straight out of central casting with nary a hint of the Jack Kirby bombast that was woven into his Fourth World. There’s nothing wrong with a CGI villain (Gollum, Thanos) so it comes down to writing and performance and in both cases, they fail.

The movie, out now from Warner Home Entertainment, is worth a second look because there’s a lot to admire, starting with the easy comradery between Gal Gadot’s Wonder Woman and Ben Affleck’s Batman. By picking up in the wake of Superman’s seeming death, we see the need for a team, a new for positive energy. From there, we look in on Aquaman (complete with Amber Heard cameoing as Mera, a nice tease for their film in December), Flash, and Cyborg, each approaching the notion of a team from different perspectives.

After that, there are extended action sequences that all go on too long and three Mother Box McGuffins that we all know will be united for the climactic battle so the level of suspense is low. The same with the resurrection of the Man of Steel (Henry Cavill), which should have been epic but is oddly underplayed.

All in all, it’s a fine, but underwhelming outing, not at all living up to the hype when DC belatedly launched their shared cinematic universe. The transfer to disc is equally adequate, leaving you wanting more and better.

The special features found in the Combo Pack (Blu-ray, DVD, Digital HD code) are a fairly typical and unexceptional collection of featurettes. 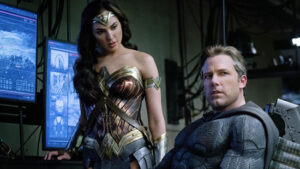 We start with Road to Justice (14:10) wherein Bruce Timm, Dan DiDio, Jim Lee, Marv Wolfman and others briefly walk you through highlights of the team’s comic book existence. In Heart of Justice (11:52), the filmmakers and cast extol the virtues of the trinity: Superman, Batman, and Wonder Woman. The rest of the team get their due in Justice League: The New Heroes (12:24), hosted by Ray Fisher but also featuring commentary from Jason Momoa and Ezra Miller. Technology of the Justice League (8:14) looks at all the new toys that were created for the film. Ciarán Hinds tries to make Steppenwolf the Conqueror (3:03) sound far more interesting than he appeared in the film.

While we all hoped to see more of what director Zack Snyder had trimmed out of the final cut, all we get in the way of deleted scenes are tow focusing on The Return of Superman, portions of one we saw in the trailer.

There are a series of Scene Studies (15:16) that look at how different set pieces were achieved including Revisiting the Amazons (the best of the bunch); Wonder Woman’s Rescue, Heroes Park; and The Tunnel Battle. 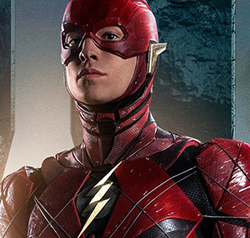 Suit Up: The Look of the League (10:21) shines the deserved spotlight on Costume Designer Michael Wilkins, who gives us a look at how each JL member’s look was created, crediting all the diverse hands that contributed to the process.

What’s missing? Any sense that Joss Whedon was involved in the film. He’s not seen in any of the BTS material nor is there any discussion of his contributions including just how much of the finished product was his. This explains, of course, why there’s no director’s commentary. Snyder is also absent as a talking head, letting his producer wife Deborah Snyder represent the pair.

With Shazam, Wonder Woman 2, and Suicide Squad 2 all shooting this year, the DC cinematic universe seems here to stay and we can hope things improve with each subsequent film. This is a stumbling step in that direction.