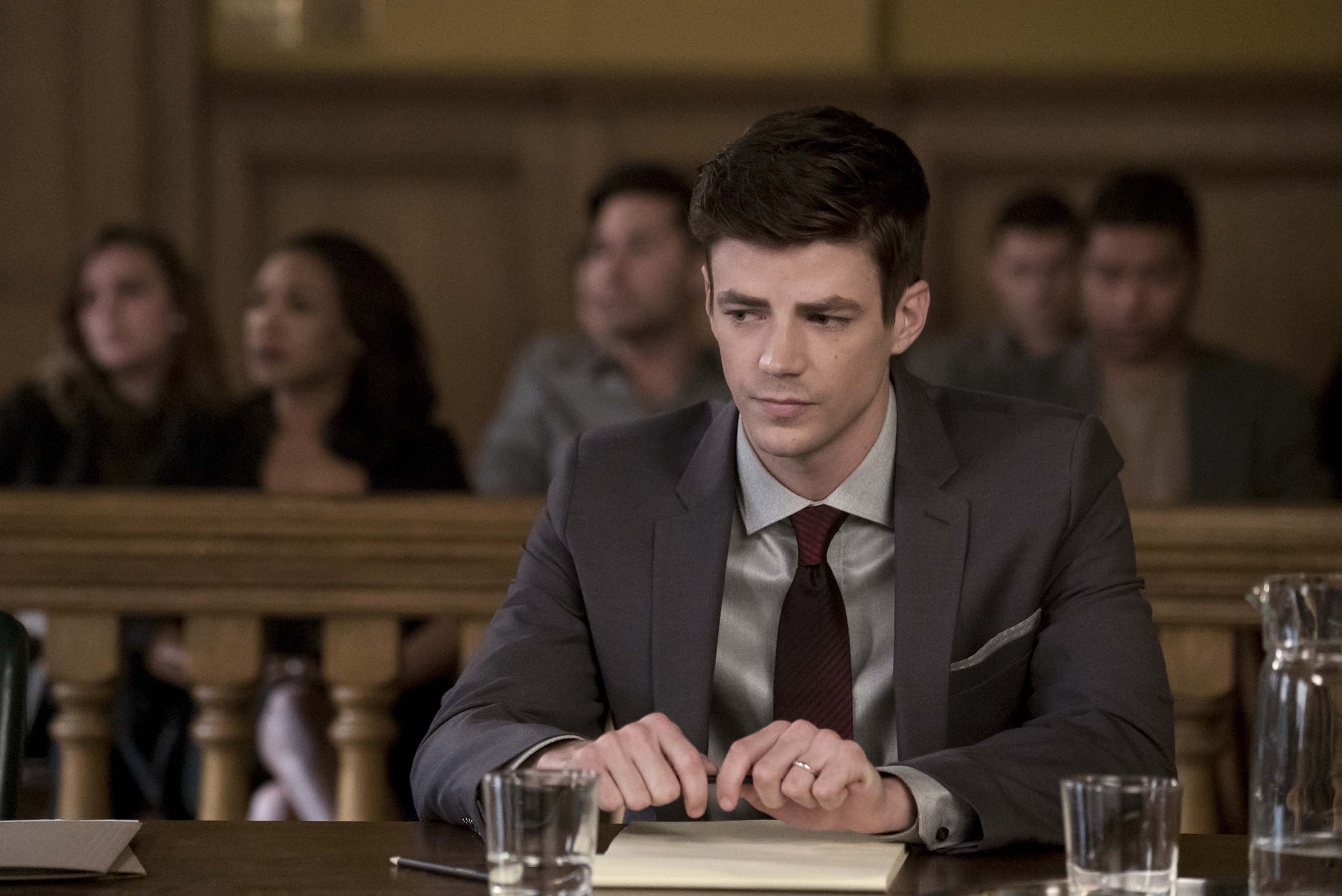 It’s just like riding a bike. Once you’ve done it, doing it again is easy.

Anyway, The Flash – err, Barry Allen – was on trial for killing Reverse-Flash – I mean Clifford DeVoe; damn that muscle memory. Barry didn’t kill DeVoe. DeVoe, the super genius dubbed The Thinker, had transferred his mind into the body of a man named Dominic Lanse, because DeVoe’s own body was paralyzed and atrophying. DeVoe took his lifeless shell of a former body to Barry Allen’s apartment, stabbed it with one of Barry’s knives, and arranged for the police to find Barry standing over the body. Presto, Barry was framed better than Dogs Playing Poker.

Damn it! You’d think that after thirty years my fingers wouldn’t automatically write about the events of that old “The Trial of The Flash.”

Oh wait. Cecille wanted to do that in the current “The Trial of The Flash,” too. She decided the only way for Barry to beat the case would be for him to testify, which would require revealing his secret identity. No logical arguments such as, Barry is an expert forensic scientist for the police, so would he plan a crime so clumsy that all the evidence pointed to him. Or, if Barry had actually knifed DeVoe to death, why wasn’t there any blood on him when the police found him? Nope, nothing like that could be tried. Or tried. Only revealing Barry’s secret identity so he could testify could save him.

Uh, Barry, you and your father-in-law, Joe West, are police officers who have openly worked with Team Flash in the past. I think you and Joe are already targets. Cecille, who’s engaged to Joe, used to be a prosecutor. So we can kind of reprise the reprisal for her. And your wife, Iris West-Allen, is a crime reporter who probably already has an enemies list as formidable as Richard Nixon’s. As for your other friends – the super heroes Vibe, Killer Frost, and Elongated Man, the Rogues already hate them, too. But they can kind of take care of themselves.

The point I’m making is that your family and friends already have targets on them. So not revealing your secret identity isn’t really protecting them all that much.

Moreover, at this point who in Central City doesn’t know the Flash’s secret identity? He and his team routinely use their street names while in costume. Their attitude toward preserving Flash’s identity is about as cavalier as a Cleveland sporting goods store in January. And even if there are some members of the general public who don’t know Flash’s identity; which of his Rogue’s Gallery doesn’t know it? Girder knows it. Pied Piper knows it. As does Plastique, Captain Cold, Reverse-Flash, Zoom, Weather Wizard, Savitar, Heat Wave, Abra Kadabra, Clifford DeVoe, and Gorilla Grodd. Did I leave any out? Probably.

So, again, Barry not revealing his secret identity? Not so helpful in the whole protecting-your-family-and-friends department.

The prosecution called Marlize DeVoe, the “widow” of Clifford DeVoe, as a witness. When Cecille cross-examined her, she used some photos that Joe Allen and Ralph (The Elongated Man) Dibny took of her in lip lock with Dominic Lanse. (Remember, her husband’s mind was in Dominic’s body, so she was actually kissing her husband.) Cecille suggested that maybe she and her husband weren’t so much in love and she and her new lover were tired of waiting for her husband to die so killed him.

Which is one of the worst ways to introduce that evidence. Why? Because it gave Marlize an immediate chance to explain the pictures. She said her husband was dying of ALS and she met Dominic, whose father died of the same disease, in an ALS support group. Her husband could see their mutual attraction so he encouraged Marlize to go to Dominic for the things he could no longer give her. It won the jury back to Marlize’s side.

The better way to introduce the evidence is spring it in the defense case-in-chief. Sure Marlize could try to explain it away. But she wouldn’t be able to do that until the state’s rebuttal case which would be hours – or days – later. Any bad feelings the jury might have gotten from the picture would sit in them for those hours — or days – and take root. So maybe, the jury wouldn’t buy into Marlize’s explanation quite so easily. That way, the closing argument of “We only have her word that she had her husband’s blessing. Maybe she and Dominic were tired of waiting for Clifford DeVoe to die and decided to do something about it,” would have had more effect.

And, for that matter, did anyone think to check out Marlize’s story? Did Dominic’s father really die of ALS? We know they didn’t meet in a support group, so why not check into his father’s death. If Dominic’s father did die of ALS – and what are the odds of that? – nothing’s changed. But if he didn’t, then Marlize committed perjury and the jury would have discounted most everything she said. To answer my own question, no one bothered to check Marlize’s story. So there’s some good criminal defense work.

Yes, “and.” It’s happened again. I’ve run out of column before running out of material. Only this time it isn’t muscle memory causing me to re-type something I wrote back in 1983. This time it’s happening now. Seems that no matter what century I’m in, I’m fated to write endlessly about “The Trial of The Flash.”

Tags: The FlashThe Trial of the Flash