REVIEW: Lady and the Tramp 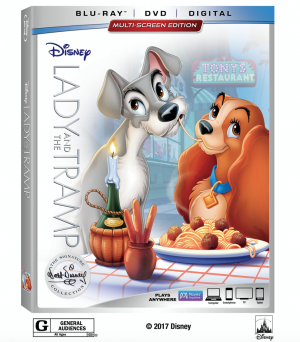 The 1950s was an interesting era for Walt Disney as they moved further away from movies with humans as the protagonist to ones featuring anthropomorphic animals. Although work had begun a decade earlier, 1955’s Lady and the Tramp is one example and one of the more charming stories, if lacking in the wonder of earlier efforts.

We’re given the chance to revisit this now that Disney has made it their latest Signature Collection release, offering it in a Multi-Screen Edition (we used to call them Combo Packs so you get the Blu-ray, DVD, and Digital HD code).

You mention Lady and the Tramp and the iconic image of the two dogs sharing a romantic spaghetti dinner springs to mind, usually accompanied with snatches of the memorable soundtrack. The story is an old one, opposites attract as you can tell by the character names of Lady (Barbara Luddy) and Tramp (Larry Roberts). One is cared for by Jim and Darling Dear (Lee Millar and Peggy Lee), and the other is out on his own, making his way. They meet, as Lady escapes from cat lover Aunt Sarah (Verna Felton), runs into Tramp; sparks fly, and romance ensues.

There’s plenty in Disney’s fifteenth full-length animated feature to amuse kiddies and engage whole families. The music is good; the animation is fluid and energetic, superior to the more contemporary analog, Oliver and Company.

The 1080p/AVC-encoded video transfer is superb, one of the finest in their library. It is matched by the DTS-HD Master Audio 7.1 surround track. This is, essentially, the Diamond Edition repackaged with some new extras and others relocated for digital-only access.

The following extras carry over from the Diamond Edition:

Diane Disney Miller: Remembering Dad (7:51), Deleted Scenes (19:11); Never Recorded Song -“I’m Free as the Breeze” (1:26): A song Tramp sang that was cut prior to the final version of the film; Audio Commentary: Inside Walt’s Story Meetings.

The following Diamond Edition extras do not appear on the Signature disc, nor do they appear to be in the digital collection archive: Disc Introduction by Diane Disney Miller and Disney Second Screen.

This sixth release in the Signature series has nice elements, but if you have the Diamond Edition, you’re good. The film is a charmer and worth adding to your library in one form or another.