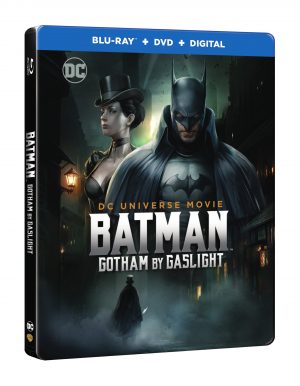 The notion of placing Batman in other times and places seems so obvious now, but when Brian Augustyn first hatched the notion with Mark Waid, it was radical. As Augustyn recounts on the 21 minute Caped Fear: The First Elseworld featurette, it was immediately embraced. So enticing was the concept that when artist Mike Mignola first heard about it, he kept saying he had no time but then kept contributing ideas that it was clear he’d make the time.

Gotham by Gaslight pitted an 1889 Dark Knight against Jack the Ripper, come to Gotham City. It was moody, atmospheric, and somber, a perfect Victorian take on the crimefighter. As a result, it ignited imitators, prompting DC Comics to finally invent the Elseworlds imprint and inspired Augustyn to write a sequel, Master of the Future, set three years later as Gotham hosted the American Discovery Exposition.

It was only a matter of time before Warner Animation tried their hands at the Elseworlds and no title was more fitting to kick it off than this one. The direct-to-video release is out this week and it’s pretty entertaining stuff.

Visually, the color palette is muted and does a fine job evoking the grittier environment from fashion to architecture. It is still too bright compared with Mignola and P. Craig Russell’s art (a shame Russell is never mentioned on camera). Director Sam Liu clearly had a good time exploring the action set pieces in fresh environs so the confrontations are pretty nifty.

Jim Krieg’s adaptation, though, is far from perfect. He can’t resist transplanting modern Bat-mythos figures to the past – a comics trope Augustyn wisely avoid. So, in addition to Batman (Bruce Greenwood) and Alfred (Anthony Head) we have Commissioner Gordon (Scott Patterson), Harvey Bullock (John DiMaggio), Harvey Dent (Yuri Lowenthal)Poison Ivy (Kari Wuhrer), Selina Kyle (Jennifer Carpenter), Leslie Thompkins (Grey Griffin), Hugo Strange (William Salyers) and others. A few would have been fine, but it started to feel like one of those television episodes where the main character merely dreams his contemporaries in new roles rather than a fresher take.

He also melded elements from Master of the Future, notably the exposition but doesn’t sand off the edges. The sequel was more about changing eras and the need for a Batman which is sadly missing here. What Krieg does get right, though, is treating Dick Grayson (Lincoln Melcher), Jason Todd, and Tim Drake (Tara strong) as a trio of street urchins in needs of Bruce Wayne’s protection, or more accurately, Alfred’s involvement.

The nicest addition he makes is a genuine romance with Selina that feels mature and right for the time. By expanding the 48-page comic into a 78-minute feature, Krieg also plays around with the identity of the Ripper – totally changing Augustyn’s story. It’s twisted stuff but veers into melodrama as we build towards the fiery climax.

Others have raved about this one, but I prefer the source material, and think they’ve done better adaptations. You can make up your mind by checking it out on streaming video or buy the combo pack which comes with a 4K Ultra HD, Blu-Ray, and Digital HD code.

Beyond the featurette, we get the usual preview of the next offering, April’s Suicide Squad: Hell To Pay, which reimagines the team as a 1970’s grindhouse production. From what’s shown here, it wants to be Tarantino and falls far short.