Cinamon Hadley, The Girl Who Was Death, Has Died 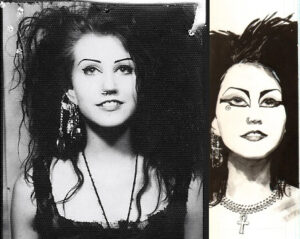 Cinamon Hadley, whose appearance inspired the look of Death in the Sandman comic series, passed away today according to Sandman co-creator Neil Gaiman.

The body-piercer and goth icon whose portrait was immortalized as the second eldest in a family of anthropomorphized forces called the Endless, Hadley was described as extremely tall, extraordinarily thin, with bone-white skin, impeccable make-up and thin, black hair.

According to Gaiman in The Sandman Companion, he imagined the character as looking like ‘60s singer Nico as she appeared on the cover of Chelsea Girl. But the comic’s artist, Mike Dringenberg, had other ideas, and thought of a good friend in Salt Lake City. Gaiman writes, “He sent me a drawing based on a woman he knew named Cinamon—the drawing that was later printed in Sandman 11—and I looked at it and had the immediate reaction of, ‘Wow. That’s really cool.’”

Cinamon was diagnosed with the advanced stages of small cell neuroendocrine carcinoma of the colon in 2017. After a brief remission, the cancer returned and spread.

Our condolences to her family, friends, and fans. We hope she’s well met by someone who looks a lot like her.