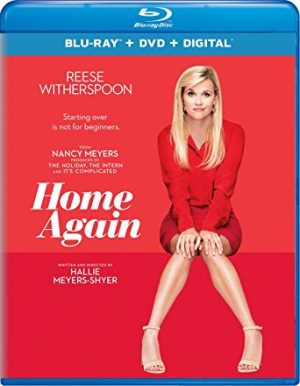 With the comic book-based movie ascendant, other genres have worn out their welcome with audiences, largely given to them being played out mines of creativity. One such casualty of staleness was the romcom; I would argue we haven’t had a good one of those in at least a decade. It makes sense, therefore, that the next generation of filmmaker tries the genre. You can’t have a better pedigree for this than Writer/Director Hallie Meyers-Shyer, who with parents Nancy Meyers (The Holiday) and Charles Shyer, were the last interesting purveyors in this field.

The trailers for Universal’s Home Again certainly looked promising with a look at 40-year old single mom Alice Kinney (Reese Witherspoon) raising her two daughters Isabel (Lola Flanery) and Rose (Eden Grace Redfield) in the house her now deceased father owned. He was a legendary director who married his last major star, Lillian (Candice Bergen), who remains a cheerful nudge. Alice is separated from her husband, music producer Austen (Michael Sheen) who can’t seem to make time for his family.

While out getting hammered in celebration of turning 40, Alice and her pals encounter fledgling filmmakers Harry (Pico Alexander), Teddy (Nat Wolff), and George (Jon Rudnitsky), in town to work on turning their short film into a feature. For some reason, none of them have money, but Harry has plenty of chemist with Alice, resulting in the three crashing at her house. Lillian invites them to stay in the guest house our back and so begins the romcom.

The three keep telling us how in awe they are with how well Alice is handling the single mom thing but Meyers-Shyer keeps forgetting to show evidence of this. Instead, these three are like elves who cook, shop, and chauffeur while also working on their careers, collectively and increasingly individually.

All the elements are here for a fun exploration of romance and parenthood in the 21st century but instead, everything is under-baked. The age difference between 20-something Harry and Alice is never an issue, the men’s fraying relationship is more contrivance than character-based dilemma, and the ultimate arrival of Austen in the mix goes along predictable lines. In fact, the further into the film we go, the more predictable the plot points get, robbing the film of being truly engaging.

The film is out now on a Combo Pack from Universal Home Entertainment so you get a fine high definition transfer, a DVD, and Digital HD code. The DTS-HD Master Audio 5.1 lossless soundtrack is equally competent.

Despite middling to positive reviews, the movie underwhelmed at the box office, which may explain why the sole special feature is an audio commentary with Meyers-Shyer and mama Meyers.