Martha Thomases and the Multi-Dimensional Geeks

This past weekend I had a truly multi-dimensional geek experience.

I went to the New York State Sheep and Wool Festival, which is the San Diego Comic-Con of fiber nerds. I went with two women I’ve known since we were in boarding school together. One is now a judge in appellate court, and the other works for a local historical society. I would like to say that we had a highfalutin’ philosophical discourse as we drove to the Dutchess County New York Fairgrounds and carefully walked among the sheep, but mostly we talked about yarn and comics. One of my friends had read a piece in her local newspaper about the traditional book publishers who exhibited at New York Comic-Con (alas, I cannot find a link). I tried to explain that this was nothing new, but I’m not sure I succeeded. 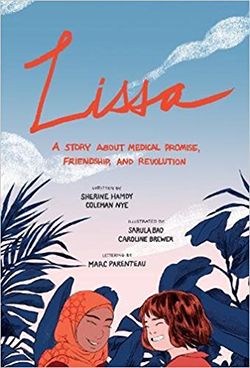 I wish she had been able to come with me on Sunday, when another friend was kind enough to take me to the American Museum of Natural History for a panel about “Ethno-Graphics” about anthropology and graphic story-telling.

I was unfamiliar with two of the panelists, Lucio Zago, the writer and artist for Williamsburg Shorts and Sherine Hamdy, one of the writers of Lissa, and only a little bit aware of the third, Edgard Miranda-Rodriguez, creator of La Borinquena.

The moderator, Catrin Einhorn, is an editor at The New York Times. She seemed quite knowledgeable about anthropology, and perhaps a bit less informed about graphic story-telling. It’s also possible that she spoke less about that aspect so that the panelists could speak more.

Lucio Zago’s book about Williamsburg and the gentrification it has experienced since the early 1990s when he first moved there, sounds sweet and graceful. Alas, according to this, it is out of print. I don’t know if it was ever available beyond the Kickstarter through which he raised funds to publish, and a few copies for local bookshops. In any case, he seemed to be a bit of an outlier at this particular occasion.

Sherine Hamdy’s book, Lissa, is published by an academic publisher, the University of Toronto Press, and is the first book in what is planned to be an entire line of graphic novels. Although a fictional story about two young women and their families, Lissa is a thoroughly researched examination of religion, culture, medicine and class in the United States and Egypt. The back matter runs over a hundred pages, including original research and interpretations of other studies. I’m very curious about this new publishing venture, and whether these graphic novels, like other publications from academic presses, are used as textbooks as well as entertainment. 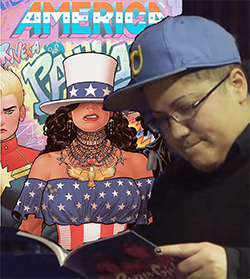 Edgard Miranda-Rodriguez was a bit familiar to me from this write-up, but I had no idea what a firebrand he was. He created a Puerto Rican super-heroine because that is exactly the comic book he most wanted to read when he was a kid, and it’s the comic he most wants his kids to read now. He was careful and deliberate to credit other Puerto Ricans working in the medium today (especially ), and more than anything I wanted to ask him if he knew Ivan Velez.

I wanted to ask all three panelists such questions, what one friend of mine calls “Jewish Geography,” although it doesn’t have to be just about Jewish people. It’s what happens when you meet a person for the first time, and try to establish some common ground by asking a few questions (“Where are you from?”) and seeing if you know any of the same people. The panel wasn’t about who these folks knew, however, but rather the anthropological elements of their work, so I restrained myself. Instead, I satisfied my need to feel important by recommending the Eisner-winning Sonny Liew book, The Art of Charlie Chan Hock Chye to the helpless woman sitting next to me, unable to escape my attention.

My high-school friend might enjoy it, too. It’s published by Pantheon, a real book publisher.