The Law Is A Ass: Aquaman Has Problems With His Immunity System 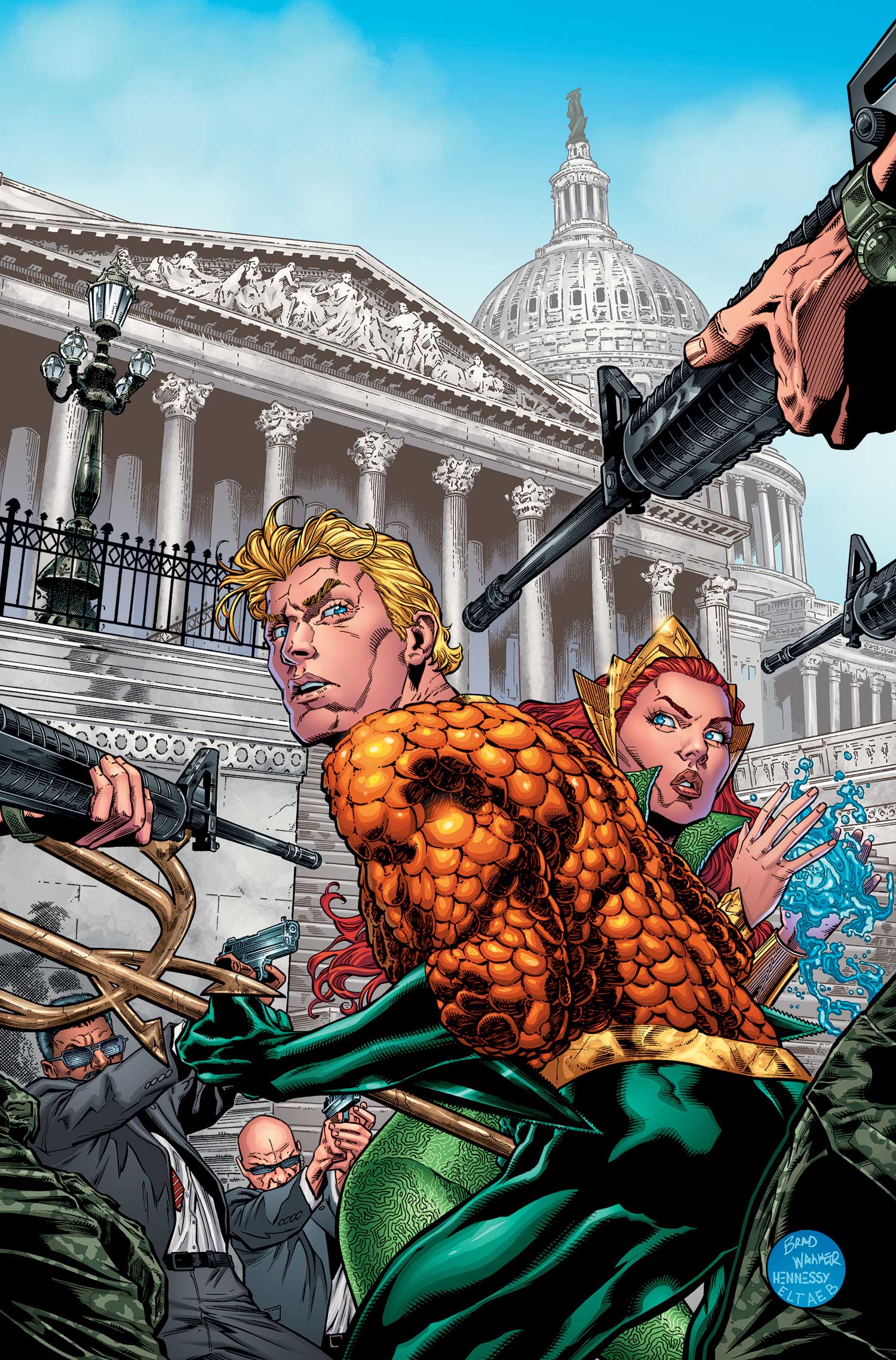 Aquaman has seen better days. He was king of Atlantis and his subjects actually liked him. He was married to Mera and his wife actually liked him. His villains were so lame not even Jesus could make them walk. Even the Fifth Dimensional imp that appeared in his book was an ally named Quisp and not a prankster that would make Aquaman Quake in his boots. Why, Atlantis even got along with the United States of America.

Now, Aquaman’s life is like a bad cover of a Bob Dylan song, the times they are a changin’ but not in a good way. He and Mera were never married. He’s been deposed as king. Quisp’s now named Qwsp and is malevolent. Oh, and the United States and Atlantis were at war, meaning Aquaman’s life wasn’t just a changin’, it was a changin’ into Sub-Mariner’s.

And for the better part of last year, Aquaman was in one of those Asian bootleg versions of a Pixar movie, because he spent his time finding N.E.M.O.

What’s N.E.M.O.? The Nautical Enforcement of Macrocosmic Order was a clandestine organization of rich people that’s been secretly trying to rule the world through control of the oceans since 1872. Which means it’s the Court of Owls but with bad mortgages; cause it’s under water. After all, what’s a comic book series without a super-secret shadow agency that’s operating right under the very nose of the super hero who should know about it?

(Seriously, Batman didn’t know the Court of Owls was operating in Gotham City? Maybe the New 52 Batman, but the Batman I grew up with would have infiltrated the Court before its second board meeting. And Aquaman one-ups Clint Eastwood in Paint Your Wagon; he talks to the seas https://www.youtube.com/watch?v=nn8YubD01sk. Not one fish in the entire world noticed the increased activity of surface dwellers dating back to the 19th century and reported it to Aquaman?)

N.E.M.O. knew it had to deal with Aquaman so it sent operatives pretending to be Atlantian soldiers to attack a United States war ship, the U.S.S. Ponchartrain. Result: Aquaman was arrested under the P.A.T.R.I.O.T. Act for crimes against the United States. (Crud! I think I just wore out the period key on my computer.)

Yes, in Aquaman # 3, the United States arrested Aquaman, the King of Atlantis. Hey, there had to be some law in the story somewhere to justify my writing about it. This is it.

Back in the day, the day being back when Marvel was allowed to print Fantastic Four comics, there were Fantastic Four comics in which they fought Doctor Doom. Lots of them. And, because Doom’s appearance on a cover could spike sales, there were also stories in which the other heroes in the Marvel super heroes fought Doctor Doom in their books. Many of these stories ended the same way; the heroes stopped Doom’s plan, but wouldn’t be able to arrest him, because Victor von Doom was also the king of Latveria. So Doom claimed diplomatic immunity to prevent his being arrested.

While I’m not sure diplomatic immunity works in real life quite the same way it works in comics, it is real. It gives diplomats safe passage in the countries they visit and renders them not susceptible to either lawsuits or criminal prosecution under the host country’s laws. The concept of diplomatic immunity dates back centuries. Then it was codified into international law in the 1961 Vienna Convention on Diplomatic Relations and has been ratified by all but a handful of nations. And if you think diplomatic immunity isn’t real, just ask New York City how much fun it’s been having trying to collect the almost one million dollars in unpaid parking tickets it has from countries like North Korea, Iran, Syria, and Russia.

So when I saw the scene of Aquaman being arrested, my first thought was: As king of Atlantis, wouldn’t Aquaman have diplomatic immunity from prosecution, just like Doctor Doom had? Then I found the answer to the question in the place where I find the answer to so many of life’s questions, Columbo.

Yes, the TV show starring Peter Falk. That Columbo. There was an episode of the show called “A Case of Immunity” from October 12, 1975 – so almost exactly 42 years ago; god I’m old – where Hector Elizondo  played a chief diplomat from the Arabian nation of Suari. As part of a plot to usurp power, he killed an embassy security officer. Columbo knew Elizondo was the murderer, but couldn’t prosecute him, because Elizondo enjoyed diplomatic immunity. You’d enjoy it, too, if it meant you could get away with murder. Ultimately Columbo prevailed because Columbo always prevailed. Oh, and because he goaded the diplomat, who had no fear of being prosecuted, into confessing to the crime.

But Columbo had arranged for the new king of Suari to be in the next room. The king heard the confession and ordered Elizondo to be taken back to Suari and tried for the murder. As Suari had the death penalty and in 1975, America did not, Elizondo waived his diplomatic immunity so that he would be tried in the United States.

So, as I learned from Columbo, diplomats and kings can waive their diplomatic immunity if they so choose. Aquaman chose to do just that so that he could prove that Atlantis did not attack the Ponchartrain and make sure that US-Atlantis relations were not damaged any further.