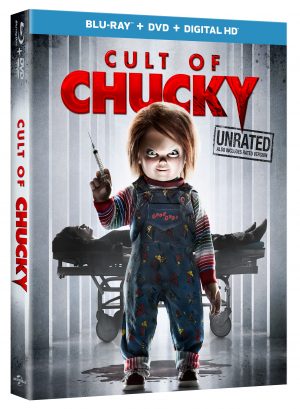 You can’t keep a good demonically possessed doll down. Cult of Chucky,  wwill be available on Blu-ray, DVD and Digital HD October 3rd,  and thnaks to our friends at Universal Home Entertainment, we have one combo pack to give away.

Confined to an asylum for the criminally insane for the past four years, Nica (Dourif) is wrongly convinced that she, not Chucky, murdered her entire family. But when her psychiatrist introduces a new group-therapy tool — a “Good Guy” doll — a string of grisly deaths plague the asylum and Nica starts to wonder if maybe she isn’t crazy after all.

For you to win, all you have to tell us which childhood toy truly terrified you and why. We need your responses no later than 11:59 p.m., Wednesday, October 3.  The contest is open only to North American readers and the decision of ComicMix‘s judges will be final.