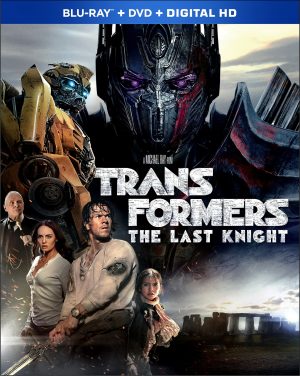 The Transformers mythology is an eons-long inter-galactic tale that is rich in its own history. We have the rise of intelligent techno-organic lifeforms, a split between rival points of view, and a struggle for supremacy. All along the way, for reasons that are never spelled out in their history, Earth has been of particular interest to the Autobots and Decepticons.

That much has powered countless comics, animated episodes, and four live-action feature films. Rather than marvel at the wonders of the cosmos or reveal to us why the planet is important, the fifth installment, The Last Knight, retrofit the Knights of the Round Table to an already convoluted and, frankly, boring film series. This film, out now on disc from Paramount Home Entertainment, more or less retreads the first four films, mixing returning humans and Transformers and adding in a few new figures to freshen things, and yet, no one cares. The film was widely panned and crashed at the box office, another sequel that failed to interest its core audience nor attract new fans.

The blame clearly has to be laid at the feet of director Michael Bay, who is endlessly repeating himself and may have grown just as bored as his audience. The title is a clear link between Cybertron and King Arthur (Liam Garrigan) and tries to make this mess sound important. We have Optimus Prime (voiced by Peter Cullen) turned into his evil twin Nemesis Prime, we have Quintessa (Gemma Chan), who claims to be leader of the Decpticons and a physical manifestation of  Unicron, the source for all Transformers, and even Viviane Wembly (Laura Haddock), who turns out to be Merlin’s descendant, channeling the great wizard. Lots of reincarnation and resurrection, but really, lots of sound and fury without signifying a damn thing we care about.

Mark Wahlberg is back and we wonder why, much as we question Stanley Tucci and Anthony Hopkins slumming here for the paycheck. What should be a Big Kids’ action-adventure romp has grown weighty and ponderous with each successive installment so we can hope the pitiful box office means they will retire or at least retool.

The film is available in all the usual digital formats including the popular Blu-ray, DVD, Digital HD combo pack. There, the high def transfer is sharp and satisfying, surpassed by the top notch audio track.

And if you think the film franchise is tired, the extras carry that theme onto a bonus second Blu-ray disc. There, you can watch Merging Mythologies (19:53), Climbing the Ranks (8:48), The Royal Treatment: Transformers in the UK (27:04), Motors and Magic (14:47), Alien Landscape: Cybertron (7:15), and One More Giant Effin’ Movie (6:45). What it needed was a primer on the larger Transformers mythology and how this film fits in.