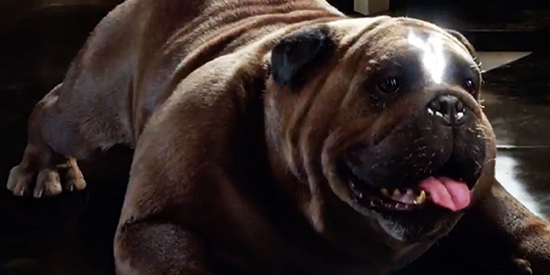 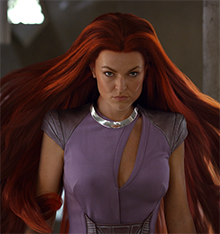 Somehow, I seem to have inserted myself onto the Marvel “Friends and Family” list for preview screenings. A few weeks ago I got an advance look at The Defenders in a small screening room with about 25 people. On Monday, I went to an IMAX showing of The Inhumans with an audience of several hundred.

The environment in which I see a film influences the way I feel about it. I love going to screenings because they make me feel cool and sophisticated. The Defenders event was in the morning, with a group that included people I’d known for decades, in comfy chairs with excellent sight lines. The Inhumans was in an enormous theater, with an enormous screen, and hundreds of strangers (although there were some people I knew, including a new friend, an old friend and a really old friend. 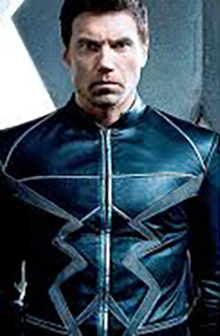 Even before the movie started (and, to be fair, it’s not really a movie, just the first two episodes of an ABC television series), the mood was festive and celebratory. My date, ComicMix colleague Joe Corallo and I found our assigned seats and gleefully looked around to see whom we might recognize. Lots of people brought children with them, and they were thrillingly well-behaved. Before the movie started, we sang a rousing chorus of “Happy Birthday” to Jack Kirby, in celebration of his hundredth. The print was crisp, and the creator credits received applause.

If only I could tell you I liked the show.

I knew nothing about the characters beforehand. I did a little browsing online, and Joe told me a few things (including how great the Paul Jenkins run was). I would imagine that most people who will watch on the ABC television network are similarly ignorant, and the show would allow for that.

It is not good. And it’s not good in a way that makes it seem, to me, to be the anti-X-Men. People with mutant powers are exalted here and given high-status government responsibilities. Those with no powers are sent to work in the mines. 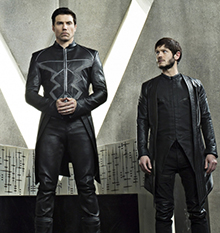 The Inhumans live on our moon, in a city at the border between the light side and the dark side. We first see the king and queen, Black Bolt and Medusa, in bed, where she is using her superpowers (magically manipulating her long hair) to excite him as much as network television allows. These two people are attractive and playful, so I was ready to like them. Also, the actress, who plays Medusa, Serinda Swan, looks like a grown-up version of Ann-Margaret in Pocketful of Miracles, one of my favorite movies.

We see them getting on with their royal responsibilities, as they walk up and down and through the massive castle. First up is a ceremony in which two siblings find out if they have super-powers. It is there that we meet Black Bolt’s brother, Maximus, who we know must be a bad guy because it is the same actor, Iwan Rheon who played Ramsay Bolton on Game of Thrones. Maximus seems to have no powers but is allowed to stay in the royal quarters because his brother is such a softie.

There is lots of back-and-forth travel to Earth, sometimes through a sentient wall and sometimes with a giant bulldog which I think has some kind of fan following (and, hence, anticipation) but which is just a big CGI dog in these first two episodes. There is a royal betrayal, a rebel uprising, and a great escape. Each character gets a chance to use his or her powers, sometimes to great effect, sometimes just because, I assume, Jim Shooter said every character must use powers within the three pages back when he was editor-in-chief at Marvel. Some powers, like being able to come back to life after being killed, seem like a narrative cop-out, a deus ex machina of the gene pool.

A lot more questions were raised for me than were answered. Where does the royal family get all the leather for their outfits? What are they digging for in those mines? Are terrific eyebrows a way to tell which women have super-powers? Where does the food come from? I would have preferred to see more of the city as a whole, and less of the king and queen walking up and down stairs. Also, why are we supposed to think the king and queen are good and Maximus is bad? Wouldn’t it be more interesting from his point of view?

I think that Inhumans wants to be the new Game of Thrones, but without the historical parallels, the multiculturalism, the armies, the enormous cast or the budget. Instead, it seems much more like high school writ large, with the cool kids getting to have a working source of light, and the rabble doomed to the underworld.

Will it get better? Will it be even worse when it’s on a television screen, not in a theater? Will there be dragons or just giant dogs?

Just a reminder: It’s not too late to get in on our Kickstarter campaign for Mine! A Comics Collection to Benefit Planned Parenthood. This book will be full of cool stuff… including a story by Neil Gaiman and Mark Wheatley! You’ll be helping people around the country receive quality health care. We’re on track to hit our initial goal, and if we raise more than that, there will be lots more other goodies. So check it out, and pledge whatever you can afford.

We have to take care of each other.