REVIEW: The Lion King – The Circle of Life Edition 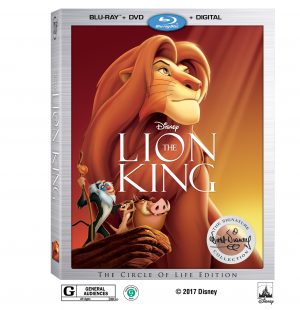 Walt Disney was a canny marketer, cycling his films in and out of release, on and off television, through the years, recognizing it would appear fresh to younger viewers and fondly recalled by those at later stages in their lives. That practice has continued into the world of home video with the films on rotation and we’re now getting The Lion King: The Circle of Life Edition after having received Masterpiece Collection, Platinum Edition and Diamond Edition. The new edition is already available as Digital HD and hits disc today.

An interesting thing to consider about the story itself is that Simba is being trained by his father to one day succeed him as King. This connection with a parent and this effort towards being prepared to rule is entirely absent from any of the Disney Princess films.

Of course, the movie is a wildly entertaining musical which still holds up on repeated viewings. Credit for this has to go co-directors Roger Allers and Rob Minkoff, writers Irene Mecchi, Jonathan Roberts, and Linda Woolverton, and composer Hans Zimmer. The strong vocal cast, led by James Earl Jones, Nathan Lane, Ernie Sabella, Matthew Broderick, Moira Kelly, Jeremy Irons, and many others grounds the production.

Is it a perfect story? Probably not, since there are gaps in time and Simba and Nala seem to be the only ones to actually age. And yes, it still makes me think of Kimba the White Lion but I’ll believe the makers were largely ignorant of this early anime that played briefly in the United States.

From a technical standpoint, this edition is identical, from what I can tell, from the most recent Diamond Edition. It therefore looks brilliant and sounds lovely. 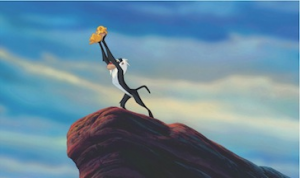 The film is available in a variety of formats and there are some features unique to specific retailers (an annoying trend), but most will receive the film, and a new Sing-Along Version. The Blu-ray, DVD, and Digital HD combo also comes with a Limited Edition Film Frame (a small strip of film; mine had Raffiki holding up baby Simba).

Additionally, there is, held over from previous releases:

For fans of the film, and there are many, the above will be satisfying and enlightening or just entertaining. Sadly, the Classic Bonus Features are Digital only.