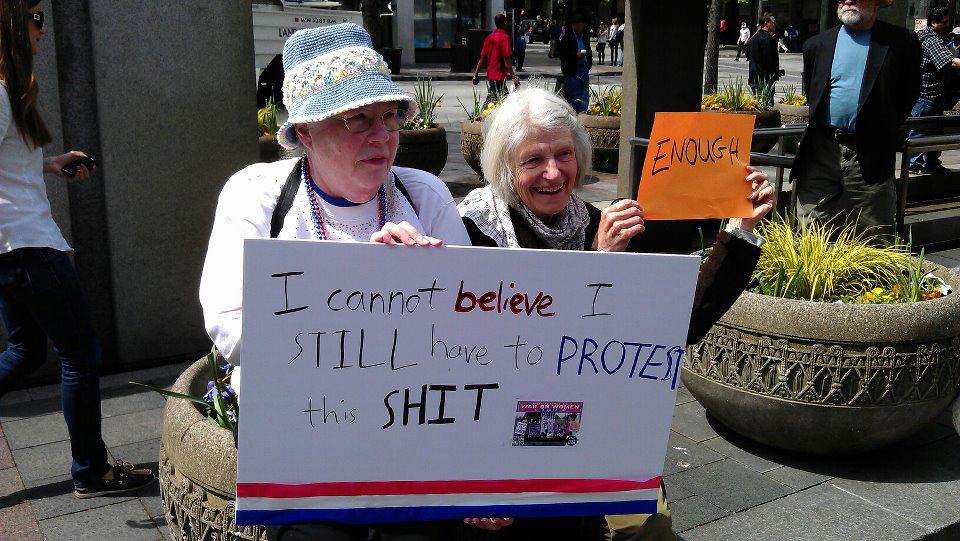 I don’t carry a sign over my head announcing my feminism—I do it with a tote bag from Emily’s List, which I use to, uh, tote my lunch and papers and such back and forth from work.  Said bag is inscribed with the following:

I’ve always thought of “equal rights and opportunities” in terms of work and salary, but I suppose it can also be applied to the prerogative of making a total ass of yourself in public, regardless of gender.

I am referring to the “Whedon vs. Cole” controversy that my buddy John Ostrander talked about yesterday, and which has caused mucho uproar all over the web, including over at the Whedonverse fan site, which is supposedly shutting down over it, although I had no trouble opening the site when I tried today.

As I replied to John,

Struggling man succeeds, becomes rich and powerful and famous.  Man cheats on wife while spewing words about feminism and publicly praising wife.  Ex-wife chooses to feel herself empowered by publicly detailing events that happened while married to ex-husband.  Ex-husband, through a spokesman, says that allegations are misrepresented.

Yes, I am saying that Ms. Cole made an ass of herself as much as Mr. Whedon (allegedly) did.  And no, I won’t be surprised to be hit with outcry and insults from individual women and attacks from feminist websites.  I get it, I do.  What I think is definitely a very unfeminist thing to think.

But sometimes the best thing to do is to walk away and not look back; there’s a Wiccan belief (yeah, I tend to think of myself as a “Jewiccan”) that whatever harm or ill wish you inflict on another will come back to you three-fold.  So allow the universe to take care of it.  Karma, as they say, is a bitch.

John also mentioned his GrimJack episode in which Gaunt shot someone in the back.  Which made me remember the two-part Magnum, P.I. story that opened Season 3 of that venerable and much-beloved series.

In Part One of  “Did You See The Sun Rise?”, a compatriot from their days in Vietnam visits [Thomas] Magnum (Tom Selleck) and his friend TC (Roger E. Mosley), telling them that all three are being pursued by a man named Ivan, a Russian agent who caught and tortured them during the war.  At first, neither believes Nuzo; they think he is suffering from PTSD.  But it turns out that Nuzo is right; Ivan is somewhere in Hawaii. But the Navy wants to keep Ivan alive (for their own reasons) and assigns Lieutenant “Mac” MacReynolds, another friend of Magnum’s, to make sure that he does—they are afraid that Magnum and TC will kill Ivan; in other words, find Ivan, but make sure Magnum does “nothing stupid.”  So Mac claims that he quit the Navy, and starts hanging around with the private eye, saying that he wants to “learn the biz” from Magnum.  After a night oat a bar, Mac says, “Let’s drive up to the lookout point, and watch the sunrise,” rushing ahead of Magnum to get into the Ferrari.  The car explodes.

In the second part, Magnum discovers that Nuzo is actually Ivan’s operative, and that TC was “brainwashed” while in captivity in Vietnam.  Nuzo triggers the brainwashing, which will cause TC to kill a visiting Japanese prince.   Magnum stops TC in time, but due to political immunity, Ivan is set free.  But Magnum captures him, and while Magnum holds a gun on Ivan, they have this conversation:

Magnum:  It was all planned, back at Duc Hue?

Ivan:  Not specifics, not even target.  Just trigger.

Magnum:  How many others are out there like TC?

Ivan:  You are still a schoolboy, Thomas, using schoolboy tricks.

Magnum:  No tricks.  Who’s next on your hit list?  Begin?  Thatcher?  Reagan?

Ivan:  I have a plane to catch.  If you are going to shoot me, do it now… You won’t.  You can’t.  I know you, Thomas.  I had you for three months at Doc Hue.  I know you better than your mother.  Your sense of… honor and fair play.  Oh, you could shoot me—if I was armed and coming after you.  But like this—Thomas…never.  Goodbye, Thomas.

Ivan says Do svidaniya, turns, and walks away.  Magnum stops him.

Magnum:  Did you see the sun rise this morning?

Magnum shoots him in cold blood.

One of the reasons this episode was so effective was that up to now, Thomas Magnum, P.I., was played as an extremely likable character.  He’s endearing, he’s comic, he’s vulnerable, and often insecure.  He’s faithful.  He makes mistakes.  He lives from hand-to-mouth.  He can be incredibly lazy.  So much like us, in fact, that we forget that he is a Navy SEAL, that he’s trained to kill, that he’s seen and done things that he would rather forget, that we would find horrific.

This episode is a slap in the face, a bucket of ice water sloshed over our bodies, a lightning bolt.  “Holy Shit!” we collectively said.  “I forgot that he’s a Navy SEAL, that he’s trained to kill, that he’s fought in and survived a brutal war, that he’s seen and done things that are really, really ugly, and can still do them.”

Only children’s heroes are perfect.  As adults, we are bored by them.  Think of Star Trek: The Next Generation’s first seasons.  Be honest…it was pretty damn boring, wasn’t it?  (Really, if it hadn’t been Star Trek, I’m convinced it would have quickly been cancelled.)

Gaunt and Magnum are the best kind of heroes.

Those with feet of clay.

And for those who worship Joss Whedon, think about that before sending him to the Hellmouth.  And do the same for Kai Cole, okay?

I want to extend my sincerest condolences to ComicMix’s Mike Gold and Adriane Nash, whose beloved sister and aunt died on Saturday.  May Hashem and the Goddess bring all of you peace.