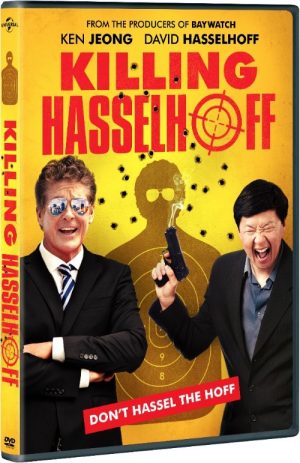 Never being a fan of Knight Rider, I never really paid attention to David Hasselhoff, but gathered he was a good-looking actor with limited range and skills. Somewhere along the way, he continued getting work in projects both good and bad and built a fan base (I hear he’s really big in Germany). As a result, I missed when he crossed the cultural equator and became comfortable with the ridicule and self-parody. He’s accepted where he fits in pop culture and has gone on to embrace it as witnessed by his hysterical ‘70s-era music video found on the Blu-ray of Guardians of the Galaxy Vol. 2.

And now, from Universal Home Entertainment, is Killing Hasselhoff, a direct-to-DVD release that finds him the target of an amateur assassin. This sloppy, slight comedy stars Ken Jeong as a nightclub owner in debt to loan shark Wasserstein (Will Sasso). Unable to find the $400,000 to cover the money owed, he’s given a chance to retire the obligation. As a member of the celebrity pool club, he is required to select a name and bump off whoever he picks to win the $567,000 grand prize and guess who that is?

“Then, of course, it also stars David Hasselhoff, who, in all sincerity, I can safely say is the coolest motherf*cker on the planet. That man is wholly responsible for this project coming to fruition. Yes, David Hasselhoff, Mitch Buchannon himself, is responsible for me realizing my lifelong ambition. That’s a real sentence,” wrote screenwriter Peter Hoare about the experience.

No doubt, it sounded like a good idea and perhaps it read better on paper than on screen. The film clocks in at a mercifully brief 80 minutes and despite Hasselhoff and an assortment of celebrity cameos including Kid Cudi, Hulk Hogan, Spice Williams, Howie Mandel, Gena Lee Nolin and Pat Monahan, the film just doesn’t work. (By the way, listen for the voice of K.I.T.T., and see if you recognize Justin Bieber.)

Chris is also distracted by his on the rocks relationship with school teacher girlfriend Ann (Jennifer Ikeda), a sub—lot that does more to distract than illuminate Chris’ character.

The humor is broad and clearly, Chris will never manage to kill Hassel, so the sequences need to be inventive, creative, and outrageously funny. Deciding he wants the prize money himself, Wasserstein sends gay hitman Redix (Colton Dunn) after The Hoff, further complicating Chris’ life. Wasserstein furthers the madness by deciding to save money on the hitman and sends his thug Nick (Dan Bakkedahl) to do the deed. Three men, none able to kill Hasselhoff. A formula for laughs, right?

Sure, there are some laughs and chuckles here and there, but really, it’s just not particularly bad enough to be good or just plain good. The film was shot back in 2014 and has lingered until the release this Tuesday.

Director Darren Grant’s staging of the “accidents’ intended to end Hasselhoff’s life lack verve and he pads his production with topless men and women to distract audiences from how thin this production is.

The DVD looks and sounds fine and the DVD comes with six Deleted Scenes (8:27), none of which would have improved the overall film.