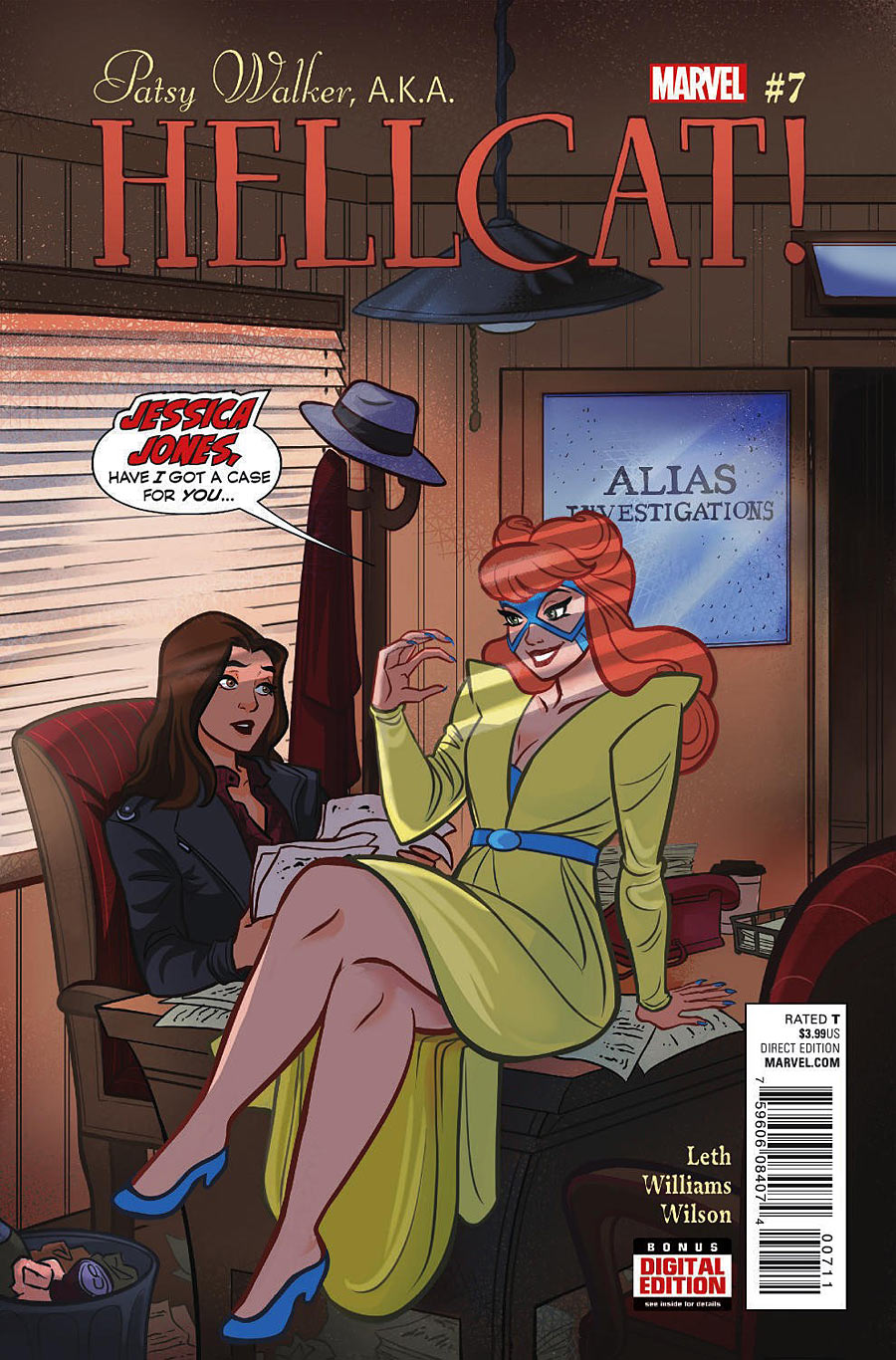 Childhood friends turned bitter enemies. Sounds like the stuff of soap operas, not to mention more than a few recent comic books. And so we have former childhood frenimies and comic book characters Patsy Walker and Hedy – not Hedley – Wolfe. Nowadays, when they think about their shared past it’s angst for the memories.

All because of Patsy’s mother. When Patsy was a teen, her mother, Dorothy Walker, exploited Patsy by writing a series of teen humor comic books starring Patsy and Hedy. Patsy was embarrassed by them, but her mother wouldn’t stop writing them. That caused a rift between Patsy and her mother. Of course, the fact that when Patsy’s mother was dying she tried to sell Patsy to the Devil so that Patsy would die instead of her probably didn’t help their mother-daughter relationship. It makes Joan Crawford’s hanger management issues look like Mother-of-the-Year stuff.

Dorothy and Patsy didn’t get along. Hedy, on the other hand visited Dorothy frequently and paid Dorothy’s hospital bills. So Dorothy asked Hedy to write up a contract granting Hedy all the rights to the Patsy and Hedy comic books, which Hedy did. Now Hedy is reprinting all those comics, much to the rekindled embarrassment of Patsy. And her re-Nooked embarrassment, too.

Patsy, who is also the super heroine Hellcat, hired Jennifer Walters, attorney-at-law when she’s not being the super heroine She-Hulk, to represent her against Hedy and recover the rights to the comic books. Jennifer, in turn, hired former super heroine and now owner/operator of the Alias Detective Agency, Jessica Jones to investigate the case. (Hellcat? She-Hulk? Jessica Jones? I think this book has a heroine addiction.)

Jessica’s investigations led her to believe that a dresser Hedy had in her living room deserved to be checked out. So in Patsy Walker, A.K.A. HELLCAT! # 7, Jessica and Hellcat broke into Hedy’s apartment and found Dorothy’s medical records in the dresser.

Jessica took a picture of the records and texted it to Jennifer. From those records Jennifer learned that when Dorothy signed the contract with Hedy, Dorothy was on a heavy morphine drip and mentally incapacitated. How incapacitated? Well, let’s just say she tried to sell her own daughter to a demon so she was like a mint tablet that couldn’t be turned into fertilizer; non-compost Mentos.

That was Jennifer’s legal argument, anyway. Hedy’s counter argument was that the evidence was obtained illegally so wasn’t admissible. As this is Patsy’s comic book, guess which argument won. If you guessed Patsy, then you won.

Okay, our case isn’t a theft case, it’s a civil suit over contract and copyright issues. And my stolen property argument is a more of a straw man than Ray Bolger. The question is, if someone in a civil trial obtains evidence illegally and gives it to one of the lawyers, can that lawyer use the evidence in the case?

There is, however, a wrinkle to the general rule that would have some bearing on admissibility in this case. Jennifer hired the Alias Detective Agency to obtain evidence in the case, so there are agency problems.

No, not problems with the Alias Detective Agency, problems with the fact that Jessica was Jennifer’s agent. When Jessica and Patsy broke into Hedy’s home, they were acting on the behalf of Jennifer. The fact that Jennifer didn’t order them to do this doesn’t matter, they were still acting as Jennifer’s agents because she had hired Jessica to obtain evidence in the case.

Don’t think that settles the matter, though. We need to break out the starch, because there is a wrinkle to this wrinkle. Jessica and Patsy didn’t actually take the hospital bills, they just photographed them. So they didn’t obtain any evidence illegally, they only found evidence illegally. The evidence was obtainable through perfectly legal avenues. All Jennifer had to do was have Patsy, Dorothy’s next-of-kin, request Dorothy’s records from the hospital. After the hospital supplied the records, Jennifer would have obtained the evidence legally and it would probably have been admissible. When Jessica pointed this out, Hedy made like the Carlsbad Caverns and caved.

The fact that Jennifer needed Jessica to find this evidence in the first place makes me wonder how good of a lawyer Jennifer is. If I had a client who wanted to void a contract signed by a mother who was in the hospital and dying, the second thing I would have done was have the client request the mother’s medical records to see whether the mother was on any mentally-incapacitating drugs. The first thing I would have done is make sure the client’s check cleared.

Still, all’s well that ends well. One page and three days (according to a caption) later, Hedy settled out of court and surrendered all the rights to the comics back to Patsy and the Patsy-Hedy childhood rivalry story finally ended. And it was about time, if you want my fr-angst opinion.