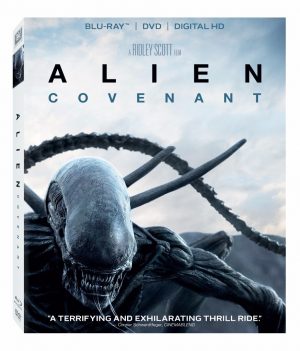 Amazingly, Ridley Scott’s Alien: Covenant opened in June and is already out on video disc. The film’s lackluster reviews and weak box office had 20th Century Home Entertainment get this out to begin bringing in the cash the film failed to generate. The good news is that the movie is better than you were led to believe and the disc’s special features are well worth a look.

Picking up 10 years after Prometheus, this film finally begins to fill in the backstory of the acid-spewing Xenomorphs. The biggest challenge with this entry is that Scott declares in one feature he wanted to scare the shit out of his audience but had to contend with viewers who have had nearly 40 years of chest-bursting, hissing, tail-wagging, nasty bug-like beasties chasing and eating humans. Thankfully, he’s up to the challenge by finding fresh angles and editing techniques to shock his audience even when we’re expecting the set pieces.

In the film, which boats a story from Jack Paglen and Michael Green and screenplay by Dante Harper and John Logan, the USCSS Covenant has landed on the world of Prometheus, discharging its 2000 sleeping colonists on the planet after receiving an S.O.S. from the last film. They find David (Michael Fassbender), the sole survivor, largely because he’s a wickedly clever android and less tasty to the Xenomorphs.

Meantime, Captain Oram (Billy Cudrip), Daniels (Katherine Waterston), her android Walter (Fassbender), Tennessee (Danny McBride) all find themselves reacting to this new, dangerous world, reacting in some interesting and fun ways. Daniels’ husband (James Franco) is among the earliest victims and her processing this sudden loss colors her for the rest of the story.

As you may recall, the Engineers were introduced in that film and now we expands on that

In addition to the Xenomorphs, we get some new creatures — the Hammerpede, the Trilobite, a Mutated Fifield – but they all lack that jaw-dropping wow factor. What is far more impressive are the Neomorphs which are the first glimpse of the Xenomorphs’ origin. David dropped a pathogen into the world’s eco system in the previous film and now it has introduced new life which introduces itself through the anticipated chest-burster moment but Scott wisely upends expectations.

From there, with Xenomorphs on the loose, the body count begins to grow, the blood flows, and it becomes a race to see who will be the last human standing. Visually, the movie is a strong production showing Scott is still an innovative director, even if the story isn’t as strong as it should be. He’s aided by interesting production design and a nice score from Jed Kurzel.

The film is out in the usual assortment of formats and the 1080p high definition transfer to Blu-ray is just lovely. It is well matched with the DTS-HD Master Audio 7.1 (Dolby Atmos was saved for the 4K Ultra HD release).

The film comes with a nice assortment of Special Features including Scott’s Audio Commentary which is informative if not spectacular; Deleted and Extended Scenes (17:58), a dozen pieces that are interesting but not vital to overall film story; Master Class: Ridley Scott (55:25) is the behind the scenes piece, split into four parts; David’s Illustrations, a detailed look at the android’s designs with handwritten annotations so it’s a nice in-world piece; Production Gallery; and two theatrical trailers.