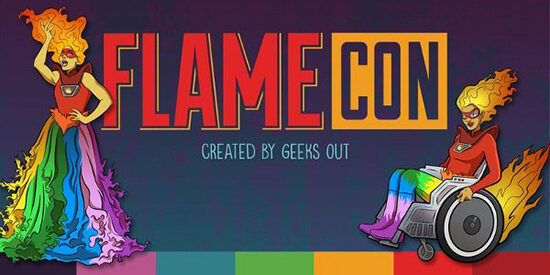 This column going up marks the first full week of our Kickstarter campaign for Mine!, our comics anthology to benefit Planned Parenthood. As of this typing, we’re 44% funded. Not bad for one week.

And a busy week at that. It’s been all hands on deck over at ComicMix and Molly Jackson and I have spent time together than we’d care to discuss. It’s a wild ride, and we still have a few weeks to go.

One of our stops on said wild ride was Flame Con. I’ve been going since the first one in 2015 and have tabled at the past two. This year Molly printed out a lot of fliers, brought recording equipment, signs, and coffee. That last part may have been the most important. 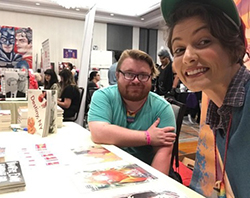 We had quite a few of our Mine! contributors at the con including Sina Grace, Justin Hall, Marc Andreyko, Pat Shand, Amy Shand, Mags Visaggio, Aria Baci, Alexa Cassaro, Stevie Wilson, Robby Barrett, Rosalarian, Tee Franklin and Fabian Lelay. Molly took some great pictures with everyone, got fliers to their tables, talked us up at panels, and more. We were also approached by people about potential venues for book release parties and signings. One of the people that approached us about that was our contributor Andrea Shockling, who is illustrating ComicMix own Mindy Newell’s story. It was wonderful to get to see so many friends and meet contributors that I hadn’t previously gotten the honor of doing so.

Flame Con, as always, is a positive experience for me. I’ve tabled both years with Robby Barrett and he always does well with his prints. Steven Universe and Pokémon are both still real popular at this convention.

Okay, I know this is short and I didn’t really get into much, but working on this Kickstarter is time-consuming and I have to get right back to that. Thank you so much to everyone that’s pledged and spread the word so far. Keep spreading the word about the Mine! Kickstarter and I’ll be back next week to complain more about how tired I am.