Originally, Archie Andrews and his pals at Riverdale High reflected the codification of teenage life, as they had more leisure time and disposable income. Once it hit big, the comic series and its infinite number of spinoffs, became stuck in amber, barely trying to keep up with changing trends (other than fashion) or concerns for teens. By the 2000s, the entire company was on the ropes, increasingly irrelevant in a rapidly changing world.

In comics, they threw a Hail Mary, revamping the writing and art, making the characters look and act in contemporary ways. Thanks to Mark Waid, Adam Hughes, Chip Zdarsky, and a few others, the characters were suddenly cool once more. The company’s product mix suddenly had the classic digest reprints, the new look, some Zombie title and they were saved.

During all this, Greg Berlanti brought his magic touch, bringing the comic to the CW, working with Archie’s Chief Creative Officer Roberto Aguirre-Sacasa, to reimagine the gals and pals. What we got was the thirteen episode Riverdale series which twisted the classic figures beyond recognition as they largely avoided the real issues teens confront today in favor of the tried-and-true murder mystery arc.

I’ve taught sophomores so I can say with some assurance the 10th graders on the show do not look, speak, or act like the ones in my classroom. They are worried about grades, college, money, sports, social media, video games, and each other. On this show, the students apparently never have homework or test pressure nor did the looming PSATs cause a single one to break a sweat. The thread about the jocks’ notebook keeping score on the girls was good but its consequences never were seen. 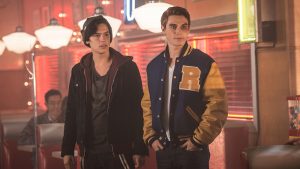 Also, the casting brings a new bevy of attractive men and women to the network, asking them to play teenagers and, like Smallville, it doesn’t work. KJ Apa is way too old to plausibly play a 15 year old. Most of his peers look younger and are (mostly) more believable.

It also must be a network rule that no one on the series can be older than 50 so you have an overly youthful faculty and administration – no variety and no wisdom to be shared. That, apparently, has to come from the parents and they’re a sorry, messy lot. Most grew up in Riverdale so the rivalries and unrequited loves remain simmering beneath the surface but with the exception of Fred Andrews (Luke Perry), not appear good at parenting.

Tonally, the series is flat without vibrant doses of teenage humor mixed in with the angst of puberty as they grow into their adult selves. Archie is the everyman, kind hearted and good-natured, but a royal klutz that you can’t help but adore. At least he’s like that in print.  Here, he’s a buff athlete with the heart of a songwriter, who eagerly engages in an affair with Miss Grundy (Sarah Habel), who, of course, was not really Miss Grundy. 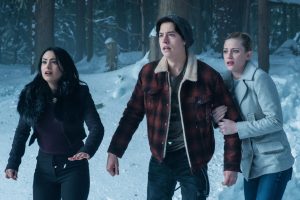 Spoiled rich girl Veronica (Camila Mendes) arrives in Riverdale, our focal point to learn about her new home, but she’s out to reinvent herself as a better person. Thankfully, her steel hasn’t melted entirely as she comes to the aid of her new friends time and again. Along the way, she has bonded with Betty Cooper (Lili Reinhart), the girl next door. However, she’s on Adderall and under pressure to be perfect, being strangled by her over-protective mother (Mädchen Amick), who is petrified of losing her as she has lost her oldest girl, Polly (Tiera Skovbye), now in a “facility”.

Polly, it seems, had a romance with the now-dead Jason Blossom (Trevor Stines), something that shattered her, or so we’re told through most of the season. Who kiiled Jason? The investigation, which could have been used to shed a light on the underside of the town, is an intermittent thread with way too many other soap elements added. About the one person who seems aware of it all is Jughead Jones (Cole Sprouse), who has gone from hamburger munching slacker to budding novelist and professional cynic. Often it is Jughead who carries the meandering plots from one set of characters to another, leading Betty and then the gang on the investigation. 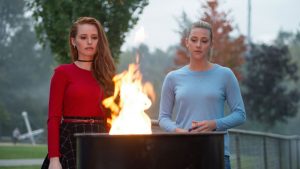 The final two episodes wrap up the murder of poor, creepy Jason and shift to new threads, setting up the second season and then, because Berlanti can’t seem to help himself, ends on a cliffhanger with poor Fred shot.

It is not remotely similar to the comics – new or old – and seems designed to let Berlanti retread his first hits with Dawson’s Creek and Everwood. Now, those themes and issues from these shows are frozen in time, robbing Riverdale from being a successful adaptation of the comic or an updated look at today’s teens.

The three-disc set includes all thirteen episodes and most come with a handful of deleted scenes, some of which are missed from making the characters more interesting. There are a number of special features including the Riverdale: 2016 Comic-Con Panel; Riverdale: The New Normal, a chance for the producers to justify their choices; Riverdale: The Ultimate Sin, “I Got You” and “These Are Moments I Remember” musical videos; and a Gag Reel.