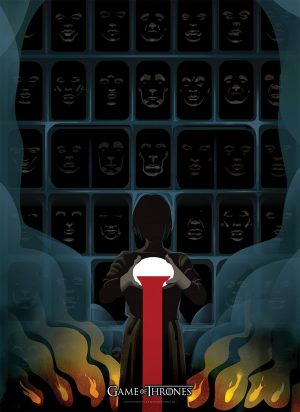 The hit HBO series Game of Thrones is brutal, but our Game of Thrones puzzles are beautiful—they’re Beautiful Death, to be precise. Best known for his original creations at BeautifulDeath.com, HBO’s official episode-by-episode guide to the most iconic deaths on Game of Thrones, Robert M. Ball’s breathtaking artwork seems to pop right off the table as you assemble these 1000-piece puzzles. Measuring 19 by 27-inches, they’re large enough to capture the intricate detail of these artworks.

Long May She Reign is the artwork for season 6, episode 10, “The Winds of Winter”, marking Cersei’s successful ploy to destroy the Great Sept of Baelor and claim the Iron Throne for herself. The haunting details of the skulls and red-to-green color transition invoke an otherworldly, awe-inspiring feeling.Violence is a Disease is Ball’s rendition of season 6, episode 7, “The Broken Man.” With vivid red accents trailing across the canvas and the fearsome blade on the axe, this riveting work pays tribute to the Hound and his re-emergence into the story after the death of the Septon that helped him heal and find a new purpose in life. The axe he lifts symbolizes that he rise again with a vengeance.

Dracarys! from season 3, episode 4 is a vibrant homage to the Mother of Dragons. It captures the essence of one of the most epic moments in the series, when Daenerys releases her dragons to help free the slaves of Astapor.We Never Stop Playing from season 5, episode 6 takes Jaqen H’ghar’s words and frames life among the Faceless Men of Braavos. The eerie confines of the House of Black and White take on new life in Ball’s art.Season 6, episode 5 features one of the most notable and tragic deaths in the series when fan-favorite character Hodor sacrifices his life to get Bran Stark to safety. Ball has taken great care to immortalize this moment in Hold the Door. The deep melancholy of the moment seems to infuse the art, making it evocative of the pain many fans experienced while watching events unfold.

Your Name Will Disappear is a gorgeous tribute to vengeance and lost innocence, marking the moment in Season 6, Episode 9 when Sansa Stark releases Ramsey Bolton’s hounds to finish him off after The Battle of the Bastards. The contrast of the red hair against the dark confines of Winterfell and black coats of the dogs is magnificent.

Our whole Beautiful Death line of puzzles is available now, so be sure to chase them down—you don’t want to miss out! Robert M. Ball’s artistry lies within each of these boxes, waiting for you to put it on full display. Long May She Reign and Violence is a Disease are available at fine game and toy stores everywhere, while the other four puzzles are exclusive to Barnes & Noble.