The Law Is A Ass #415: The Green Hornet Throws A Tamper Tantrum 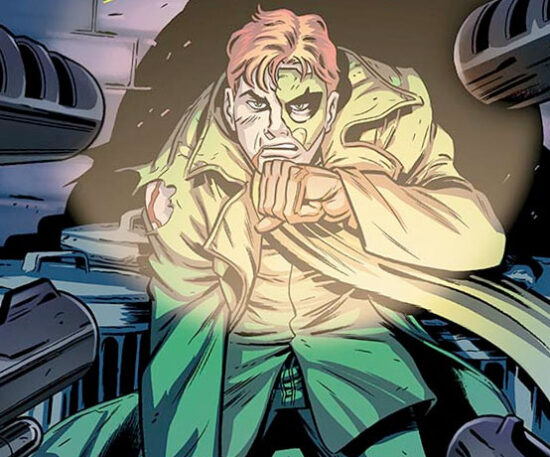 I think the Green Hornet is starting to believe his own press clippings.

The Green Hornet is a hero who pretends to be a villain. By day he’s Britt Reid, publisher of Chicago’s The Daily Sentinel newspaper. At night, Britt dresses up as the Green Hornet and pretends to be the secret crime boss of Chicago. He uses his guise as a villain to infiltrate criminal organizations and thwart them. And get the bad guys arrested. So sometimes he does some bad things but for the right reasons. Only now I think he’s starting to believe he is a criminal, because in The Green Hornet: Reign of the Demon #1, he started doing bad things for the wrong reasons.

According to the back story of Reign of the Demon, several months ago the Green Hornet took down crime lord Vito Cerelli. Apparently, the Hornet indicated that he was going to retire and some people believed that nonsense. I called it nonsense because, like nature, organized crime in comic books abhors a vacuum. As soon as one crime boss is overthrown, another comes in to take over. Making the Green Hornet needed all over again. Let’s face it, The Green Hornet had about as much chance of retiring as all 5’7” of me has of slam dunking on Dikembe Mutombo. Britt Reid’s former secretary, Lenore Case, was one of those people who believed he was going to retire the Green Hornet and she didn’t think that was a good idea. So she set out to change his mind. By robbing a bank as the Green Hornet.

Britt didn’t want Lenore to “rot in prison” so he devised a plan to spring her. The Green Hornet and Kato broke into police headquarters. They stole the Green Hornet costume Lenore used from its box in the Evidence Room and replaced it. When the district attorney took what he thought was a Green Hornet costume out of the box to show the jury, he pulled out a clown costume instead.

The trial judge gave the prosecutor a one-hour continuance to try to find the physical evidence, which, obviously, the prosecutor couldn’t do. So one hour later, because, “the state has evidently misplaced all of its supposed evidence against Miss Case,” the judge dismissed all the charges against her. Moreover, given that the trial had started when the judge dismissed the case, Lenore couldn’t be tried again. Once a trial has started, jeopardy has attached for double jeopardy purposes and if the case is dismissed, the defendant can’t be tried again. So Lenore walked on the bank robbing charges, not just then but for all time.

Usually when the Green Hornet does something bad, it’s to stop a criminal operation and bring the criminals to justice. Here the Green Hornet tampered with evidence and obstructed justice – both felonies so I’d call them bad things – to keep a bank robber from being convicted and punished. That’s not a good thing, that’s another bad thing.

If it’s not bad enough that the Green Hornet let a bank robber escape justice, he also hurt other people in the process. Remember, Lenore did rob the bank. So the prosecutor wasn’t doing anything wrong when he prosecuted her. And the police officer in charge of the evidence room was doing what he was supposed to do by storing Lenore’s Green Hornet costume as evidence to be used against her in trial. But the Green Hornet made these two innocent officers of the law look incompetent and have probably ruined their careers in the process. And all to help a guilty bank robber. So, yay!

Of course, the Green Hornet had help in obstructing justice in Lenore’s case from the least likely source. The judge presiding over the trial.

The chief of police didn’t say, “Someone wearing a Green Hornet costume just robbed a bank, round up the usual suspects. Oh, and while you’re at it, better bring all the secretaries in the city for good measure.” No, the police have to have followed some trail of evidence which led them to Lenore. The story didn’t say what that evidence was but it doesn’t matter what it was. What matters is that there had to have been some evidence which led the police to Lenore Case. Evidence other than that Green Hornet costume which disappeared.

The prosecutor could still have tried the case against Lenore. He could have introduced all of the other evidence that led the police to Lenore in the first place. He could then have introduced the testimony of the officers who arrested Lenore and found the Green Hornet costume in her possession. There was enough other evidence that the case could – should – have gone forward.

Sure the defense attorney could have attacked the credibility of the state’s case, because someone misplaced the Green Hornet costume. And maybe the jury would have found her not guilty for that reason. But that was no reason for the judge not to let the trial continue. The state had other evidence and it should have been allowed to make its case as best it could.

Makes me wonder what they taught that judge in judging school. Other than how to be snarky, that is.